Iron contained in smoke particles fertilized a giant stretch of the Southern Ocean, resulting in an algal bloom that absorbed about as much CO2 as the fires put out

In 2019 and 2020, bushfires razed more than 18 million hectares of land in Australia. For weeks, smoke choked major cities, leading to almost 450 deaths, and even circumnavigated the southern hemisphere.

As the aerosols billowed across the oceans many thousands of kilometres away from the fires, microscopic marine algae called phytoplankton had an unexpected windfall: they received a boost of iron.

Our research, published September 15 in Nature, found this caused phytoplankton concentrations to double between New Zealand and South America, until the bloom area became bigger than Australia. And it lasted for four months.

This enormous, unprecedented algal bloom could have profound implications for carbon dioxide levels in the atmosphere and for the marine ecosystem. But so far, the impact is still unclear.

Meanwhile, in another paper published alongside ours in Nature today, researchers from The Netherlands found the amount of carbon dioxide emitted by the fires that summer was more than double previous estimates.

Iron fertilizes phytoplankton and helps them grow, in the same way nutrients added in soil help vegetables grow. And like plants on land, phytoplankton photosynthesize — they absorb CO2 as they grow and produce oxygen for fish and other marine creatures.

We used satellite data to estimate that for phytoplankton to grow as much as they did in the Southern Ocean, they would have absorbed 680 million tonnes of CO?. This means the phytoplankton absorbed roughly the same amount of CO? as released by the bushfires, according to the latest estimates released today.

The Dutch researchers found the bushfires released about 715 million tonnes of CO? (within a range of 517–867 million tonnes) between November 2019 and January 2020. This surpasses Australia’s normal annual fire and fossil fuel emissions by 80 percent.

To put this into perspective, Australia’s anthropogenic CO? emissions in 2019 were much less, at 520 million tonnes.

Phytoplankton can have dramatic effects on climate

If they sink to the deep ocean, then this represents a carbon sink for decades or even centuries — or even longer if phytoplankton are stored in ocean sediments.

But if they’re mostly eaten and decomposed near the ocean’s surface, then all that CO? they consumed comes straight back out, with no net effect on the carbon balance in the atmosphere.

Himawari satellite image showing the January aerosol plume stretching over the South Pacific. Himawari-8, Author provided
In fact, phytoplankton have very likely played a role on millennial time scales in keeping atmospheric CO? concentrations down, and can affect the global climate in the long term.

For example, a 2014 study suggests iron-containing dust billowing over the Southern Ocean caused increased phytoplankton productivity, which contributed to reducing atmospheric CO? by about 100 parts per million. And this helped transition the planet to ice ages.

Phytoplankton blooms can also have a big impact on the marine ecosystem as they make excellent food for some marine creatures.

For example, more phytoplankton means more food for zooplankton that feed on phytoplankton, with effects up the food chain. It’s also worth noting this huge bloom occurred at a time of year when phytoplankton are usually in decline in this part of the ocean.

But whether there were any long-lasting effects from the bushfire-fuelled phytoplankton on the climate or ecosystem is unclear, because we still don’t know where they ended up.

The link between fire aerosols and the increase in phytoplankton demonstrated in our study is particularly relevant given the intense fire activity around the globe.

Droughts and warming under global climate change are expected to increase the frequency and intensity of wildfires, and the impacts to land-based ecosystems, such as habitat loss and air pollution, will be dramatic. But as we now know, wildfires can also affect marine life thousands of kilometres away from land. 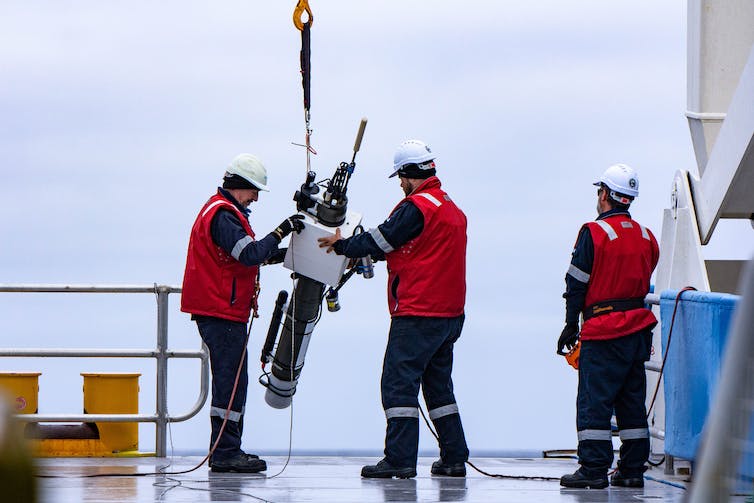 A robotic float being deployed on board the CSIRO RV Investigator. Jakob Weiss, Author provided

Previous models have predicted the iron-fertilising effect of bushfire aerosols, but this is the first time we’ve observed and demonstrated the connection at a large-scale.

Our study is mainly based on satellite data and observations from robotic floats that roam the oceans and collect data autonomously. These robotic floats are revolutionising our understanding of chemical cycling, oxygen variability and ocean acidification.

During the bushfire period, our smoke tracers reached concentrations at least 300% higher than what had ever been observed in the 22-year satellite record for the region.

Interestingly, you wouldn’t be able to observe the resulting phytoplankton growth in a true-colour satellite image. We instead used more sensitive ocean colour sensors on satellites to estimate phytoplankton concentrations.

For example, the Tasman Sea — between Australia and New Zealand — showed only mildly higher phytoplankton concentrations during the bushfire period, even though the smoke cloud was strongest there.

Was this because nutrients other than iron were lacking, or because there was less deposition? Or perhaps because the smoke didn’t stick around for as long?

Whatever the reason, it’s clear this is only the beginning of exciting new lines of research that link forests, wildfires, phytoplankton growth and Earth’s climate.

Christina Schallenberg is a Research Fellow at the University of Tasmania.

Jakob Weis is a Ph.D. student at University of Tasmania.

Peter Strutton is a Professor at the Institute for Marine and Antarctic Studies at University of Tasmania.

Weiyi Tang is a Postdoc in Biogeochemistry at Princeton University.