[By Megan Ewald, NOAA Office of Response and Restoration]

As the vessel speeds through the icy water in pursuit of whales, one researcher cocks and loads a crossbow, waiting for a dorsal fin to surface and the perfect time to strike. It’s a scene reminiscent of America’s maritime past, when commercialized whalers harpooned whales from wooden rowboats to harvest their oils and bones. Industrial whaling nearly wiped out some of America's whales, but today when scientists approach marine mammals such as whales and dolphins in small boats, they are on the hunt for information that helps protect them.

When oil spills and marine pollution occur in areas that marine mammals inhabit, scientists use a variety of techniques to determine if animals were exposed to or injured by pollution. This information helps hold polluters accountable and guides restoration projects. Remote biopsy is one of the ways scientists can study whales after pollution events.

Remote biopsy allows scientists to study marine mammals in the wild. Specially designed crossbows, spears, or pneumatic rifles are used to shoot a small dart at the animal, which takes out a small plug of skin and blubber about the size of a pencil eraser. The dart then bounces off the whale, holding onto the sample while floating at the surface for scientists to collect.

Remote biopsies are generally collected in two ways. Some marine mammals ride the waves off the bow of large ships, allowing scientists to take aim from the deck of research vessels. Other times small boats are deployed to get a closer look and determine if the marine mammal can be sampled. If the animal appears stressed, or if there are very young calves present, samples are not taken. From both kinds of vessels the dart is aimed behind the dorsal fin at the flank of the animal.

This method is beneficial for several reasons. Scientists don’t need to capture the animal to collect blood or tissue samples, which is an inherently stressful procedure. It also helps scientists learn about whales, which are too big to be captured and studied. Remote biopsies cause minimal disturbance to the targeted whale and creatures around them, and can provide a wealth of information to scientists. 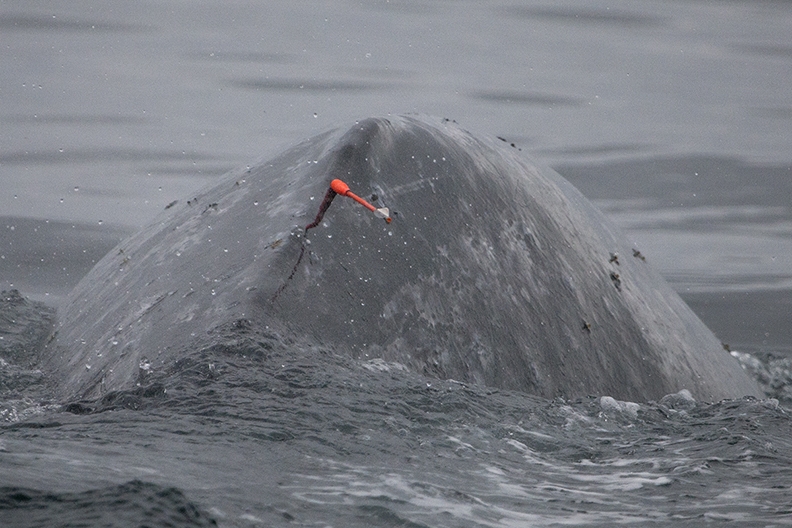 What Skin and Blubber Hold

Multiple types of analyses can be performed on the same remote biopsy sample, helping determine if marine mammals were exposed to and/or injured by an oil spill.

Hormones: Analyzing hormones found in blubber can inform pregnancy rates, allowing scientists to follow-up on pregnant animals to determine if the pregnancy resulted in healthy offspring.

Stable Isotopes: Analyzing the skin for stable isotopes gives scientists a glimpse into what animals are eating, if their diet has changed after a spill, and how marine mammal populations are genetically structured.

Oil and Chemical Compounds: Marine mammals metabolize oil-derived compounds very quickly, making it difficult to determine if an animal has been exposed to oil through remote biopsy. However, other classes of chemicals like persistent organic pollutants (POP) do accumulate in fatty tissues like blubber. This analysis can help rule out other kinds of pollution when assessing oil spill impacts to marine mammals.

Genomics: Certain gene networks respond to oil compounds in ways specific to different species, chemicals, and types of tissue. This can help determine oil exposure. However, more research is needed in this rapidly growing field before it is fully recommended for oil spill assessment.

Today instead of hunting whales for oil, Americans are searching for ways to protect them from oil spills and other hazards. After the Deepwater Horizon oil spill in the Gulf of Mexico, remote biopsy was employed to study common bottlenose dolphins, and this method has been widely used to study killer whales, beluga whales, gray and other large whales. Remote biopsy is an important part of NOAA’s toolbox of assessment methods, and researchers are working to further understand what we can learn from skin and blubber.

By collecting these small samples, scientists gather a whale of information that helps to protect marine mammals.