Seals May Use Sonar to Navigate Under Antarctic Ice

I’m sitting on the edge of a hole drilled through 15 feet of Antarctic sea ice, about to descend into the frigid ocean of the southernmost dive site in the world. I wear nearly 100 pounds of gear – a drysuit and gloves, multiple layers of insulation, scuba tank and regulators, lights, equipment, fins and over 40 pounds of lead to counteract all that added buoyancy.

I do a final check with my dive buddies: Air? Hoses? Weights? Then, one by one, we put in our mouthpieces, plop into the hole and sink out of sight into the dark.

As we frog-kick along, following our lights toward the work site, a Weddell seal glides by with a few effortless undulations. It glances sideways at us a couple of times, as if doing a double-take.

In contrast to us awkward, gear-laden human divers, Weddell seals are completely at home under the ice. They can hold their breath for over 80 minutes and dive to a depth of nearly 2,000 feet. Somehow they explore, find food and return to their isolated breathing holes even when it’s completely dark. 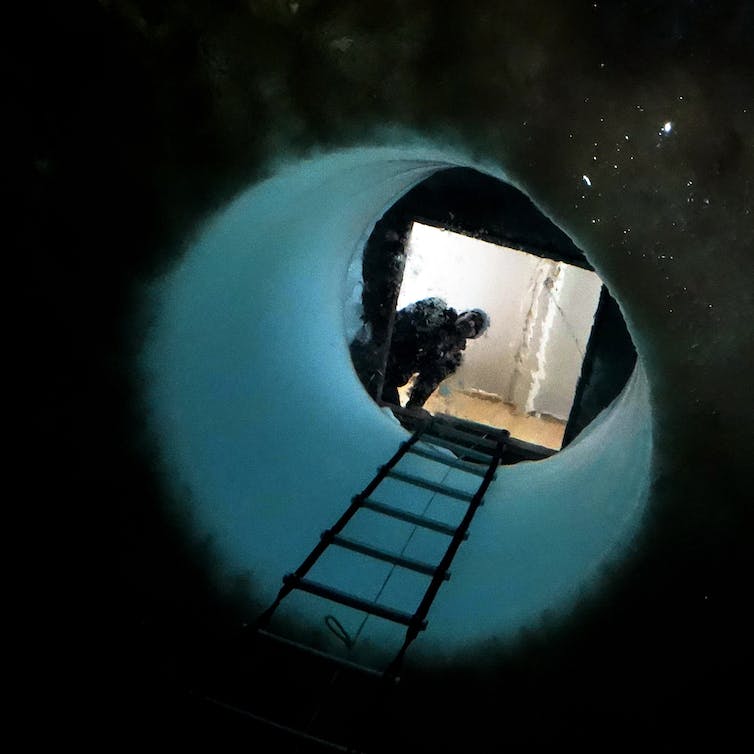 We, on the other hand, have about 30 minutes of bottom time before our hands get too cold to work. Then we make our way back to the dive line. Its flags and blinking lights guide us to our one and only way out.

During my deployment to Antarctica in 2018, I participated in 40 such dives to help maintain the McMurdo Oceanographic Observatory. Polar marine biologist Paul Cziko installed the 70-foot-deep, seafloor-mounted recorder in 2017. Known affectionately as “MOO,” it resembled R2-D2 in both looks and charm. For two years, MOO successfully sent continuous audio, video and ocean data back to our onshore lab via cable connection. It also streamed a real-time view of this enthralling Antarctic marine ecosystem: ice glittering on the seafloor and ceiling, giant sea spiders and isopods creeping among the sponges and soft corals. 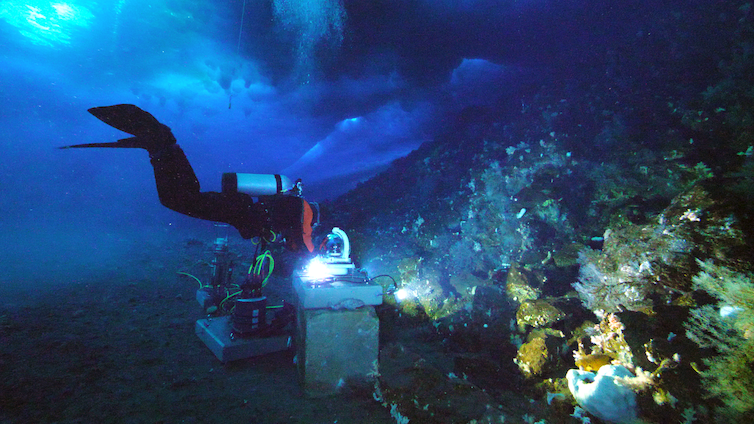 Seals were only occasionally caught on camera, but their haunting calls dominated the soundscape. Although the initial goal of the MOO was to support research on the ice-adapted fishes native to the area, analysis of the audio recordings led us to a surprising discovery. Weddell seals produce ultrasonic calls – sequences of chirps and whistles with frequencies well above 20 kHz, the upper limit of human hearing.

These newly discovered call types – nine in total, with base frequencies above 20 kHz and ranging up to nearly 50 kHz – are the first report of such high-frequency vocalizations in any wild seals, sea lions and walruses, the group of sea mammals collectively known as pinnipeds.

Although scientists have studied Weddell seals for many decades and described much of their diverse vocal repertoire, acoustic recording has historically been limited by time and equipment constraints. Most prior studies sampled within the human-audible range only for short stints during the Antarctic field season.

The MOO was the first long-term observatory of its kind, and its cutting-edge technology let us collect an unprecedented data set, including sounds with frequencies up to about 10 times higher than most previous studies.

Our discovery begs the question: What do the seals use their high-pitched ultrasonic calls for? One possibility is that they represent a form of active biosonar, similar to the echolocation used by bats and dolphins. That is, the returning echoes of their high-frequency sounds may provide information to the seals about their environment and potential prey.

Previous studies have argued that pinnipeds do not echolocate because they do not possess the specialized anatomy for producing or processing tightly focused sounds with very short time intervals. Additionally, their known calls don’t exhibit the telltale characteristics of echolocation pulses, such as accelerating in time as an animal approaches a target.

But the ability to use sound to “see” their surroundings would be especially useful during very low-visibility conditions – like what the seals encounter under thick ice or in the polar winter, when there is no daylight for four months. Our preliminary findings indeed suggested that the use of certain high-frequency pulsed vocalizations increased during the dark Antarctic winter. It is also very likely, and not mutually exclusive, that the seals use ultrasonic calls for communication, as has been shown for their human-audible calls.

It’s still a mystery how seals navigate and forage under the ice in certain conditions. Weddell seals and other seals that live on the ice have many adaptations for diving and finding their breathing holes again, including good low-light vision, spatial memory and extremely sensitive whiskers, called vibrissae.

However, these senses each have their limitations. Sometimes there may be literally no ambient light where the seals are diving. Following the same routes on every dive would preclude finding new patches of mobile prey. And the tactile sensation provided by whiskers is only useful at close range. 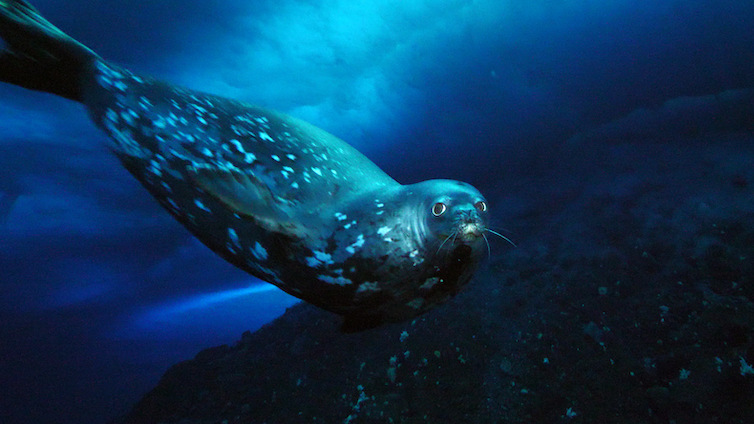 It seems obvious that seals would also use sound to gain information about their surroundings. Indeed, Weddell seals and other related species can hear frequencies up to at least 60 kHz, and researchers have found that seals use acoustic cues, when available, to navigate. However, actively emitting high-frequency chirps and interpreting their own echoes would definitely be a step beyond passive listening.

Back in the lab at McMurdo Station, the MOO livestream ran as we worked at our desks. The ethereal trills and chirps of seals filled the air. During their Southern Hemisphere spring breeding season, vocal activity is nearly constant. A couple of monitors showed real-time graphical displays of the incoming data: ocean temperature, salinity, tides. A scrolling audio spectrogram would pull us in every so often, mesmerizing us with colorful squiggles that appeared as we heard the calls – a synchronized visual soundtrack.

Every few minutes, bright wiggles and lines would scroll by in the upper register, announcing sounds that we cannot hear. They are patterned; they are repeated again and again. They are seal voices. If we can decode them, they may tell us more about how these seals thrive in what we humans perceive to be a very challenging environment. As technology sheds new light into the depths, what else will we find?

Lisa Munger is a marine biologist with more than 20 years of experience studying marine mammal sounds and behavioral ecology in habitats from the tropics to the poles. She is a career instructor at the University of Oregon.

This article appears courtesy of The Conversation and may be found in its original form here. Top image: A Weddell seal swims by as Paul Cziko works. McMurdo Oceanographic Observatory, CC BY-ND.