A “Noah’s Ark” of animals left homeless or abandoned has flown out of the British Virgin Islands with the help of the UK Royal Marines. Vulnerable pets and strays rescued by commandos were on the first commercial flight out of the islands’ main airport, which reopened thanks to the efforts of British soldiers and marines.

Teams from 40 Commando worked for two days around the clock to reinstate the perimeter fence around Terrance B. Lettsome International Airport. Much of the three-mile-long barrier was brought down by Hurricane Irma one month ago, meaning animals – or people – could stray on to the grounds.

The commandos also joined airport employees in clearing the site of debris which could have posed a danger to incoming and outgoing flights. Those efforts resulted in an island-hopping airliner to land at mid-day on Tuesday, bringing over 50 passengers to the British Virgin Islands. As they filed through the airport concourse and the airliner was refueled, outgoing passengers checked-in. Some on two legs. Some on four.

Irma destroyed 600 homes – leaving around 6,000 islanders (or more than one fifth of the populace) homeless, with another 3,600 properties suffering some form of damage, but still habitable. The disaster not only caused human misery, it’s also displaced many pets who fled their homes and were not reunited with their owners in the chaotic aftermath of the hurricane, while some householders wanted to get their animals off the islands until homes and services are restored. So waiting to be loaded on to aircraft was a series of travel cages for animals for adoption with the help of animal charities in the region. 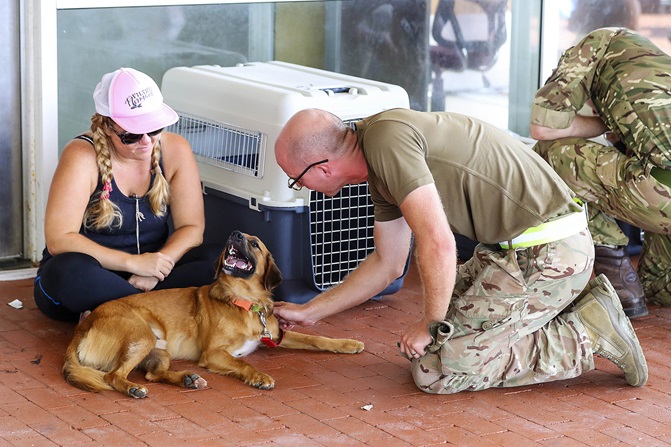 Among the four-legged friends, a Russell-cross rescued by members of the military only days before and named Willow. “We found her on a small beach only a few miles from the airport,” explained writer Leading Seaman Rose Gleghorn of 40 Commando. “She was sunburnt and dehydrated and in need of some attention. It’s great that she is going to get a new home.”

Four weeks after Irma hit, the military relief effort is now in its final stages. After her Atlantic dash to deliver aid with her helicopters, HMS Ocean is heading for Miami, her mission complete.

RFA Mounts Bay, the Navy’s permanent presence in the Caribbean this autumn, has now returned to Tortola to offload aid. She delivered two fire trucks – transported from the UK by the Dutch ship Karel Doorman – and fire-fighting/emergency kit to replace equipment operated by Tortola’s emergency services which was damaged by the storms.

And the final elements of 40 Commando, normally based at Norton Manor outside Taunton, are on the ground helping civilian authorities. Much of the marines’ recent efforts have been focused on getting schools up and running after a month’s hiatus. While some have been patched up and repaired ready to take pupils again, much of Tortola’s education infrastructure was wrecked. To fill this gap, makeshift schools have been established at both ends of the capital Road Town, with Royal Marines helping UNICEF and the Adventist Development and Relief Agency to put up the tents which will serve as the home for the temporary centres of learning.

This article appears courtesy of Royal Navy News, and it may be found in its original form here.