How to Protect Galapagos Marine Life from the Chinese Fishing Fleet

More than 300 foreign fishing ships, almost all Chinese, have been sitting in international waters surrounding the Galapagos Islands since late July. The islands, nearly 1,000 km from the coast of Ecuador, are best-known for their unique wildlife.

As these vessels are in international waters, their presence is technically lawful. They are reportedly fishing for squid and have been coming to this location for four years. However, the ecological reality is that fish do not recognise state boundaries and therefore fishing at this scale so close to the Galapagos Marine Reserve implies a serious risk for endangered, migratory species found within the protected area such as whale sharks and hammerhead sharks.

The news has led to an outcry in Galapagos. Locals there still clearly remember the 2017 capture of a Chinese fishing ship that was found inside the marine reserve with thousands of sharks onboard, including endangered species.

Back then, I was working at the Charles Darwin Research Station on the Galapagos Islands. I’ve since moved into academia, where I research the laws around marine protection. Based on my work in the area, I think strengthening the region’s existing legal frameworks could be a solution.

This latest incident is a stark reminder of the incongruous nature of the law of the sea, which recognises that the ocean is an interrelated whole yet takes a zonal approach to regulation that results in a mismatch between law and natural ecosystems. International waters, or the “high seas”, make up 61% of the ocean but a fragmented legal framework allows only weak regulation of human activities.

Overfishing is one of the key drivers of biodiversity loss in the oceans. With no overarching legal framework in place for designating marine protected areas on the high seas, just one percent of international waters are protected.

These failings prompted the international community to begin negotiations in September 2018 to create a new legal instrument governing the conservation and sustainable use of marine life on the high seas. This is a promising development, though its scope is limited to four specific issues, one of which deals with creating specially protected areas.

However it is still not clear whether high seas fishing, currently managed on a regional basis by organisations of relevant countries, will be included in the negotiations. Furthermore, the final round of talks has been postponed due to the COVID-19 pandemic. For cases such as the Galapagos, it may be more practical to simply strengthen existing regional cooperation and ocean governance.

Ecuador is a member of the United Nations Regional Seas Programme for the South East Pacific. This deals with protection of the seas around the member states in this region, but in the adjacent high seas it has only a narrow mandate restricted to pollution. However it is looking to expand its interests in the high seas where it currently has no authority to create protected areas.

The Regional Seas Program has a lot of support as a coordinating mechanism. For example, it has signed agreements with regional fisheries management organisations, which have the power to establish temporary fishing closures in the high seas. Given that fishing is a key socio-economic activity in the region, this type of cooperation between an environmental protection agency and fisheries management bodies is an important step in the right direction. However, empowering this body with a mandate to establish its own protected areas would be a better way to protect a wider spectrum of marine life.

Given the lack of a strong ocean governance regime in the region, four states decided to come up with their own solution to better protect their surrounding waters. Back in 2004, Ecuador along with Costa Rica, Panama and Colombia established the Eastern Tropical Pacific Marine Corridor (CMAR). The overall goal of CMAR is to jointly conserve the rich marine biodiversity in this region, with Galapagos and other marine reserves eventually forming the first transboundary network of marine protected areas in Latin America. 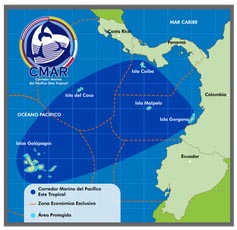 The ‘marine corridor’ links Galapagos and other islands in the Eastern Pacific. CMAR

The proposed map of the marine corridor includes the high seas between the Galapagos Islands and Ecuador mainland. However without a legal framework for protected areas on the high seas, the eventual corridor will only be able to encompass areas within the jurisdiction of the participating states. There are still significant legal barriers, even when the political will is there.

The CMAR marine corridor is within an area of immense ecological value, recently listed as a “hope spot” which are special places deemed critical to the health of the ocean. As a political initiative, it offers the possibility of harmonising the region’s marine law. Public outrage over fishing near the Galapagos may propel states to finalise the marine corridor and perhaps drive increased cooperation in the region.

A coherent regional position with regard to common threats such as overfishing would carry more weight at the international level. This could make a big difference diplomatically, especially when dealing with large fishing fleets flying the flag of a global superpower.

Sarah Ryan Enright is a PhD Researcher, Marine Environmental Law at the University College Cork. This article appears courtesy of The Conversation and may be found in its original form here.