Digitization Takes Another Step Forward With DP World and TradeLens

Heads bowed in reverence, sailors and Royal Marines pay their respects over one of the most hallowed sites in Royal Navy history. The location 3°33′36″N, 104°28′42″E – the South China Sea, 75 miles east of the Malaysian city of Kuantan. Beneath this location lie the wrecks of HMS Prince of Wales and Repulse, last resting places of 840 men killed when the battleship and battle-cruiser were sunk by Japanese bombers in December 1941.

Seventy-seven years on and Devonport-based frigate HMS Sutherland paused as the sun set over the location for a service of remembrance.

The act was particularly poignant for the men and women of the Sutherland; their ship sailed from the very same dockyard in Singapore and passed through the exact waters as their forbears in 1941. Brand-new Prince of Wales and the veteran battle-cruiser – armed like a battleship, but without the same armour protection – HMS Repulse were dispatched to the Far East in the autumn of 1941 by Winston Churchill to deter Japanese aggression.

They did not; when the Japanese invaded Malaya, the two capital ships – collectively known as Force Z – were dispatched from Singapore to halt the attacks. Instead, they fell prey to medium and torpedo bombers. Within two hours, first Repulse, then Prince of Wales were lost.

Lt Max Cosby, Flight Observer (navigator/warfare specialist) in Sutherland’s Wildcat helicopter, outlined the battle – and the fate of the men – for his shipmates. "It is easy for history to become merely a list of facts, so to be able to draw on first-hand accounts of the battle from stokers and gunners made it much easier to close the gap of seven decades,” he said. “I have been fascinated by the story of Force Z since I was a young boy, so it was very special for me to be involved in commemorating their loss over the wrecks themselves.” 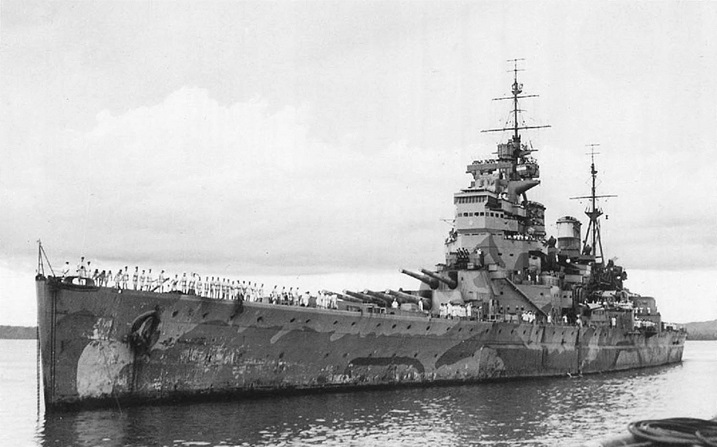 Engineer ET(ME) Jacob ‘Eddy’ Edwards was struck by how similar his plight might be to the stokers keeping Prince of Wales going in the heat of battle. “Hearing the stories from the sailors on-board during the battle really makes you think about it, and how they were just like us," he said. “The photo on the order of service showing the escorting destroyer taking off men from Prince of Wales as she began to capsize made me realise just how quickly things can change in a warship.”

A wreath, dedicated to the men of Repulse and Prince of Wales and their families, was laid at the edge of the flight deck by Commanding Officer Cdr Andrew Canale, ahead of a minute’s silence at the going down of the sun. 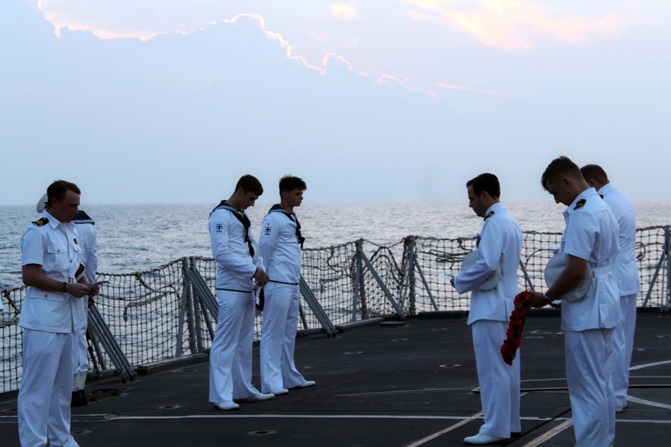 “Seventy-seven years ago the Royal Navy was engaged with the forces of Japan, but fortunately we are now allies once more, and in the last few months we have continued to build a strong partnership with our naval counterparts from Japan.

“These relationships are key to the UK’s future in the Asia Pacific region and I know we will continue to remember our forebears whilst looking to the present and the future.”

Digitization Takes Another Step Forward With DP World and TradeLens

The push towards digitization in the shipping industry took another step forward with the announcement by ports operator DP World that it has completed the early stages of integration with TradeLens, a blockchain-based digital container logistics platform. The announcement from DP World, which handled more than 71 million TEU containers in 2019, came just days after the non-profit industry group, the Digital Container Shipping Association (DCSA), announced an initiative to drive digitalization. Calling for collaboration to establish protocols and standards,...

Over the past week, a group of residents in Haramsøya, Norway have repeatedly blockaded a local ferry in order to prevent wind farm construction vehicles from passing. The protesters oppose the installation of a new nine-turbine onshore wind farm on top of a nearby plateau. On May 19, ferry operations on Norled's Skjelten route were briefly disrupted when activists blocked the disembarkation of construction vehicles. Service was quickly restored. A similar action occurred on Tuesday, and the activist group upped...

Stockholm Norvik Port marked an important milestone in the development of the new port with the arrival of its first container ship. Construction had begun in September 2016 on the new port, which is designed to support the efficient flow of goods into the Stockholm region, one of Europe’s fastest-growing capital cities. Built as a replacement to the container terminal at Frihamnen in central Stockholm, the new port when completed with include both RoRo and container terminals. The port will provide...