Royal Marines are harnessing technology used to find fish in shallow waters to perfect beach reconnaissance for their landing craft to move in safely and put troops and their kit ashore without mishaps.

They are testing the Hummingbird 10 system - the latest technology leap taken by the Corps since it held an ‘innovation day’ last year to showcase off-the-shelf tech which could improve the lot of commandos in the field under the RN’s DARE initiative.

It's already resulted in enhancements for sniper rifles and alterations to ORCs to carry smaller inflatable raiding craft.

Now it's assisting the ‘black magic’ - as 1AGRM’s C/Sgt John McDonald calls it - of recce’ing a beach. “Sometimes you get it right and everything lands first time and sometimes you do it right, but things still go wrong - and vehicles and craft get stuck,” he explains.

That’s not the fault of the reconnaissance teams, rather the kit and techniques used - both go back to before WW1 when the method was developed using lead lines.

“In anything other than a millpond, this technique is unreliable at best and the recce swimmers spend more time untangling themselves from the line than measuring depths,” C/Sgt McDonald adds.

A decade ago, the commandos moved into the digital age with the Rapid Beach Profile System - a single beam sonar to measure depths which meant beach reconnaissance could be carried out from a zodiac and without the need for a swimmer. However, it still left huge gaps for potential mishaps. 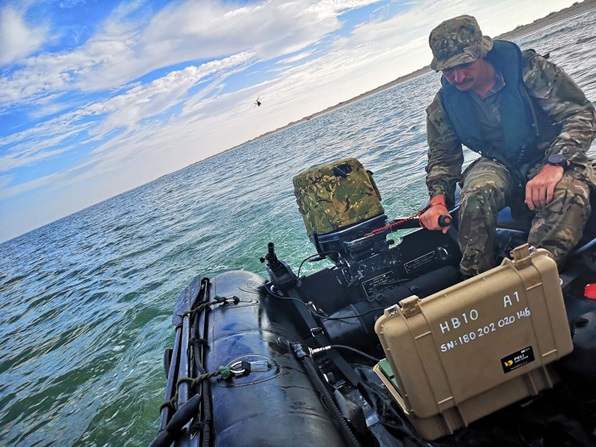 Hummingbird 10 - known in the Corps as simply HB10 - could well plug that gap. HB10 is used in waters three metres deep or shallower; the sonar can ‘see’ about 30 metres either side of a boat.

With a Zodiac moving along at just two knots, the sonar can scan 36,000 square metres of seabed in 40 minutes - eight times the size of the area surveyed with the previous equipment, and with far more comprehensive sonar coverage.

“The great thing about this kit is that you can see the obstacles in real time and therefore don’t waste valuable time on beaches that are unworkable,” C/Sgt McDonald said.

The data gathered was beamed back for analysis, so commanders could select safe lanes into the beach dependent on he height of tide - ensuring the shortest wade for the troops and vehicles.