The first quarter of this year marked a massive deterioration in bulker second-hand asset prices. On average prices fell by almost 25 percent quarter on quarter - in sharp contrast to the relatively minor deterioration in newbuild contract prices. Even so, the second-hand market remains very liquid – MSI recorded 168 bulker sales in the first quarter of this year, the highest total since Q2 2014.

Older ships saw the greatest value destruction, with 15-20 year-old prices dropping by almost 30 percent quarter on quarter, whilst zero-year-old ship values dropped by just under 20 percent quarter on quarter. However younger ships have broken new ground with their current values – in net replacement terms, five-year-old vessels are now worth around 39 percent of the differential between contracting and scrap prices.

Until Q1 this year, the lowest value recorded for this measure of five-year-old ships was 47 percent. Similarly, 10-year-old vessels are worth 18 percent of the differential, compared with a previous low of 22 percent. Chart 4H plots the net replacement value curves for each bulker benchmark in this report against the historical range (capped at 100 percent). 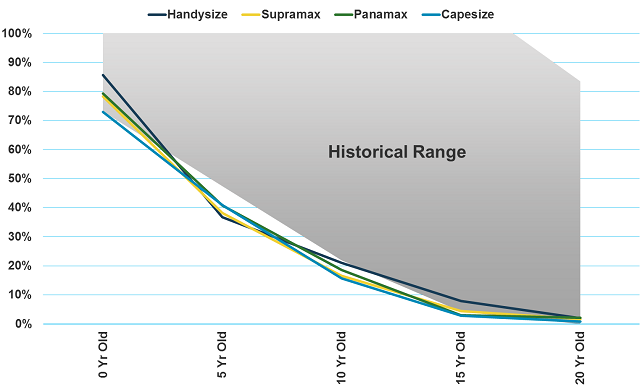 There is little doubt that a significant proportion of sales have been distressed, that is sold in order to prop up company balance sheets and avoid financial collapse. A recent example of this has been Star Bulk Carriers, which has sold nine ships so far this year. Forced sales have resulted in massive destruction in the value of aggregate equity in dry bulk.

Chart 4I plots the development of total sector equity according to a theoretical calculation based on the assumption that each dry bulk vessel is financed at 60 percent LTV at delivery, with a 10-year loan tenor. By year the total outstanding debt is calculated for all bulkers on the water; this is compared to the total fleet value as calculated through MSI’s models. On this basis, equity in the dry bulk sector has been all but extinguished in 2016. 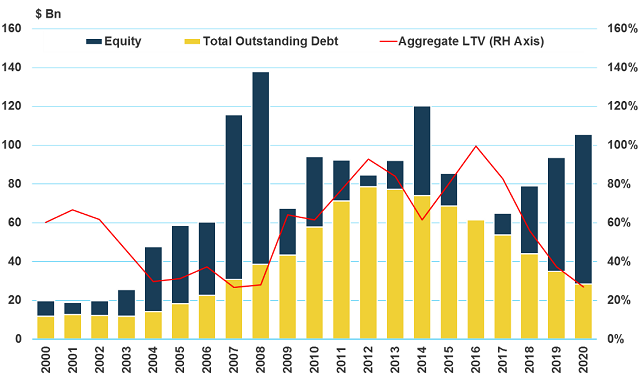 One particularly glaring observation in Chart 4I is the astonishing rate of recovery in aggregate equity over the next five years. This theoretical calculation is essentially underpinned by:
•    A prolonged period of low prices and low contracting resulting in less new debt required.
•    A relatively strong recovery for second-hand asset prices from 2018.

In reality, the actual recovery in dry bulk equity will not be quite so dramatic. The assumption that all debt for every ship is paid off as the vessel reaches 10 years old is not entirely realistic, particularly given how weak earnings have been in relation to debt service costs.

As a result, restructuring of debt will have extended the payment schedule for a number of vessels and the sharp downwards slope of outstanding debt evident in Chart 4I will not be quite so pronounced over the medium term. Of course the need to refinance will have been abated for some vessels/owners through raising new equity, for example by Scorpio bulkers, which would have the opposite effect.

Nevertheless, dry bulk debt requirements peaked in 2012-13 and will fall on the basis of market developments in the interim – i.e. lower prices, fewer orders. Therefore, if the value of dry bulk assets increases as MSI expects from 2018, then the impact on aggregate equity will be effectively leveraged.

MSI expects the industry’s acute cash flow problems will persist. In addition to the scale and longevity of a freight market slump, the cost of finance will play a huge role.

Chart 4B illustrates the scale of this problem via a representative investment in a Capesize vessel in 2013 as analyzed through MSI’s proprietary PD/LGD model. At delivery, we assume a loan of 60 percent loan-to-value (LTV) with a relatively long tenor of 10 years, at LIBOR +3 percent. 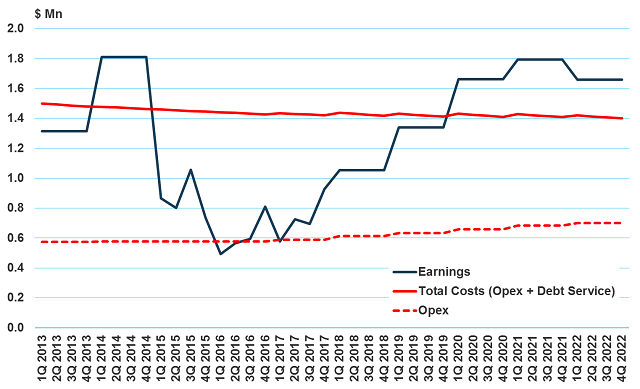 Chart 4B: Cash Flow Illustration of Capesize Investment in 2013

According to MSI’s forecasts, earnings by quarter barely exceed (and indeed sometimes dip below) operating costs for most of 2016/17. However, taking into account finance repayments the picture is far worse: cumulative losses from the project inception to the end of 2019 amount to $9.6 million.

Debt service provisioning is clearly an acute issue and restructuring is dominating the agenda for struggling shipowners and lenders alike.

But whilst changes in the finance/ownership of vessels as a result of restructuring can be dramatic, from the perspective of bulker market balances these vessels are subject only to a change in ownership and often remain in operation.

Theoretically, widespread financial restructuring (such as partial write-offs and repayment holidays) should take some of the pressure off vessel owners, meaning weaker sell-side negotiating pressure and therefore lower timecharter rates, but in fact, this influence is marginal.

The former we anticipate will recover from 2018 – this will be a slow and marginal recovery over the medium-term, mainly due expectations of weaker ordering of new tonnage and also as a result of massive redundant shipyard capacity in China that at times may be reactivated for specific projects (likely under the operational oversight of larger builders).

Meanwhile, we anticipate a recovery in earnings slightly in advance of newbuild prices, from 2017. As outlined earlier, our outlook is for a reasonably strong recovery in timecharter rates from 2018, although this is subject to some significant and very real downside risks. In addition, our expectation of a reasonably strong positive response from prices to better earnings is partly due to expectations that as operating profit margins improve, there will be fewer distressed sales.

Dry bulk vessel values are right now at bargain basement levels but potential buyers must have access to sufficient capital to cover debt service for several years, and a robust constitution to bear the significant downside risks to a market recovery if they are to buy in at this point.