Long haul commercial aircraft provide a basis by which to develop a concept wing-in-ground effect craft powered by flow battery technology and assigned to short-haul travel between coastal airports. Offering in excess of 10,000 deep discharge cycles, the flow battery can be recharged by pumping out exhausted liquid electrolyte and pumping in recharged electrolyte to optimize vehicle availability for service.

Environmentalists have successfully encouraged governments to initiate programs aimed at reducing transportation sector carbon exhaust emissions. The initiatives extend into the maritime and commercial aviation sectors that are exploring alternative forms of propulsion that even include different rechargeable battery technologies. Several groups within the aviation industry have developed battery-electric small airplanes. A vehicle that is a cross between aircraft and sailing vessel travels just above a water surface while held aloft by air dynamics occurring between the wing undersides and the surface below. These are wing-in-ground (W.I.G.) effect vehicles, which are classified as watercraft.

It is theoretically possible to use the performance of commercial aircraft as the basis to determine performance of ground effect craft. The cruising thrust of a jet engine multiplied by flight speed yield a power calculation, while propulsive power varies according to the cube of travel speed. Northern winter air density at sea level is 3.4 times the air density at 35,000 feet, where commercial planes fly. A ground effect vehicle would typically require 25 percent to 40 percent of the propulsive power of the identical weight of airplane flying at the same speed near sea level.

The engines of commercial airliners flying at 490 knots at 35,000 feet produce a cruising thrust that is a fraction of maximum thrust at take-off. It is possible to multiply cruising thrust by cruising speed to obtain a power figure. Slowing the vehicle to minimum flight speed - that is, 25 percent speed of cruising speed or 120 knots - theoretically reduces propulsive power requirement by a factor four-cubed or 64. Resetting the wing flaps to increase low-speed lift would at least double the low-speed power requirement to a factor of 50 percent of 4-cubed.

The Boeing 777 aircraft engine provides a maximum cruising thrust of 18,300-lbf per engine while cruising at 490 knots at 35,000 feet. A ground effect vehicle carrying the same weight liquid electrolyte as fuel would offer 7,900 kWh of propulsive energy. Recalculating for reduced speed, ground effect wings and higher air density translates to minimum propulsive power requirement of 2,400 horsepower at 120 knots. Propeller and electric motor efficiency at 90 percent each would raise power requirement to 2,700 horsepower, allowing for three hours of operation between coastal airports covering a 350 nm distance.

Vanadium based flow batteries such as the technology being developed by Vanadium Corp are capable of delivering over 10,000-deep discharge cycles between 100 percent and 10 percent of charge. The combination of repeated depth-of-discharge, number of usable deep cycles and exchange of liquid electrolyte enhances the attractiveness of flow battery technology. Other research groups are testing liquid electrolyte based on lithium and also on uranium. The main advantage of storing electrical energy in liquid electrolyte is the ability to rapidly pump out nearly exhausted electrolyte and pump in recharged electrolyte, enhancing vehicle availability for service. 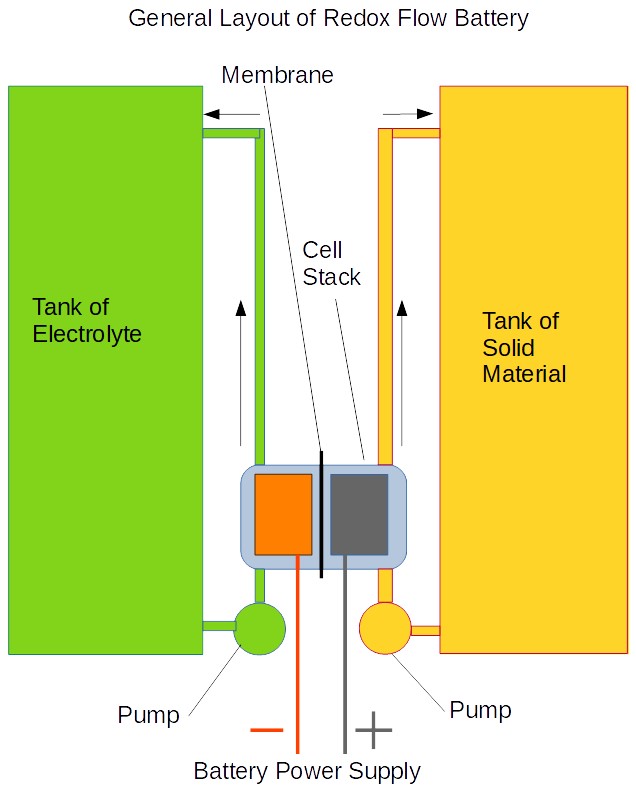 Illustration courtesy of the author

A wing-in-ground (W.I.G.) effect vehicle required to carry a pair of large, electrically insulated tanks would require either twin-hull catamaran or triple-hull configuration. The tandem wing, triple-hull ground effect craft developed in Germany by engineer Gunther Jorg would be suitable for carrying two tanks of liquid electrolyte inside tanks carried in outer hulls with the electrical cell stack and passengers carried in the central hull. The vehicle would be built to 150 feet in length with a possible wingspan of 130 feet, using tandem wings.

Structural stress levels on the tandem wings may require the combination of large tanks in the outer hulls with a pair of smaller insulated tanks carried under either side of the central hull. While single triangular wing design is a possible option, the tandem wind layout lends itself for application involving extended length ground effect craft carrying large tanks of liquid energy material. Using electrical propulsion allows for great flexibility regarding the installation of multiple propellers at strategic locations around the vehicle, with some propellers pushing parallel airstreams under the forward wing.

Advances in solid-oxide fuel cell technology along with advances in hydrogen production make hydrogen – fuel cell propulsion possible for W.I.G. operation. While hydrogen storage tanks may be fitted to the outer hulls of triple-hull tandem wing W.I.G. vehicles, the low density of hydrogen allows for installed in a tank located above the fuselage of a single triangular wing vehicle such as a mega-size version of the Airfish-8 vehicle developed at Singapore. While hydrogen combustion in jet engines produces steam “com-trails” at high altitude and contribute to cloud formation, hydrogen conversion at sea-level merely adds to sea level humidity.

While vehicles powered by flow batteries would undergo an exchange of liquid electrolyte at transportation terminals, hydrogen powered vehicles would merely be refueled. Both technologies provide electric power produced at reduced cost during off-peak hours to transportation vehicles rapidly undergoing an energy recharge during peak operational periods. Locations where coastal airports are adjacent to or within close proximity to maritime terminals would include tanks of recharged liquid electrolyte and hydrogen available for a variety of vehicle technologies. Liquid electrolyte would find propulsive application in ships and in ground effect vehicles.

In the world of commercial transportation, the largest of commercial vehicles travel at very low speeds and offer the lowest transportation cost per container of per ton of bulk cargo. Vehicles become progressively smaller as travel speed and tariff rates increase. Long distance trains are faster that ships while trucks are faster than trains and commercial air freight carries the equivalent of a few truckloads of high-priority freight at very premium tariffs. In passenger travel, ground effect vehicles can offer the travel speeds of high-speed passenger trains where no such service exists.

Flow battery technology is a carbon-free propulsion option for wing-in-ground effect vehicles that provide transportation services between coastal airports. The technology offers over 10,000 deep-cycle discharges with the equivalent of rapid recharging at terminals where tanks of fully recharged electrolyte are available. A travel cruising speed of 140 miles per hour would be competitive between coastal cities located up to 350 nm apart for large vehicles. Further research would be required to optimize the possibility.