In 1849, the Revenue Cutter Lawrence made history as the first Coast Guard crew to sail into Honolulu Harbor, safely escorted in by Native Hawaiians in outrigger canoes. This entry and escort not only exemplifies local customs but also demonstrates the Coast Guard's effort in establishing positive relationships with the communities we serve. For the next 90 years, vessels from the West Coast regularly patrolled the Pacific, and in 1939 the 14th District was created. That commitment improved in 2017 as the 154-foot Fast Response Cutters Oliver Berry (WPC 1124) and Joseph Gerczak (WPC 1126) joined the fleet in Hawaii.

In July, Oliver Berry's crew set a new milestone by deploying over the horizon to the Republic of the Marshall Islands. The 4,400 nautical mile trip marked marking the furthest deployment of an FRC to date for the Coast Guard and is the first deployment of its kind in the Pacific.

"This expeditionary deployment of an FRC more than 2,000 miles forward can be a game-changer for the Coast Guard in how we employ our forces across the broad spectrum of Coast Guard missions," said Capt. Robert Hendrickson, chief of response, Coast Guard 14th District. "We are thinking outside the box on how we bring our capabilities to the very places that need them most. Our new FRC’s ability to respond further offshore into U.S. waters where we have previously been challenged to do so, as well as support our regional partners in their adjacent sovereign waters underscores the relevance of the Coast Guard and the U.S. commitment to our partners and allies in the Central Pacific. I am excited about this new development and look to see this type of expeditionary deployment emulated elsewhere in the Coast Guard."

"This was an exciting and challenging opportunity to demonstrate how the Coast Guard's new Fast Response Cutters can extend multinational fisheries enforcement regimes throughout the Western and Central Pacific," said Lt. Ken Franklin, commanding officer of the Oliver Berry. "My crew performed superbly. I could not be more proud of them, their enthusiasm, and their dedication to ensuring the cutter's safe transit to and from the Marshall Islands. We all greatly enjoyed the opportunity to share the capabilities of our cutter with our partners in the Marshall Island’s government and the general public in Majuro, and are excited about the ability to return to the Marshall Islands."

During the patrol crewmembers from Oliver Berry transferred personnel from the Republic of the Marshall Islands Ship (RMIS), Lomor 03, off Kwajalein Atoll en route to Majuro Atoll, to tour each other's vessels and share experiences and knowledge. Once in Majuro, the Oliver Berry crew volunteered time to paint and clean up a park with local children. They also hosted tours aboard the cutter and visited with the U.S. Ambassador to the Marshall Islands, Karen B. Stewart as they celebrated July 4th. The U.S. presence in Majuro dates back more than three decades. The office of the U.S. Representative opened in Majuro Oct. 21, 1986, demonstrating the U.S. commitment to being a reliable partner and upgraded to an embassy Sept. 6, 1989.

The logistics of an over-the-horizon trip are not without challenges. The crew of the Honolulu-based cutter Walnut (WLB 205) provided Oliver Berry nearly 8,000 gallons of fuel during two at-sea refueling evolutions to facilitate the eight-day transits to and from the Marshall Islands. The Oliver Berry crew was also able to visit the National Wildlife Refuge staff at Johnston Atoll, a U.S. territory, and the personnel in Kwajalein Atoll, one of the largest coral reef atolls in the world. They evaluated the ports for possible FRC support on long-range search and rescue cases, fisheries enforcement missions and as potential ports of refuge during severe weather. 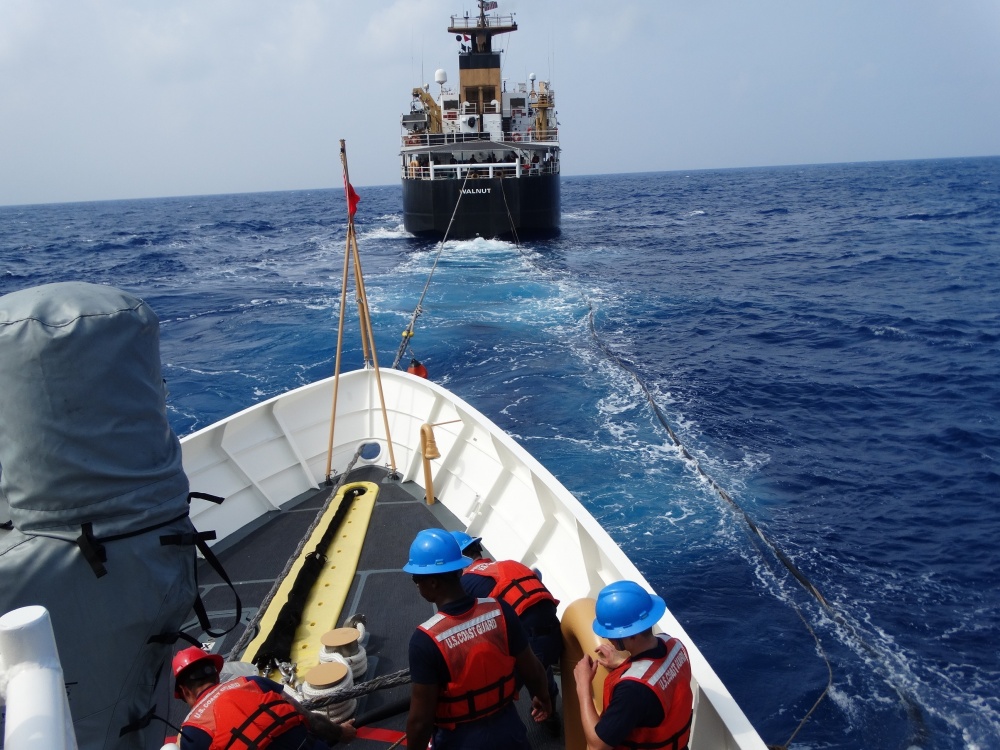 The Berry takes on fuel from the buoy tender Walnut (USCG)

Coast Guard cutter crews visit and work in the exclusive economic zone of partner nations throughout the year to help exercise bilateral agreements protecting sovereignty and resources in the Pacific. The ability of the FRCs to patrol this region increases the number of Coast Guard assets capable of operating in the area. About 66 percent of the world's tuna comes from the Western and Central Pacific according to the National Fisheries Institute, and fisheries are the primary economic driver in the Pacific, especially for small Pacific Island Nations. Illegal, unreported and unregulated fishing results in losses of more than an estimated 21 to 46 percent of catch representing a $1.5 billion revenue loss in the region according to the Marine Resource Assessment Group. This loss can have a direct effect on peace, governance and a continued American presence as transnational crime may supplant traditional fishing to fill voids created by economic declines. This threat is why a robust multilateral enforcement presence is crucial.

The Oliver Berry crew conducted two U.S. domestic fisheries boardings while returning which resulted in five violations, including a $1,000 penalty for unsafe operation or failure to maintain a safe lookout and use radar. FRCs will continue to serve the United States and regional partners to curtail transnational crime, including illegal fishing both at home and aboard.

"The task of sailing a small cutter across the Pacific seems daunting, but our shipmates aboard Walnut and the logistics personnel in Kwajalein and Majuro ensured that our voyage was an outstanding success," said Lt. j.g. Peter Driscoll, executive officer, Oliver Berry. "I thoroughly enjoyed the opportunity to represent the U.S. Coast Guard before an international audience on the 4th of July. As the boarding officer for the two boardings we conducted, I appreciate the excellent teamwork all hands demonstrated to launch the boat and facilitate the boardings. The Coast Guard will continue to work diligently to ensure masters of Hawaii-based U.S.-flagged longline vessels comply with all fisheries and safe navigation regulations."

Remote operations like this patrol are not uncommon in the Coast Guard, but they resonate with our crews who join to make a difference and know they are doing something valuable and different than most Americans as the Coast Guard represents only four percent of the U.S. active-duty and reserve military.

"It was a once-in-a-lifetime experience to represent the Coast Guard and the United States to our partners in the Republic of the Marshall Islands," said Petty Officer 2nd Class Connor Moriarty, an electronics technician and the in port office-of-the-day during the Majuro ship tours. "I enjoyed talking about the ship and its capabilities, and how the ship's radios help ensure constant contact over 2,200 nautical miles of ocean between us and our shoreside command in Honolulu."

Moving forward the work of the Oliver Berry crew proving the over the horizon concept as a viable option to extend Coast Guard and multilateral enforcement throughout the Western and Central Pacific allows for more U.S. presence in the remote reaches of our exclusive economic zones and stronger support to our partners and allies. The William Hart will join the Oliver Berry, and Joseph Gerczak in Honolulu in 2019 and three additional FRCs will arrive in Guam over the next several years. The patrols of these cutters take a significant amount of coordination and pre-planning, but a district-wide and service-wide commitment to that agility and flexibility enables the Coast Guard to continue to be ready, relevant, and responsive in the Pacific region.