There has recently been much discussion on the merits of container-on-barge transportation along the Mississippi River and especially on the southern section between New Orleans and Memphis that is free from navigation locks. It is along the southern section where tugs propel and navigation trains of coupled barge of some 3,500 feet in length. The opening of the enlarged Panama Canal to neo-Panamax ships that carry more than double the number of containers as the earlier Panamax ships, has enhanced prospects for container-on-barge operation along sections of the Mississippi River and could set a precedent for the Saint Lawrence River.

Plans are underway in Eastern Canada to develop two super terminals for mega-size container ships with one terminal to open at Sydney in Nova Scotia and the other on the south side of the Strait of Canso. The voyage between Sydney and Montreal is free from navigation locks while the Strait of Canso is the location of a single oceanic navigation built for Seaway-max size of vessels, requiring assembly of barge trains in the channel on the north side of the lock. Barge trains may also be assembled at the inlet of Sydney.

Several technical precedents in ocean going articulated vessels could be applied to maritime trains that could operate in Eastern Canada. Crowley Maritime has built several ocean going tug barges that carry bulk cargo on the ocean coastal voyages between American ports. Researchers at University of Michigan explored a concept coupled ship where they replaced the tug with a powered ship that was shorter than the barge ahead of it. The concept included a Crowley-style inter-vessel coupling. Marine researcher and consultant Paul Pollinger has patented an articulated ship technology capable of carrying containers. 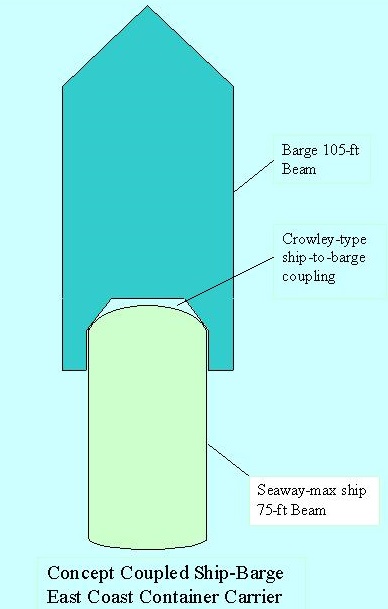 For Eastern Canadian operation, there may be scope to convert a former Panamax ship or a Maersk Pembroke class ship to a barge, rebuilding the stern to include a Crowley style connection. The tug would be a modified Seaway-max container ship that would propel and navigate the larger barge across the Gulf of Saint Lawrence and along the Lower Saint Lawrence River between Sydney and Montreal. After uncoupling the container laden barge at Montreal and courtesy of revised regulations, the tug-ship would proceed upstream to a port on the Upper Saint Lawrence River.

The Government of Canada recently revised some regulations to allow domestic maritime companies to acquire foreign built vessels at a 25 percent tariff to renew their fleets and improve fuel efficiency. A coupled-ship would incur the hydraulic drag of a single vessel and gain fuel efficiency from cargo carried in the addition length that would sail in the hydraulic shadow of the vessel ahead of it. The voyage between Sydney and Montreal would account for 84 percent of the distance between Sydney and a port of the Upper Saint Lawrence River and 71 percent if the distance to Port  of Toronto.

There is also precedent from the Great Lakes of powered ships towing former sail powered vessels as barges, to increase payload. It may be permissible for a Seaway-max ship to use a towing cable to tow a barge or a coupled train of barges across the Gulf of Saint Lawrence into the Lower Saint Lawrence River. Saint Lawrence River Pilotage would need to determine the maximum distance upstream of the mouth of the river along with ships may pull the barges, before tugs couple to the stern of the barges to propel and navigate them further upstream.

The distance between Montreal and small ports on the Upper Saint Lawrence River would be within the operating range of battery powered electric tugs that could undergo partial recharge while tug-barges are stopped in the navigation locks between Montreal and Lake Ontario. While barges of 200-foot length, 35-foot beam and nine foot draft are common along the Mississippi River system, several Canadian operators have sailed barges of 450 foot length, 50 foot width and 16 foot draft that could berth at several ports and docks along the Saint Lawrence River and on both Canadian and American sides of Lake Ontario.

The option of operating coupled vessels from an ocean super port along international inland waterway allows transportation cost reductions through cooperation. Different barges in the same tow would sail inland to ports of different nations, such as a super-size barge to Port of Montreal and the powered ship section to Port of Ogdensburg, New York State. Exempting container-on-barge operation along the Saint Lawrence Seaway from the Jones Act and its Canadian counterpart would allow vessels destined to inland American and Canadian ports to be part of the same tow, at least between Cape Breton and Montreal and perhaps beyond.

The economics of container-on-barge operation involves a large ship being able to tow barge trains between Cape Breton and Montreal. Some barges may be uncoupled along the Lower Saint Lawrence River while tugs would push and navigate other barges upstream of Montreal to small ports located along both sides of the Upper Saint Lawrence River. To increase barge sailing speed along that waterway, a recent development on the Mississippi system involves a hull that redirects the bow wave under the hull to leave a residual bow wave of one to two inches.

Research and evaluations that pertain to container-on-barge operation along the Mississippi River may be applied along the Saint Lawrence River.

To improve container-on-barge economics, ships sailing between Cape Breton and Montreal may tow barge trains across the Gulf of Saint Lawrence and partway along the Lower Saint Lawrence River, perhaps even all the way to Montreal.

Neo-Panamax ships sailing via the Panama Canal deliver containers to the eastern U.S. four days after the combination of trans-Pacific ships and trans-continental trains, but save over $2,000 per container in transportation costs. That present indicates a market for container-on-barge operation along the Saint Lawrence River that could offer savings in transportation costs over truck and railway transport between Cape Breton and inland ports.

A revision of regulations could greatly enhance the economics of container-on-barge along the Saint Lawrence River and Seaway.