Building the Tools to Explore Beneath Arctic Ice

Sitting on a stool in tattered painter’s pants, hiking boots and a green t-shirt, Dr. Jason Gobat looks better suited for an afternoon hike than an Arctic expedition. His blue eyes look larger than life as he peers through the magnification goggles in front of him and down through the smoky plume coming from his solder iron. The salt and pepper stubble on his face serves as a reminder of the days he spent getting everything ready for the project that lays ahead. He snips, cuts and solders his way through the tiny circuit board, trying to get it to work again. Finally. It’s fixed. The $5 electronic kitchen timer he bought springs back to life.

When asked why not just use a watch, or a cell phone? Gobat responds, “This is louder.”

For someone about to toss $750k worth of equipment into the Arctic Ocean, laboring over a cheap kitchen timer may seem petty, but for Gobat, it punctuates the engineering genius and work ethic he’s become known for in the scientific community. For the past 17 years, Gobat has played a critical role in the development of a key research technology, and that expertise landed him a spot on an Arctic expedition to support the Office of Naval Research.

When he began working in 2001 at the Applied Physics Lab at the University of Washington, Seattle, Gobat was introduced to a prototype device under development at the university. Originally created by Dr. Charles Ericksen, Gobat eventually took over the project and has been developing it ever since. The torpedo-looking device is known as a Seaglider™, and its unique, low-energy design means it can spend up to a year in the water gathering scientific data and transmitting it back to scientists at the lab.

“Seagliders are buoyancy-driven autonomous underwater vehicles,” Gobat said. “What makes them unique is they are energy efficient because they don’t have any external moving parts, and they move through the water just by changing their buoyancy. In essence, they are a buoyancy driven float with wings. Instead of sinking like a rock and rising like a balloon, it takes its wings and projects some of that vertical motion into horizontal motion and glides. In order to go forward, it has to go up and down – it’s always going up and down. We use the battery as a movable mass. We can move the battery forward and back on a lead screw. When we want it to go down, the battery slides forward, and when we want it to go up the battery slides back. To turn, we can slide the battery side to side. A little weight on the bottom of the battery causes it to bank and make a turn. We can give the glider a series of waypoints, and a compass inside keeps it on its heading. It will make its own adjustments in order to stay on its course to go where we want to take our measurements.”

By 2010, it was clear Seagliders were a worthy investment for the scientific community, but a desire to use them in the Arctic presented unique problems for Gobat to solve.

The first big obstacle was tackling the reliability of the Seaglider’s electronics and mechanical systems. Since recovery in an Arctic environment is more challenging than in the open ocean, every glider that would enter the water needed to be reliable enough to complete the mission.

“Reliability is a big deal for us,” Gobat said. “We don’t just design something on paper or in the lab that theoretically should work, but we actually have to build it so it does. If the hydraulic pump leaks, it’s dead. If the battery doesn’t move back and forth like it’s supposed to, it’s dead. All the electronics have to work. If the satellite link doesn’t work, it’s dead because it can’t tell us where it is. If any connector leaks, you have problems. It’s the simple stuff, the basic stuff that we’ve been doing for years, but you have to do it right every time or you’re going to have problems. We’ve designed a lot of complex systems, and we have to get them to work and talk with one another reliably every time.”

In the open ocean, the gliders normally rely on GPS to navigate, which requires them to surface to the top of the water to acquire their position. When working under the ice, surfacing isn’t an option, so a new type of navigation was required. Gobat’s solution was to replace GPS with acoustic navigation.

Special moorings placed at varying locations throughout the region emit a series of audible tones that tell the gliders where they’re at under water. 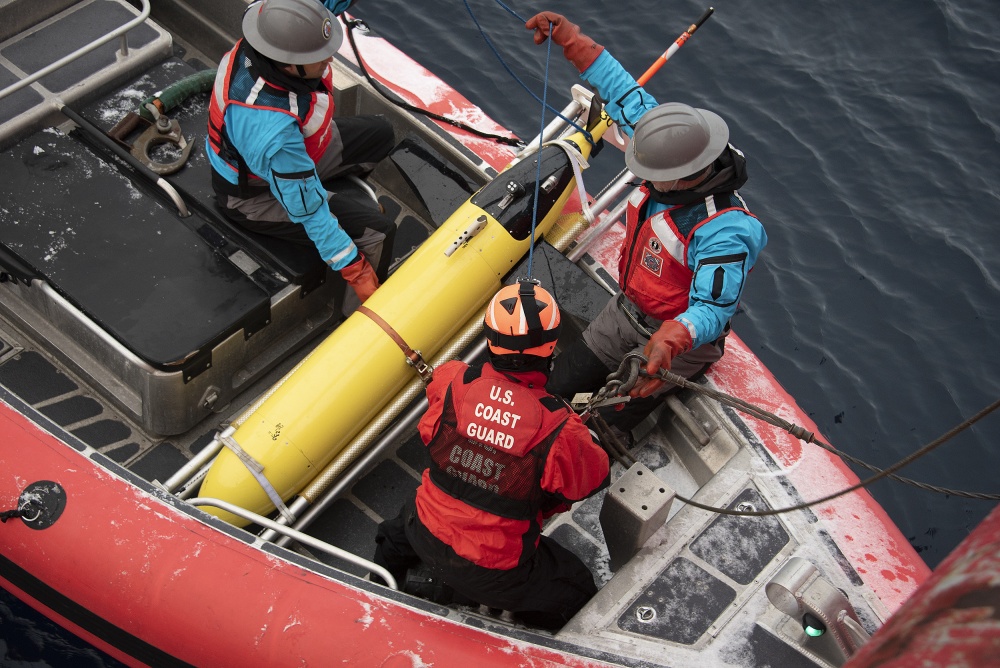 Lastly, Gobat also had to re-write the software that drives the gliders. If there’s a failure, the normal protocol for the glider is to surface to the top of the water and phone home with a description of the issue. Pilots back at the lab in Seattle can then troubleshoot the issue and decide whether or not it can continue collecting data or if it needs to be recovered. However, when working under the ice, resurfacing simply isn’t an option.

“If something goes wrong in the Arctic, we’re pretty dead,” Gobat said. “If a glider is able to find open water and make it to the surface, it will probably get iced in and get smashed, and that’ll be the end of it. So, there is a different set of recovery techniques coded into the glider – it has a different decision tree. We pre-decided what things we think we’re going to just fight through, and with others we know that if it’s broken, it’s broken. If a leak is detected on a sensor, for example, it will try to shut the sensor down instead of coming up to the surface to try to tell us that.”

The strategy paid off. By 2010, three Seagliders were used near Greenland, and in 2014, they were successfully deployed in the Arctic for the first time. Just this past January, another version of the system was deployed off Antarctica to go under the ice shelf, and the team has already begun collecting data.

In September, Gobat and a team of about 30 engineers and scientists deployed aboard the U.S. Coast Guard Cutter Healy in support of a departmental research initiative for the Office of Naval Research. The project, led by friend and colleague Dr. Craig Lee, attempts to better understand how the Arctic ice, atmosphere and water interact. The project, known as stratified ocean dynamics in the Arctic, or SODA for short, relies on the deployment of a series of acoustic navigation buoys and six of Gobat’s Seagliders. Clocking in at about $125k a piece, each glider will spend the next year under the ice collecting and transmitting data back to Lee and other members of the team.

“This is where all our work comes to fruition,” Gobat said. “There is a sense of professional reward there. It’s challenging. It’s stressful. You want the gliders to work. You put a lot of work into them, so you want to see it work out well.”

For now, his formula has been working, and it’s been working well, which is one of the reasons he was chosen to join the SODA team – a decision Lee called a no-brainer.

“The man is a genius,” Lee said. “He’s insane at what he does. He always has a series of side projects going on in the lab. Some of them don’t have any relevance to the project we’re currently working on, but he has this sense to know what we’re going to need five years from now. For a project like this, he’s the guy you send when you can only send one guy.”

After they spend a year in the water, the gliders will eventually be recovered by Gobat or members of his team. By the time analysts finally chew through the mountains of data they collect, Gobat will probably be working on the next version of glider to take the team into the next 10 years.

Seaglider™ is a trademark of the University of Washington, used by the Coast Guard with permission.