Damen Shipyards Group has sold two Azimuth Stern Drive (ASD) Tugs to Ecuador-based DLEN S.A. The vessels will give tug assistance during bunkering operations to Corpetrolsa’s fleet of tankers, a subsidiary of DLEN, as well as other vessels entering the ports of Esmeraldas and La Libertad.

This latest two-vessel order follows hot on the heels of last year’s delivery of three Damen Stan Tugs to the DLEN. In terms of fuel efficiency, power and maneuverability, those three vessels have proven their worth to such an extent that the client returned to Damen with the desire to further expand its fleet of tugs.

The fleet expansion is a reflection on the need to assist the large tankers calling at Ecuador’s petroleum harbors. “These activities require powerful tugs to ensure safe and reliable operations. This is precisely the working environment in which Damen ASDs excel,” says Marnix Brouwer, Damen Sales Manager Latin America. “And therefore the reason that DLEN has purchased these vessels.”

The two new vessels are an ASD 2411 and an ASD 2310, built at Damen’s yards in China and Vietnam respectively. Both vessels were available from stock, and so enabled Damen to offer the shortest delivery times possible.

The ASD 2411 – named ASD Nanda – is already operational in Ecuador after sailing on her own keel from the Netherlands. The ASD 2310 – named ASD Isabella II – will be making her maiden voyage to Ecuador in the coming weeks. The arrival of the Isabella II will mark the moment that the client has increased its tug fleet to six all-Damen tugs.

The delivery of the ASD Nanda and ASD Isabella II is also notable because they are the first newbuild ASD Tugs working in Ecuador. “With the purchase of these modern ASD tugs DLEN is showing its commitment to the maritime development in the country,” concludes Brouwer. 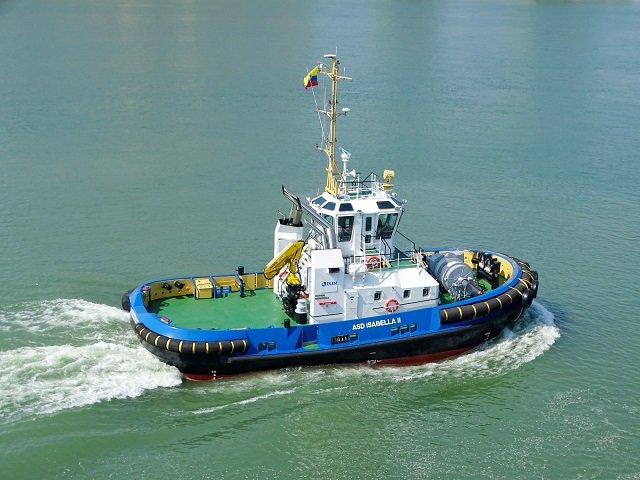