Leading German medical technology company Ottobock is revolutionizing the capacity for manual overhead labor with innovative wearable tech body suit, the Paexo Shoulder exoskeleton, which could provide major benefits when it comes to the Australian shipbuilding and maritime industry.

The upper body exoskeleton, which is now used in 500 plants and factories worldwide, has just launched in the Australian market following its initial release in Europe 18 months ago. There it has been snapped up by leading businesses in maritime industries.

The exoskeleton was designed to relieve muscular stress for workers who specifically spend long periods of time working with their arms raised. When people wearing the Paexo Shoulder raise their arms, pads around the biceps transfer weight to the hips thanks to mechanical cable pull technology.
It provides noticeable relief for the muscles and joints in the shoulder region. This makes it particularly beneficial for people working on ships, boat, yachts and other marine crafts required to do intricate or repetitive tasks overhead. 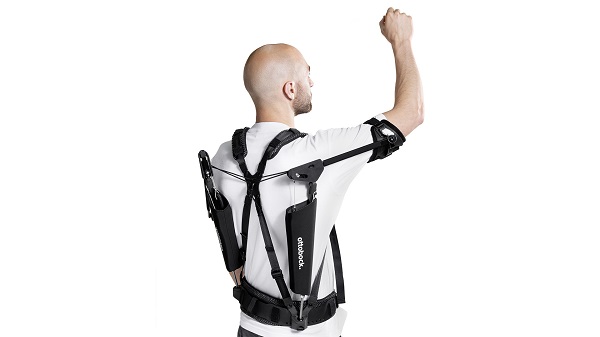 Finnish company Baltic Yachts, based in Jakobstad, Finland, is one of the leading shipyards for large custom-made yachts which now plans to use exoskeletons regularly in production after a successful trial run. The company, which employs around 280 workers, specializes in building high-performance carbon fiber yachts. That makes their sailing and motor yachts especially lightweight, sturdy and fast. Designs, performance and technical innovations are especially tailored to the wishes of customers.

With people now living on average well into their 80s and beyond, and retirement age increasing, the issue for many companies such as Baltic Yachts is how to retain and support staff as their health needs change, particularly those specializing in manual tasks.

A number of ergonomically challenging tasks are performed during yacht building, such as laminating the carbon fibers above head and shoulder height. This strenuous work puts particular strain on the muscles and joints in the arms and shoulders of employees. Baltic Yachts initially tested the Paexo Shoulder exoskeleton with six production employees. The Paexo Shoulder supported the employees, for example when laminating the hull and setting up the oven to harden the carbon fibers, which is built for each hull for this purpose.

The test results were extremely positive. Employees felt considerable relief with the exoskeleton during overhead and above shoulder height work. They were particularly pleased that the Paexo Shoulder is easy to put on, comfortable to wear, and enables complete freedom of movement.

"We expect that using the Paexo Shoulder will improve our productivity and workplace ergonomics,” said Baltic Yachts Head of HR, Kenneth Holmgard. “Initial results show that the employees are extremely happy with the exoskeleton, because relief is immediate and it is very intuitive to use."

Baltic Yachts, which has been in operation for more than 45 years, prides itself on innovation and continually adapting for a changing market. They are continually pushing boundaries when it comes to reinforcement materials such as naturally grown flax hydro-generation, and force feedback steering, retractable propulsion and dynamic stability systems. That drive for innovation is one reason Baltic Yachts was motivated to test the new technology of the Paexo Shoulder exoskeleton.

The Paexo Shoulder does not need an energy supply, so it can be donned within a moment’s notice without the need to power up. Workers wear the Paexo Shoulder close to their body, similar to a backpack. It provides mechanical support for individual body segments in certain postures and movements through the interplay of springs or elastic bands. This type of preventive relief could reduce the risk of work-related musculoskeletal disorders in the shoulder region over the long term.

In Australia these disorders are a common cause for inability to work and are a significant cost for companies and healthcare systems. Safe Work Australia reports 60 percent of all serious claims between 2009-2010 and 2013-2014 were related to musculoskeletal disorders (MSDs) affecting areas such as the joints, vertebrae, muscles and tendons. Some 76 percent of injuries relate to MSDs.

Lotte Koenig, Sales & Business Development Manager Australia, said apart from the shipbuilding and maritime industry, the Paexo Shoulder has great potential to increase productivity and support workers from a very wide variety of industries in Australia such as all aspects of manufacturing including construction, general maintenance and repair industries; automotive and rail; farming and agriculture; food processing; and engineering.

“Paexo Shoulder is especially lightweight – in fact, it is the lightest exoskeleton of its kind, weighing in at less than two kilograms,” said Koenig. “As the design is based on natural human movements, users can walk, sit and also pick up objects with it. The suit can be worn comfortably for an entire shift, or parts of it, while providing noticeable relief for shoulders and arms during overhead work. It also comes in an adjustable one size fits all model, so there’s no need to buy different sizes. This means each company has full flexibility when the exo is needed in different departments.”

Retailing for $6,900, the Paexo Shoulder launched in Germany in 2018 after six years in development with Volkswagen. It is now in international use across many different countries including most countries in Europe, the U.S., Canada, Mexico and India.

The use of exoskeletons in general is expected to become more commonplace in the future in workplaces given high injury rates. Safe Work Australia reports that musculoskeletal disorders are highly prevalent in the Australian population affecting 6.9 million people between 2014-2015 according to the Australian Institute of Health and Welfare. For Australia’s workforce, work-related musculoskeletal disorders (WMSDs) are the leading work health and safety problem, both in frequency and cost which in 2012–13 totalled more than $24 billion.

Given the need for our increasingly ageing workforce to remain healthy and productive, implementation of more effective workplace risk management practices to reduce WMSD risk is increasingly urgent. Whilst musculoskeletal disorders may result from a single event, more commonly they arise from cumulative exposure to one or more hazards over an extended period.

Situated in Duderstadt, south west of Berlin, Ottobock has been responsible for several innovations in prosthetics, including the C-Leg, a computerized knee that adaptively varies its passive resistance to suit the patient's different walking gaits, and the Michelangelo Hand, a fully articulated robotic hand prosthesis. Ottobock has also been a partner to the Paralympic Games since 1988, and an international worldwide partner to the International Paralympic Committee since 2005.

The Ottobock Paexo product range also includes neck and wrist supports. The company will also be launching a much-anticipated back support exoskeleton in 2020.