On November 24, Fedor Ushakov, a new multifunctional icebreaking standby vessel, built to order for Sovcomflot (SCF Group) to service the Sakhalin-2 project, successfully completed her first eastward passage along the Northern Sea Route (NSR). Bound for her permanent operational base on the Sakhalin Island (the Sea of Okhotsk) shelf, the vessel covered a high-latitude route without the assistance of an icebreaker, despite the late stage of the Arctic Ocean navigation season and challenging ice conditions along several route segments.

During this passage, Fedor Ushakov safely covered 2,194 nautical miles (4,063 km) from Cape Zhelaniya (the Novaya Zemlya Archipelago) to Cape Dezhnev at Chukotka, the easternmost point of Russia’s mainland. The vessel covered this distance in eight days nine hours and 58 minutes, moving at an average speed of 10.9 knots (20.2 km/h), which tops the performance of many commercial vessels in ice-free open waters.

During the voyage, Fedor Ushakov exchanged information on the ice situation along the route with the NSR’s management, as well as Atomflot icebreakers, and was provided with all the necessary information and navigational data. During the voyage, the crew was bolstered with the addition of a second master/ice advisor, whose extensive experience in high-latitude navigation was very helpful both during the preparations for and throughout the voyage itself. 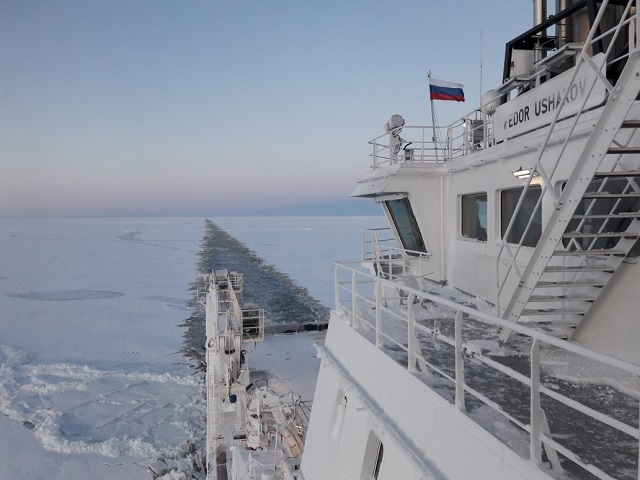 Alexander Kutlubaev, Captain of Fedor Ushakov, commented: “The transit voyage along the NSR proceeded in a regular mode along the entire route. Our vessel demonstrated its superior technical specifications: two Azipod units with a total capacity of 13 MW and an icebreaking hull form provided Fedor Ushakov with great icebreaking capacity and maneuverability. During the voyage, only 50 percent of the engine's maximum power was used, which was certainly beneficial in terms of her environmental impact, whilst adding value to her commercial performance, and made yet another case for using the NSR as compared to the standard, much longer route through the Suez Canal.”

Dmitry Kravchenko, Second Master/Ice Advisor, said: “On a number of voyage segments, Fedor Ushakov braved 50-60cm thick ice fields with a snow cover of up to 20cm and hummock ridges. In terms of the ice situation, the most complicated stretches of the route were the Vilkitsky and Sannikov Straits. In the Sannikov Strait, the vessel came through a frozen one-year ice crust with a compression of up to 3 points and hummocks up to two to three meters high. The information on the ice situation gathered during the course of Fedor Ushakov’s voyage will be used in the planning and implementation of further operations involving SCF vessels along the Northern Sea Route.”

Sovcomflot pioneered the development of commercial navigation along the Northern Sea Route. In 2010, the oil tanker SCF Baltica became the first large-capacity vessel to pass a high-latitude route from the Atlantic to the Pacific Ocean. This voyage proved the possibility and economic feasibility of using the NSR as a transport corridor for large-capacity vessels.

In 2011, the Suezmax-class oil tanker Vladimir Tikhonov completed another trial high-latitude voyage along the Northern Sea Route, delivering gas condensate from Europe to Asia. The tanker’s voyage opened a new deep-water high-latitude route for commercial navigation, running north of the New Siberian Islands archipelago – the so-called Tikhonov Route. At the end of December 2016 and in early January 2017, the Sovcomflot Arctic shuttle tanker Shturman Ovtsyn made an extremely late season westbound transit voyage along the NSR, as part of a convoy led by the nuclear-powered Atomflot icebreaker 50 Let Pobedy.

Fedor Ushakov is the third vessel in a series of four multifunctional ice-breaking supply and standby vessels, built under a long-term agreement between Sovcomflot and Sakhalin Energy. The supply vessel Gennadiy Nevelskoy became part of the SCF fleet in the spring of 2017, followed by the standby vessel Stepan Makarov in the summer of 2017. Fedor Ushakov’s naming ceremony took place on 11 October 2017. All the vessels of the series will operate under the Russian flag and will be crewed by Russian seafarers, with St. Petersburg as their home port.

In terms of her specifications, Fedor Ushakov and other vessels in the vessels are among the best in their class, combining high maneuverability, a powerful propulsion system, and environmental friendliness, and a large passenger capacity (during an evacuation, the vessel can hold up to 150 people). The vessel is capable of sailing through ice of up to 1.5m thick, with a snow cover of up to 20cm thick, at a steady speed of three knots.

Fedor Ushakov’s design and her equipment enable the year-round delivery of supplies and consumables for personnel on offshore oil platforms, as well as providing standby support and rapid emergency response capabilities. The availability of such vessels within the Russian fleet significantly increases the safety of the marine environment in Russia’s Far East region.