In partnership with The Greatest GENERATIONS Foundation, Cunard will again pay tribute to the forgotten heroes of World War II, honoring U.S. veterans with a unique enrichment program on board a Queen Mary 2 Transatlantic Crossing that will travel from New York to London on July 20-27, 2018.

On this seven-night voyage, guests will have the opportunity to attend lectures and interact with several WWII veterans, hearing first-hand about their experiences during America’s involvement in the war. From the “Battle of the Atlantic,” to the conflicts in Normandy and Pearl Harbor, these distinguished war heroes will engage in discussions and Q&A’s, giving guests a very personal glimpse into the human elements of wartime service.

“Last year our guests were spellbound by the veterans' moving personal accounts of their wartime service, resulting in standing ovations every day,” said Josh Leibowitz, senior vice president, Cunard North America. “Cunard prides itself on offering one-of-a-kind, world class entertainment and enrichment programs, and we are honored to welcome back The Greatest Generations Foundation on the July 20th Transatlantic Crossing." 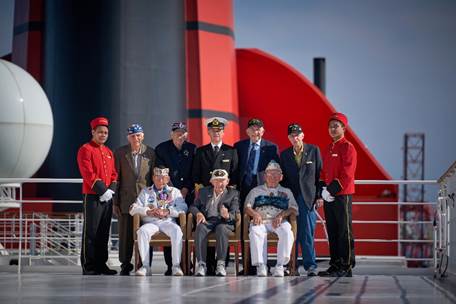 World War II veterans scheduled to be on board will include:

•   Steve Melnikoff, who experienced the full horrors of Normandy when he served in 1st Battalion, 175th Regiment of the 29th Infantry Division and who earned three Bronze Stars and two Purple Hearts for his service.

•   Jack Holder, Flight Engineer for the United States Navy who flew missions all over the Pacific theater including fighting in the Battle of Midway, and who witnessed Japanese Commanding General Yamamoto’s plane shot down.

•   Harold Angle, who served as First Sergeant E-5 in the 112th Infantry Regiment, 28th Infantry Division, and who marched down the Champs-Elysées on August 29, 1944 in the Liberation of Paris.

•   Michael Ganitch, who served as a Senior Chief Quartermaster in the United States Navy and witnessed Pearl Harbor.

•   James Blane, Corporal of the 4th Marine Division of the United States Marine Corps and served in the battles of Kwajalein (Roi-Namur), Saipan, Tinian, and Iwo Jima.

•   Peter DuPre, who served as a medic in the 114th General Hospital Unit in Kidderminster, England during WWII, where he treated wounded servicemen from all areas of Europe, including those who had been wounded during the Battle of the Bulge.

•   John Foy, who served in the 87th Infantry Division joining General George Patton’s Third Army in liberating Europe. John served as a front-line machine gunner in the Battle of Northern France and later the Battle of the Bulge

•   Kenneth Barclay, who served as Lieutenant Colonel O-5 in the “Fighting 69th” Regiment, where he served in Hawaii, Saipan and Okinawa during the war.

Q&A’s and other discussions with the World War II veterans will cover topics including:

Jeremy Hubbard, current co-anchor of FOX31 Denver News will join the voyage and act as a moderator of the panels and lectures. Prior to joining the FOX31 Denver News team, Hubbard, a native of western Colorado, worked as a New York-based correspondent for ABC News where he contributed and reported for all ABC News broadcasts including: Good Morning America, World News with Dianne Sawyer and Nightline.

The Auckland District Court has sentenced Ports of Auckland Limited (POAL) to a fine of $280,000 for allowing its pilot boats to exceed harbor speed limits on thousands of voyages, including one that ended in a high-speed collision with a swimmer.  The director of national regulator Maritime NZ, Keith Manch, said POAL has also agreed to pay $220,000 to the family of the swimmer, Leslie Gelberger. Gelberger was struck and killed by the pilot boat Wakatere on April 20, 2017,...

The UK government is imposing a new 14-day self-quarantine requirement for passengers arriving from France and the Netherlands, citing a spike in daily coronavirus case counts on the other side of the Channel. However, the decision has drawn criticism from the British Ports Association, which argues that it will have a negative effect on ferry operators. "This is extremely disappointing news and while we fully understand the difficult situation the government is in, this is very sudden and will cause...

The Florida Ports Council released an economic analysis of COVID-19’s impacts on Florida seaports as it called for government aid to assist the state’s ports. Citing data from maritime research company Martin Associates, the council pointed out that in addition to the impact from the loss of the cruise industry ports across the state were also experiencing decreases in liquid bulk, dry bulk, and containerized cargo. The council estimates that almost $23 billion in economic activity is being lost across...