Completing her maiden voyage, the Damen Multi-role Aviation Training Vessel (MATV) MV Sycamore arrived in Sydney harbour early on Monday morning. The 94-metre long vessel is now less than a month away from deployment as a versatile multi-role vessel and helicopter training platform for the Royal Australian Navy.

“It is definitely an impressive sight to see the Sycamore enter Sydney harbour,” states Damen Sales Director Asia Pacific Roland Briene. “The MATV project really highlights what can be achieved with this joint team effort. We have accomplished the on-time and on-budget construction of a complex vessel that will provide an efficient, functional and comfortable training platform for the Royal Australian Navy.”

The MV Sycamore is a special purpose ship that has been designed and constructed to combine both commercial and military characteristics. Although the vessel will be commercially operated, she will integrate numerous strategic features. These include, for example, a helicopter deck with associated training facilities, dedicated aviation operational spaces, multifunctional mission deck and workshops as installed on the latest Royal Australian Navy ships – all meeting SOLAS Regulations.

Not limited to helicopter-related operations, the MATV will also enable the Royal Australian Navy to carry out navigation and air traffic control training, officer familiarisation, target towing, torpedo and mine recovery operations, and dive and unmanned aerial vehicle support.

The 14-day maiden voyage has brought some relevant points to light, Mr Briene goes on to say. “So far the MV Sycamore has proved to be very fuel efficient, with a range exceeding the contracted requirements. What’s more, she has encountered some rough weather, causing significant movement, which she handled very well.”

“Achieving this milestone has involved close collaboration with all parties; the Commonwealth of Australia’s MATV project team, Serco’s defence engineering team, who have overseen the design and verification process, Lloyd’s Register, as well as the Damen project and production team.”

The official handover of the MV Sycamore is scheduled for 28 July 2017. 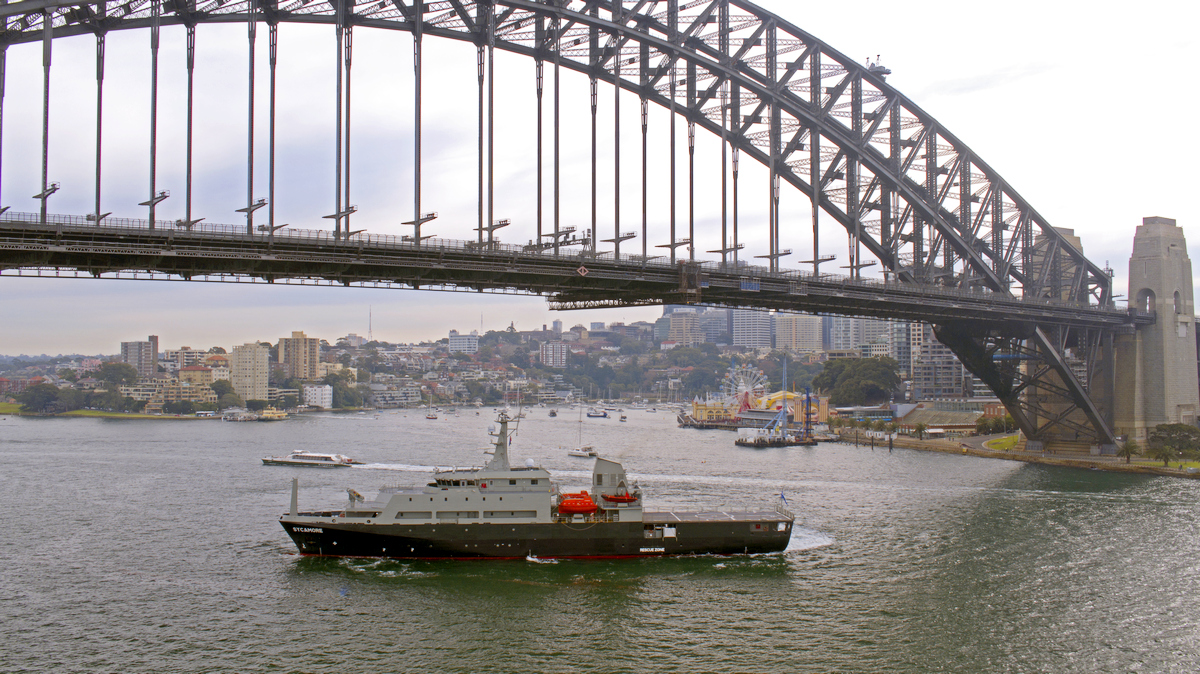