The news coming out of the People’s Congress, that concluded last week in Beijing, sent mixed signals to the international market. Some people focus on the news that Li Keqiang, China’s Prime Minister, publicly acknowledged the economy was in a bad shape and lowered the economic growth target to 7%. Others point to more upbeat news that China will add measures in the coming months to re-energize the languishing economy. The latter news may be a silver lining to the beleaguered shipping industry as China’s reinvigorated economy and investment, alongside swelling appetite for raw material and commodities, may save the industry that was in dire straits due to overcapacity and lackluster demand – the robust economic expansion in China has fueled sustained growth of the industry during the past decade. People with such a belief will make a costly mistake.

First of all, the 7% target is not the floor of the economic growth rate. This is a significant change from 2013 when provincial governments scrambled to report economic growth figures far exceeding the official growth target, due to China’s unique official evaluation and promotion system. In his first report to People’s Congress as China’s Prime Minister in 2014, Mr. Li Keqiang made it explicit that the target, then at 7.5%, should not be viewed as the minimum growth rate and the central government was ready to tolerate slower growth to give way to other issues such as environmental protection, social justice, and economic reform. Indeed, the 2014 economic growth rate came slightly lower than the official target at 7.4%, signifying the government’s willingness to taper off the behavior to “beat” the official growth target. That China created 13 million urban new employments in the past year, despite moderate economic growth, further alleviates the need to overemphasize faster GDP growth.

Second, a full-blown stimulus package, that will invariably give rise to out-sized demand for raw material such as iron ore or copper, will be the last resort to boosting China’s economic growth. During the past few years, policymakers in China have resisted the temptation to revert to the much-maligned approach of relying primarily on investment to develop the economy. The last investment-led stimulus plan, worth 4 trillion RMB in the wake of the global recession in 2009, led to the current economic dilemma. Instead, policymakers will test a variety of tools, including interest cuts, reduction of deposits made by banks to the central bank, and fiscal policies that will benefit a few sectors deemed strategic, to cultivate an economy that strikes a healthy balance between investment and consumption. The government is also likely to invest heavily in improving air quality, which has garnered much public discontent. China will not splash new money into infrastructure and real estate investment that would only generate marginal returns unless it exhausts other alternatives.

Last but not least, China has limited firepower to turbocharge the export. Although RMB, the Chinese currency, has slid against the U.S. dollar for about five percent since last November, it appreciated against other currencies of major trading partners, because those currencies, including the Euro and Yen, dropped more precipitously (see Chart 1 for example). For example, the Euro has plummeted against the U.S. dollar since four months ago, on the way to reach parity with U.S. dollar by 2017, according to Goldman Sachs. The appreciation of RMB exacerbates the competitiveness of China’s export that was already mired by wage increases at home. The weak export will generate less demand for Chinese goods going abroad, and subdued corporate profits will in turn level off investment at the domestic market. 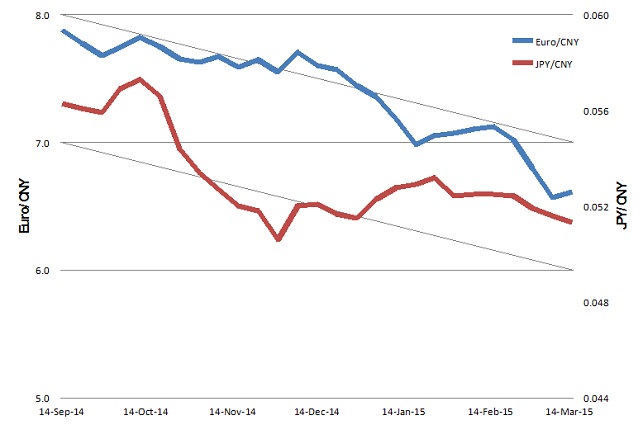 There is no easy way out for the shipping industry,which has been wandering in a dire strait since the great recession, and China certainly won’t come to the rescue this time. As the commodity super cycle finally comes to a pause, it is time for the industry to readjust its expectations and align with the new norm, not to wish the future would repeat the good old days.