The Sad Tale of the Amsterdam's Demise

During my holiday trip in the South of England I visited the Shipwreck Museum at Hasting, an independent charitable Museum set in the historic Old Town of Hastings.

The Museum has artifacts from many ships wrecked in the English Channel from the Goodwin Sands in Kent to Pevensey Bay in East Sussex including the Amsterdam, a Dutch East Indiaman of 1749.

The story of the Amsterdam begins in the city of Amsterdam in 1748 when she was built in the shipyard of the Dutch East India Company (the Verenigde Oost-Indische Compagnie). Her Captain, Willem Klump, was a man of 33 who lived with his wife Margareta and infant daughter Elysabet, and baby son Coenraad, in a tall narrow fronted house overlooking the tree-lined Prinsengracht.

This was not his first voyage to the East Indies, so he knew the usual dangers that could be faced during the nine month outward bound voyage. Although the main components of the ship’s cargo were over two tonnes of silver bullion, she also carried a mixed cargo that included many bottles of wine and masses of fine cloth.

So, when she sailed out on her maiden voyage to Java, in November 1748, Captain Klump was in charge of 333 people, sailors, gunners, garrison soldiers and also five Company passengers, three of them were women. They had boarded the ship at Texel at the northern entrance to the Zuider Zee but soon found that her voyage was delayed by westerly winds. She eventually departed from the Dutch coast on January 8, 1749.

The wreck of the Amsterdam is the most notable feature of the beach at Bulverhythe, the tops of its ribs being exposed in the sands and the peaty clay of the prehistoric forest. This large vessel was run ashore in a severe gale on Sunday January 26, 1749. Fifty of her crew of 333 had died of plague, traditionally said to be yellow fever, since the ship left the Netherlands on the first stage of her intended maiden trading voyage to Java, via the Cape. Forty more people were sick and dying, as she was beached at high tide, their misery being compounded by the ship having lost her rudder in Pevensey Bay.

The crew seems to have mutinied, since shooting certainly occurred, and they broke into the cargo of wine and many became drunk. The crew clambered down the sides of the ship at low tide that night and were taken to safety in Hastings. Local smugglers quickly raided the ship and took some of the silver bars from the 2.5 tonnes of bullion that the Amsterdam was carrying, and, after the rest of the bullion was removed, the town crier tried to recover the missing bars from the inhabitants of Hastings.

Fighting broke out between local people trying to raid the ship, and one man was shot on the beach. The Hastings coroner decided that it was not his responsibility to investigate the matter, as he considered that the man had died “at sea.” In just a few months the Amsterdam sank about eight meters into the beach, so that nowadays the remains of her decks are buried with much of her cargo, supplies and personal possessions still intact. The bow of the ship lies towards the shore, and the seaward end the wreck is surrounded by steel sheet piling put there in the 1980’s to aid archaeological excavations by a combined Dutch and British team.

The Amsterdam is of global importance since she is two-thirds complete, the most intact East Indiaman of any country known in the world, and it was the East India Companies of Europe, particularly Dutch and the English, that opened up global trade in the 17th and 18th centuries, by using East Indiamen. 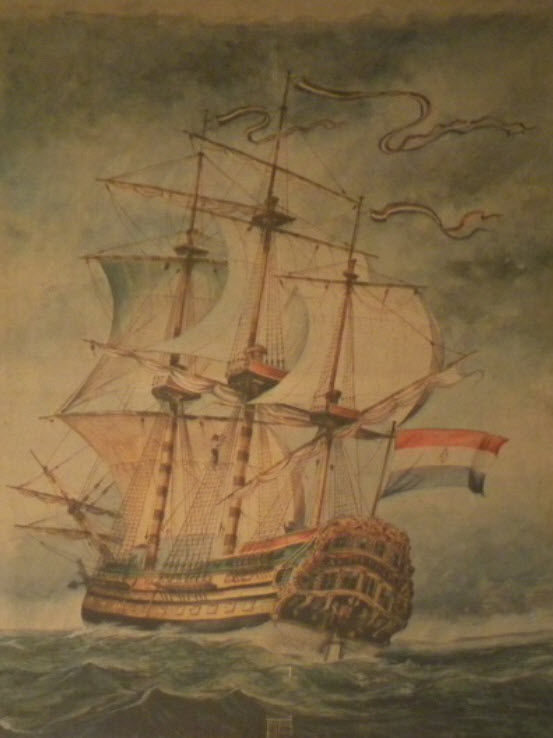