Finding Life and Farming Minerals Deep Under the Sea

Japanese researchers have access to the largest scientific vessel ever constructed, one that has a 120 metre tall derrick capable of drilling to 7500 metres below the seafloor. They’re using it to hunt for life deep under the seafloor and explore for mineral deposits at the bottom of the ocean — topics that are of great interest to Norwegian researchers.

When the Japan Agency for Marine-Earth Science and Technology, JAMSTEC, and the Japanese government decided to build the largest-ever research vessel in the world, they called on the Japanese people to help name the ship.

The overwhelming suggestion was “Chikyu,” the Japanese word for “Earth” — a fitting name for a $600 million vessel that was designed to examine the innermost secrets of the planet and the mysteries found deep below the surface of the sea.

In its nearly 12 years of operation, Chikyu has explored the mechanisms behind the earthquakes that regularly rattle Japan, plucked methane hydrates from the ocean’s bottom and drilled some of the deepest holes ever into the Earth’s crust.

Among the many exciting findings coming from Chikyu and JAMSTEC was the news from a thin layer of coal found 2.5 km below the ocean’s floor, where JAMSTEC researchers found life that had been buried for 20 million years.

And in a series of expeditions to study black smokers, the deep hydrothermal vents that spew mineral rich water onto the ocean’s bottom, researchers discovered that the holes they drilled as part of their research actually caused new hydrothermal vents to form, raising the intriguing possibility of farming minerals in the sea.

Both of these areas are of great interest to NTNU and SINTEF researchers who have also been exploring ancient bacteria associated with petroleum reservoirs, as well as mapping marine minerals on the bottom of the sea.

In July 2012, the Chikyu set out for a seismically active area off northeastern Japan where scientists hoped to find a new microbial ecosystem deep below the ocean floor.

The research cruise, IODP Expedition 337, was part of what was then called the Integrated Ocean Drilling Program, or IODP, an international marine research collaboration involving 26 nations. It was designed to help fill the gaps of what is known about life under the ocean’s bottom, said Shin’ichi Kuramoto, Director General for the Center for Deep Earth Exploration at JAMSTEC. 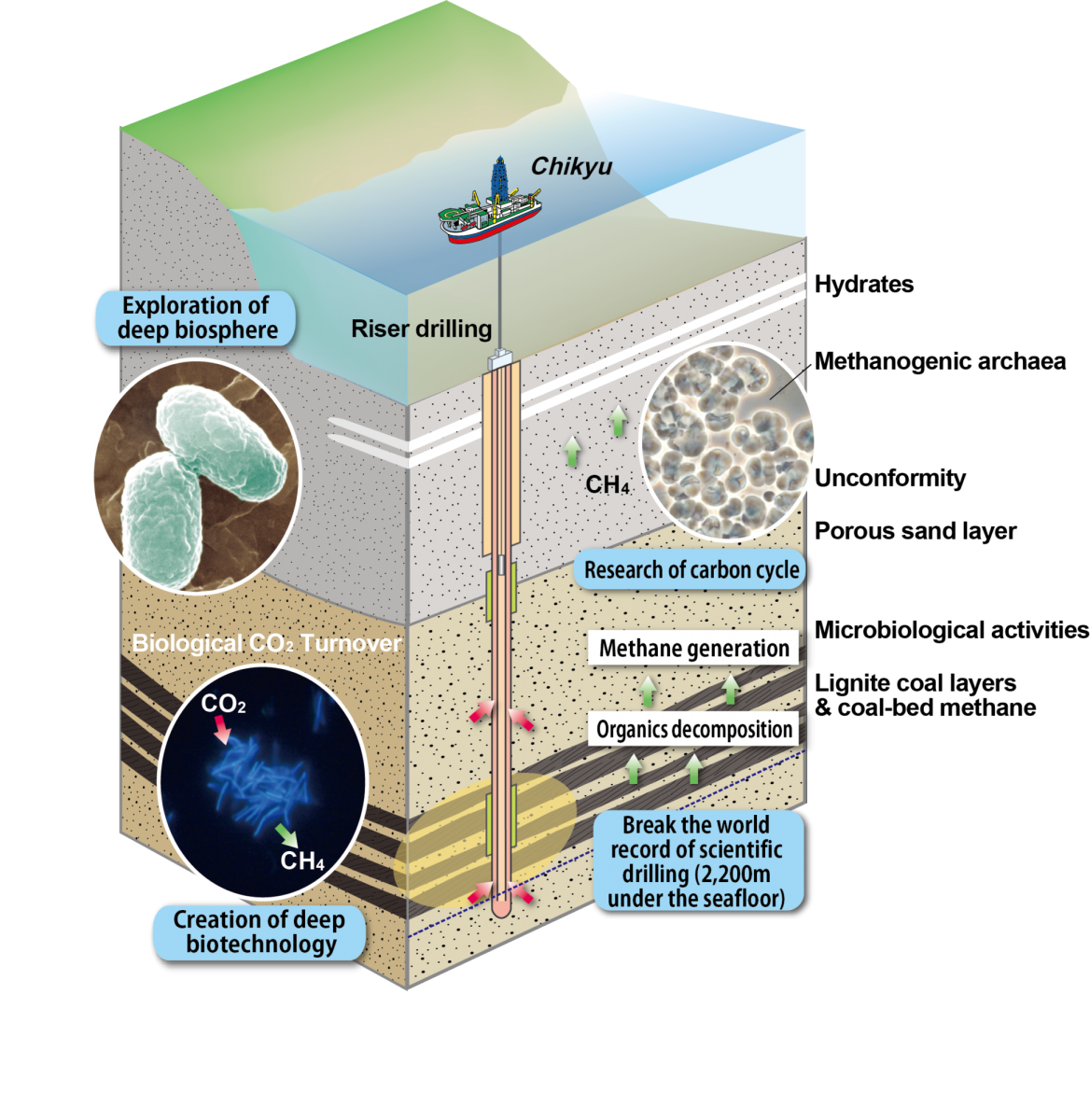 “Thirty years ago, most people didn’t understand that there are so many microorganisms under the sea,” he said. Even though much has been learned over the past few decades, “there is still a lot we don’t know.”

What was known about the area was that it had a deeply buried coal bed in a natural gas field. The coal had formed over the course of 20 million years, created from coastal wetlands that sank into the ocean and then were buried by marine sediments.

The answer came after 68 days in the field and subsequent laboratory research, with results published in Science magazine in July, 2015. Not only were there living microbes in the coal bed, the researchers found, but “these organisms are making methane,” Kuramoto said.

The researchers found that they could encourage the microbes to make methane in the laboratory by feeding them with pulverized coal. That presents a possible opportunity, Kuramoto said, although the possibility lies far in the future. “We could pump CO2 into the microorganisms, and they could make methane gas,” he said, which could then be used for energy production.

Here’s a video of the cruise where researchers were able to extract samples from the coal bed:

Alexander Wentzel is a SINTEF researcher who has worked with deep subsurface microbes, along with his colleague Anna Lewin, a former postdoc at NTNU, and retired NTNU researcher Svein Valla. He says microbes like the ones found by the JAMSTEC researchers are extremely interesting as possible biocatalysts. A biocatalyst is a biological substance that could be added to a chemical reaction to make it proceed more rapidly.

“If you have a good biocatalyst, it can help with many different things, such as biomass conversion, or possibly as an enzyme that could be used in CO2 capture,” Wentzel said. Another possible application could be for Bio-EOR, or biologically activated Enhanced Oil Recovery, which is something that could be of interest to companies like Statoil.

One of the specific advantages of deep subsurface microbes is that they are already adapted to high pressures and temperatures, because those are the actual conditions that they live in. But as the JAMSTEC researchers discovered, it is both incredibly difficult to actually acquire the microbial specimens, and even more challenging to get them to grow in the laboratory.

“We think (the microbes) could be in a dormant state, which would explain why it is so hard to cultivate them,” Wentzel said.

Wentzel’s own research is limited by the ability to acquire samples, since he and his colleagues rely on oil companies to give them access to drill holes and to take samples from the deep reservoirs. Still, it’s an area that fascinates him, because it is so unknown and offers the potential to discover new microbes that have commercial value.

“There is still a lot to explore,” Wentzel said.

Minerals under the sea

Another area where JAMSTEC’s research is interesting to NTNU researchers is in deep-sea minerals.

And one company, Nautilus Minerals, is actually developing a copper-gold mining project called Solwara 1 in the territorial waters of Papua New Guinea.

Due to its long coastline, Norway manages one of the largest maritime zones in the world. The Norwegian continental shelf has already provided wealth to the Norwegian economy in the form of oil and gas. Some researchers think deep-sea mining could be a natural next step for Norway, particularly as the world moves away from fossil fuels.

“We have an industry that is used to working offshore,” said Steinar Løve Ellefmo, an associate professor in NTNU’s Department of Geoscience and Petroleum. Ellefmo is also one of the principle investigators on MarMine, a project funded by the Research Council of Norway and industry to explore exploitation technologies for marine minerals on the extended Norwegian continental shelf.

Last autumn, Ellefmo and colleagues spent three weeks in the Arctic waters between Jan Mayen and Svalbard, collecting minerals sample and information using both remotely operated and autonomous underwater vehicles. The University of Bergen, among others, has mapped geological formations along the Mid-Atlantic Ridge in this area that may be very rich in copper, zinc, gold and silver.

Although Ellefmo says it’s not clear that Norway will come to mine these deposits, society will nevertheless need additional mineral deposits in the years to come.

“One of the drivers here is your and my need for minerals — for electric cars, for computers, for mobile phones,” he said. “Everyone wants to shift to renewable energy, but you will need huge amounts of minerals to do this, and they have to come from somewhere.”

Grow your own mineral garden

While MarMine and other efforts have mapped the location of potential mineral rich deposits, JAMSTEC has inadvertently gone one step further, Kuramoto said.

They drilled four boreholes as part of their sampling efforts during the expedition. When they returned two years later, they were stunned to find artificial chimneys in the places where they had bored the holes. The researchers called these artificial chimneys “infant chimneys,” even though one of them grew to a size of 15 metres in just 25 months.

But what made the infant chimneys so interesting was that they were chock full of minerals, particularly copper, lead and zinc. The researchers published their findings in Scientific Reports in early 2016.

Kuramoto says the find raises some interesting questions: could researchers some day in the future drill holes of different depths or sizes that would allow them to control the kinds of minerals that are deposited outside of the chimneys?

“We wonder if in the future we can control the flow rate and the temperature (of the fluid coming out of the chimney), which would mean we could choose the mineral,” he said. “So if we wanted gold, we would need this temperature, or if we needed copper, we would need that temperature.”

Essentially, if the idea actually could work, scientists could “grow” the minerals they needed. But not anytime soon, Kuramoto says.