A Tale of the New M/V Atlantis

It’s a special celebration when a new ship is launched! Even if the girl was already sailing, when she finds a new owner – and a new future – it’s good cause to break open the champagne.

And I don’t only mean the champagne for the christening ceremony.

Cassen Eils invited the maritime community to join in for a lively party at Boots- und Schiffswerft Cuxhaven, i.e. the Boat and Ship Dock Cuxhaven, commonly known as BSC. Both companies, which is to say BSC the shipyard and Cassen Eils the ferry company, are our greatly valued clients. For this reason, clearly, it was a particular point of pride for us to attend and play our part - in other words, enjoy the libations and the Butterkuchen (butter cake).

The shipping trade is ancient, dating back almost 3,000 years; it has its traditions. Nothing gets done in this business without respecting the appropriate motions and pageantry. Part of the special joy in practicing maritime law is to be in a position to tap into that sense of continuity. It’s extra exciting when you see students you’ve taught commercial law to at the Academy now joining crews at events like this. Being recognized as their former lecturer, being able to touch base again and say hello to old faces, is a huge delight all on its own. (Note: the new captain wasn't a student; he missed us by one year, but there were other faces.)

Every ship needs a captain, but Maximillian Schröder only had three stripes on his uniform. That all changed on April 5, 2018. With the launch of the new ship, Cassen Eils was able to offer a promotion. Maximillian Schröder received his father’s (yes, his father's!) captain’s stripes – for the record, if you think those are tears, they’re not, Maxi just had something stuck in his eye.

The same applied to me, of course...

It was quite an industrial feat to get the new MV Atlantis ready for the tourist season. Both Cassen Eils and BSC worked to tight deadlines, and the crew and the workers from the dock worked hard to ensure that the new gal would be ready to go for the beautiful, sunny spring weather – that included a new paint job, the right funnel colors, other livery, various retrofits, interior work, general engine and other maintenance and cleanup. After all that, the M/V Atlantis will tour the harbor and go on short expedition cruises, e.g. to Brunsbüttel or to view nearby brackwater flats that are popular mating grounds for sea lions. 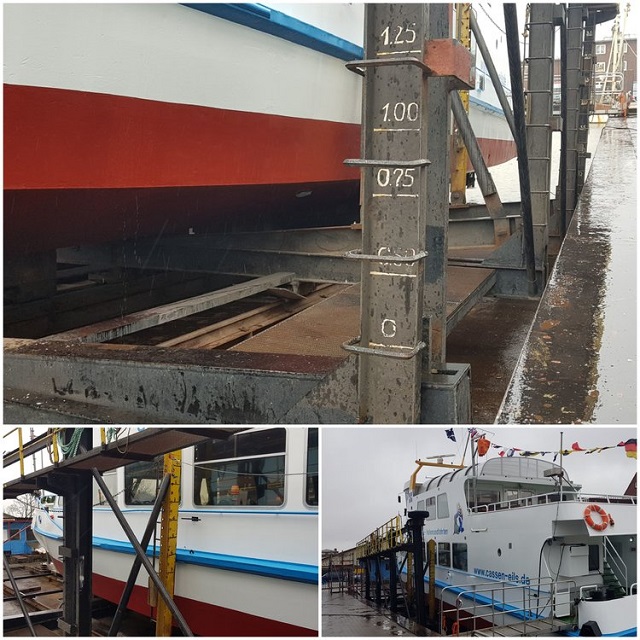 The christening was performed by the first female first officer in the Cassen Eils fleet, Samatha-Jill Hay. She did a great job, and the bottle burst open perfectly with lively force. 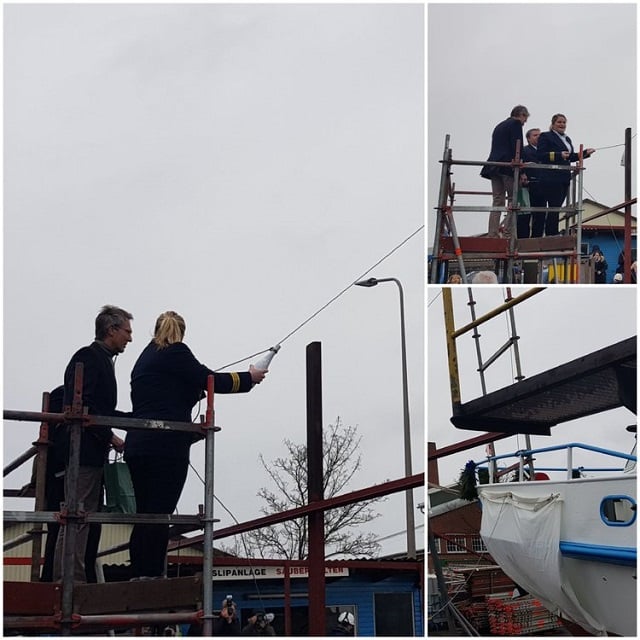 The sheet is there to protect the expensive paint job from the champagne, of course.

BSC’s slipway provided the backdrop for the immediately following float out. And, as expected – although there is always a hint of tension – everybody performed their jobs with consummate professionalism and the M/V Atlantis was launched quayside with no issues.

Following a brief engine test, now-Captain Schröder docked her along the pier and let the eager spectators board. Not bad for a first act as captain, if I may say so.

The highlight of the ship’s interior was the “convertible” canopy, which can be rolled forward in order to create an open-air sundeck. This versatility is essential in Northern Germany’s rough climate, where it could begin raining at any moment without warning.

We’re ready for adventures on the M/V Atlantis and are sure she’ll have a great career. All that hard work by Cassen Eils and BSC,  and good seamanship, will surely be rewarded.