The fate of the aging FSO Safer off the west coast of Yemen caught in the politics of the war-torn region was thrust back into the headlines after a Yemeni minister issued a new Tweet saying the vessel has developed an oil leak. Long described as a “time bomb,” the Tweet set off a flood of messages on social media predicting the long-feared environmental disaster while others are dismissing the posting as more political posturing. 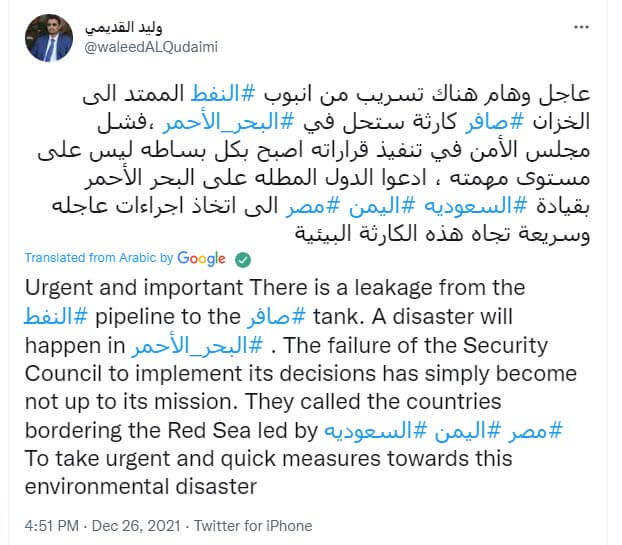 The First Undersecretary of Hodeidah Governorate in Yemen, Walid Al-Qadimi, posted a message on his Twitter account saying that the FSO was leaking oil at the connection to the pipeline from shore. He said the urgent disaster was the fault of the United Nations Security Council who he accused of inaction. The deputy governor called for an immediate response of neighboring countries including Saudi Arabia and Egypt to prevent the leak from becoming a full-scale environmental disaster.

Built in 1976, the oil tanker was converted in the early 1980s to become a floating storage unit to service a newly discovered oil field in what was then the Arab Republic of Yemen. In the late 1980s, it was prosperous operating off the Yemeni coast, north of the port city of Hodeidah. As the civil war heated up the operations became more difficult and since 2015 the FSO has been maintained only by a skeleton crew. They have been able to avert potential problems, but the owners warned that they no longer had the resources to properly maintain the vessel and to handle a serious leak if one occurred.

Among the maintenance issues identified in a series of reports, they said the vessel has not been properly vented in years. The vessel is believed to be holding approximately 1.1 million barrels of oil. It is in a contested area controlled by the Houthis. Reports suggest that waters in the area have been mined.

#??????_??????_???? #???? … So far no real evidence about the leak in #Safer moreover, the pipe has been disconnected since almost 2 years from the tanker. follow up is onging .. #Safer_FSO @GreenpeaceAR @detoxconflict @UltareConsult @wammezz @Greenpeace

Both sides in the long-running dispute have used the vessel for what officials have called “political blackmail.” Yemen’s Foreign Minister Ahmed Award bin Mubarak renewed the dispute recently accusing the rebels of holding the vessel hostage. At the same time, Yemen’s Minister of Water and the Environment said the leadership of the Houthi militia should be treated as environmental criminals.

The UN so far has not responded to the latest accusations, saying repeatedly in the past that it was seeking a path to proceed but that the Houthis were not committed and changed their positions. Over a year ago, the UN reported it had an agreement to inspect the tanker but later said the rebels refused to ensure the security of the team and were demanding that the inspection and repairs be completed in a single visit. After months of back and forth, the deal collapsed.

Among the responses to the minister’s message was an undated image showing oil leaking from the pipeline connection. Another source posted a map showing the broad area that they said would be polluted by the leak.

An independent NGO, however, responded saying that it had seen no firm evidence of a new leak. They contend that the pipeline in question was disconnected from the FSO nearly two years ago. However, everyone agrees the danger is real and that action is required to reduce the threat from the aging vessel.