Yara Birkeland, which is being billed as the world’s first electric, autonomous container vessel, was officially christened and entered service today in Norway after nearly six months of testing and trials along with the outfitting of its systems. The vessel begins a two-year trial period to become certified during which it is anticipated that it will gradually transition into autonomous navigation and operations.

The christening took place on the wharf in Brevik, Norway attended by approximately 800 guests. There were speeches by His Royal Highness Crown Prince Haakon Magnus of Norway and Norway’s Minister of Petroleum and Energy Terje Aasland. During a lighter moment during the christening by two 12-year-old young Norwegians to represent the future, it took three swings to shatter an ice-shaped bottle against the hull.

The concept for the vessel began in 2017 with the goal of building a vessel that could demonstrate carbon-free operations. The construction order was placed in 2018 with the Vard shipyard in Brattvåg, and after delays during construction, the vessel was delivered in late 2020. After outfitting of its systems, Yara Birkeland arrived in its homeport of Brevik, near Yara’s Porsgrunn plant that manufacturers fertilizer, in November 2021 and in December made a demonstration voyage for a preview in Oslo. 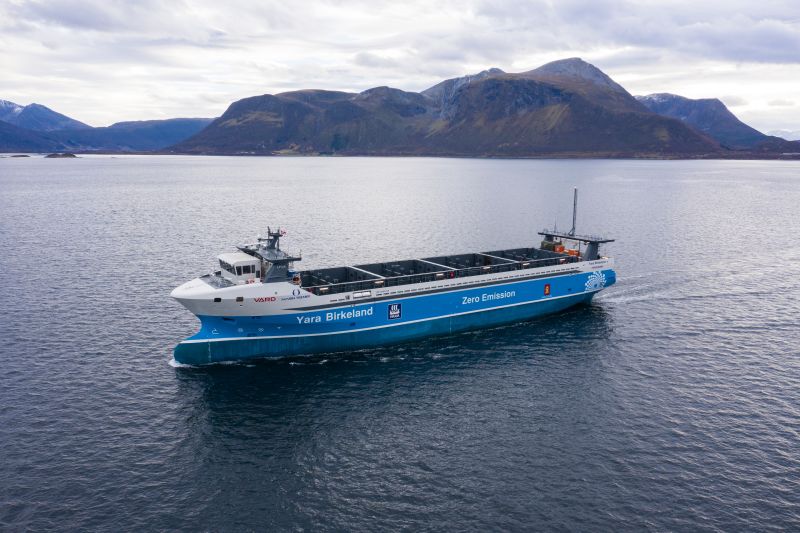 Construction of the vessel was completed in November 2020 (Vard)

"It takes courage to create something new. It requires investment, patience, and an ability to not give up after the first try. Innovation requires trial and error - and trial and error again - until you succeed,” said Crown Prince Haakon Magnus during the christening ceremony. During a tour of the vessel, the Crown Princess said he had been following the development of the vessel since he first saw a model of the ship calling it a key moment in the development of future green technologies.

While the Chinese reported that they put a similar vessel into service earlier this month, Yara takes credit for launching the concept five years ago developing the battery-powered ship in collaboration with several Norwegian companies as partners. The overall project is being overseen by Massterly, a joint venture undertaken by Wilhelmsen and Kongsberg, which has operational responsibility for Yara Birkeland. Kongsberg Maritime was responsible for the development and delivery of Yara Birkeland’s technology, which includes sensors and the integration required for remote control and autonomous operations, as well as electric propulsion, battery, and control systems. Operations of the vessel will be monitored and eventually transitioned to a center in Horten, Norway.

Captain Thomas Fevang who is in command of the ship during the first phase of the trials explained the ship is equipped with cameras, inside and out, including a night vision camera, and with the radar, the AI systems onboard detect, identify, and reacts to the obstacles. 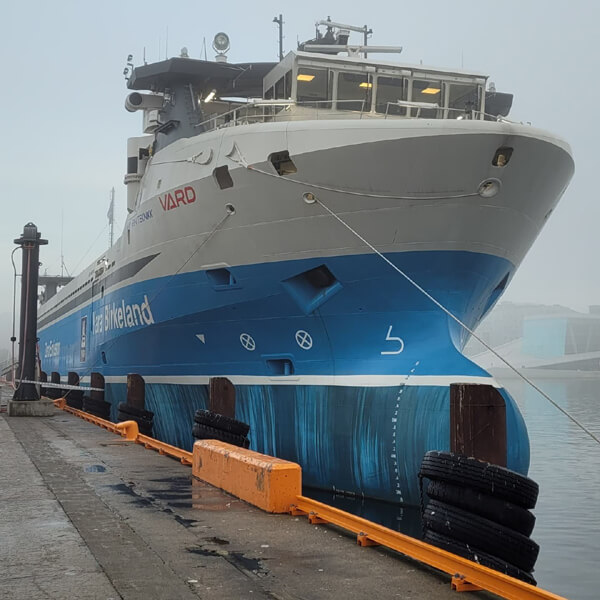 Now that the containership has entered service it will be traveling on a route approximately seven nautical miles transporting fertilizer from the Yara factory to the port of Brevik for domestic and international shipment. The ship replaces upwards of 40,000 diesel truck trips per year.

During the first year of operation, the vessel will operate with a full crew while undergoing further testing of its systems and equipment. The plan is for the ship to gradually take on more responsibility and by the end of the trial, it will be fully autonomous both for its navigation and the loading and unloading of 120 containers of fertilizer.

Yara Birkeland, which measures 262 feet in length and is 3,200 dwt, is powered by 20 batteries with a capacity of 6.8 MWh. Propulsion is provided by two Azipull 900 kW pods along with two 700 kW side thrusters providing an operating speed of 6 to 7 knots.

The development of Yara Birkeland, which is named for Kristian Birkeland a Norwegian scientist who developed the process of using nitrogen to make fertilizer, was supported by the Norwegian government. Enova SF, owned by the Ministry of Climate and Environment, provided approximately $14 million to support the project.