Chinese officials are reporting that they have put the world’s first autonomous, electric container feeder ship into commercial service after a period of extensive trials. The vessel, which was developed through a broad collaboration of Chinese institutions is reported to be a demonstration ship that will provide significant learning for the future development of the technology.

The vessel, named Zhi Fei (Chinese for Flying Wisdom) commenced its first regular voyage on April 22. The Zhi Fei is reported to be approximately 8,000 dwt with a capacity of 300 TEU. The vessel is 384 feet long with a beam of 57 feet and a depth of approximately 32 feet. Propulsion is reported to be by a DC electric system that gives the feeder ship a top speed of approximately 12 knots and a normal operating speed of 8 knots. The Zhi Fei was built by the Qingdao Shipyard.

The design for the vessel was led by Bestway in cooperation with Shanghai Jiahao Ship Design Institute and the Dalian Maritime University. The initial construction contract was signed at the end of 2019 with work beginning in May 2020. The vessel was launched in April 2021 with the first sea trials in June and testing on the systems began last September. The technical evaluation was completed in March 2022, and the vessel is now operating between Qingdao Port in Shandong Province and Dongjiakou managed by Navigation Brilliance (BRINAV). 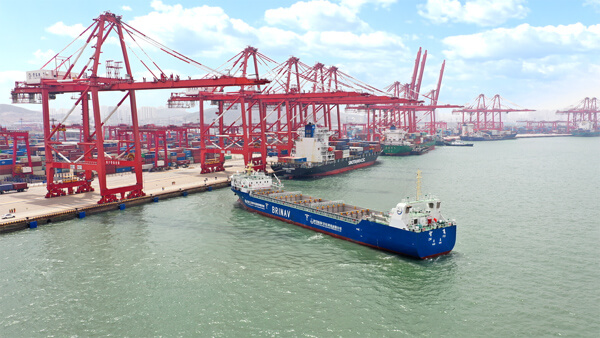 According to the reports, the ship adopts a full-rotation electric propulsion system based on hybrid technology and integrates large-capacity battery packs and generator sets through DC networking to achieve intelligent energy efficiency optimization. The Chinese are saying that it is the first time that a DC power system has been combined with intelligent operations.

Information developed from this project and the operation of the ship are contributing to efforts to build similar self-propelled containerships with a larger capacity from 500 to 800 TEU.