WTO Warns of Slowing Trade Growth Due to Disruptions

The World Trade Organization is warning that its indicators are pointing to a slowing of trade growth due to disruptions in critical sectors of the global economy.

The trade group with membership from most of the world’s producing nations is highlighting a sharp decline in its “Goods Trade Barometer” after a strong rebound that started in the summer of 2020 following the decline at the onset of the pandemic. The WTO reports its indicator fell more than 10 points between August and October 2021 closing the period just slightly below the baseline value for the index, indicating a return to a current position in line with recent trends.

“Recent supply shocks, including port gridlock arising from surging import demand in the first half of the year and disrupted production of widely traded goods such as automobiles and semiconductors, have contributed to the barometer's decline,” the WTO writes in its release of the indicator. “Following its sharp rebound from the initial shock of the COVID-19 pandemic, global merchandise trade is slowing, with production and supply disruptions in critical sectors dampening growth alongside cooling import demand.” 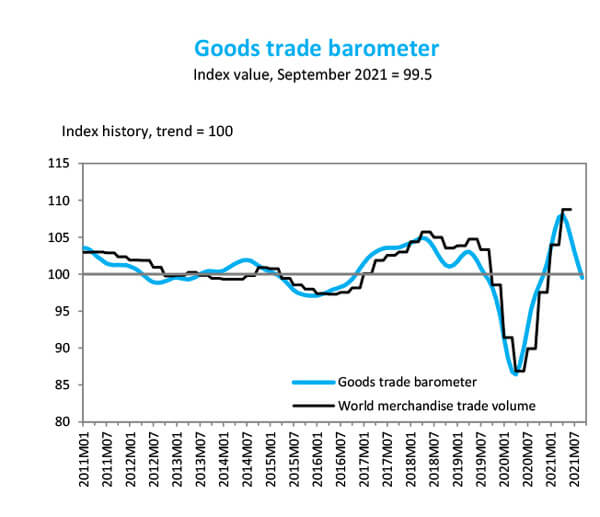 The trade group’s analysis also says that it now appears that demand for traded goods is also easing, as illustrated by falling export orders, which further weighed down the barometer. They, however, noted, that cooling import demand could help ease port congestion, but they predicted that backlogs and delays are unlikely to be eliminated as long as container throughput remains at or near record levels.

The Goods Trade Barometer is a composite leading indicator providing real-time information on the trajectory of merchandise trade relative to recent trends, according to the WTO. The latest barometer reading came in at 99.5 which follows the record reading of 110.4 in the previous barometer issued in August, which now appears to be a peak for the indicator.

All the barometer's component indices were declining in the latest period, reflecting a broad loss of momentum in the global goods trade. The steepest decline was seen in the automotive products index (85.9), which dropped below trend as a shortage of semiconductors hampered vehicle production worldwide. This shortage was also reflected in the electronic components index (99.6), which fell from above trend to on trend.

Indices for container shipping (100.3) and raw materials (100.0) also returned to near their recent trends. Only the air freight index (106.1) remained firmly above trend as shippers sought substitutes for ocean transport.

At the beginning of October, the WTO revised its overall trade forecast calling for global merchandise trade volume growth of 10.8 percent in 2021 — up from the 8.0 percent forecast in March. They however noted that trade growth was slowing in the second half of 2021 prompting them to forecast growth of 4.7 percent for 2022.