The wreck of the container feeder Kea Trader continues to degrade at Durand Reef, New Caledonia, 11 months after it went aground. According to high commissioner Thierry Lataste, the bow section of the wreck is now listing 18 degrees to starboard, complicating salvors' efforts to board it and prepare for its removal, even under normal weather conditions.

For now, the government says that the salvage work will be mostly confined to the removal of debris scattered on the reef and the prevention of pollution. In the interim, the government and the salvage team are revising their plans in response to the shifting of the wreckage. Cyclone Hola, a category 3 tropical cyclone that passed through Vanuatu, New Caledonia and New Zealand in March, accelerated the deterioration of the wreckage, forcing the response management team to re-evaluate their approach. Another episode of bad weather from May 25 to 27 caused strong swells at Durand Reef, leading to the bow section's new list to starboard.

Despite the many challenges created by the wreck's deterioration, the restoration of the reef to its natural state is still the goal of the salvage operation, according to Lataste. 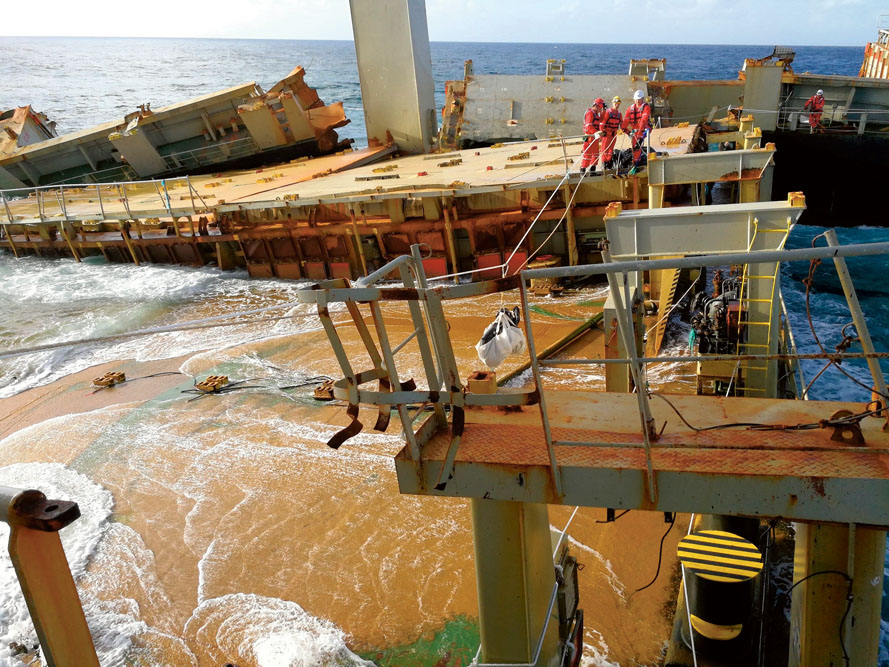 Salvors aboard the Kea Trader, May 2018 (image courtesy FANC)

Salvors with Ardent received the first response contract after the Trader went aground in July 2017. They lightered off most of the stricken vessel's oily wastes, fuel and containers. However, the hull broke in two due to wave action in November, complicating the response effort. Cyclones Gita and Hola caused the fore and aft sections of the hull to shift, collide and break up further, with subsequent release of pollutants and loss of cargo. Holds 2 and 3 were both breached, and Hold 3 has "disintegrated," according to shipowner Lomar Shipping.

Lomar has contracted with Shanghai Salvage (SSC) for the final removal of the Kea Trader's wreckage from the reef. The Chinese state-owned salvage company has proposed a method to "secure" the wreck's pieces and take them to China for final dismantling. The SSC crane ship Ju Li arrived in Noumea last month to stage for the removal process.