At almost 100 meters high, weighing over 11,000 tons and with a diameter of 26 meters, the turret will ensure Shell’s Prelude floating liquefied natural gas (FLNG) facility can operate safely in the most extreme weather conditions.

The FLNG will be stationed in the Prelude gas field off the northwest coast of Australia. It will be Shell’s first FLNG deployment. The technology allows for the production, liquefaction, storage and transfer of LNG at sea, as well as the ability to process and export liquefied petroleum gas (LPG) and condensate.

Prelude will be located in the Browse Basin, approximately 475km north-northeast of Broome and over 200 km from the nearest point on the coast of the remote Kimberley region, in Western Australia. The FLNG is anticipated to stay moored at location for 25 years and is expected to produce 3.6 million tons per annum (mtpa) of LNG, 1.3 mtpa of condensate and 0.4 mtpa of LPG for export.

The Prelude FLNG facility will be 488m long and 74m wide, weighing more than 600,000 tons fully ballasted - roughly six times as much as the largest aircraft carrier. Some 260,000 tons of that weight will consist of steel - around five times more than was used to build the Sydney Harbour Bridge.

The FLNG, under construction at the Geoje yard in South Korea, now has its topside modules installed. Three modules are at the heart of the FLNG process. They house the two large refrigerant compressors, the main cryogenic heat exchanger and the three cryogenic
pre-coolers.

The commissioning and start-up team have commenced site acceptance testing for phase 1 of the control and safeguarding system. This phase will see the distributed control system that controls most of the early systems to be commissioned available for use. Initially it will be used for loop checking the 23,000 instruments on the FLNG to prove the instruments have been correctly installed and configured.

Prelude is operated by Shell in partnership with Inpex (17.5 percent), KOGAS (10 percent) and OPIC (five percent).

Drydocks World built the Prelude turret for SBM Offshore, Technip and Shell. The company is one of the few worldwide specialists capable of delivering such large-scale projects.

The project exemplifies the global nature of the offshore industry, with designs completed in Monaco, construction in Dubai, the modules shipped to South Korea, and for use off Australia.

Image of FLNG courtesy of Shell 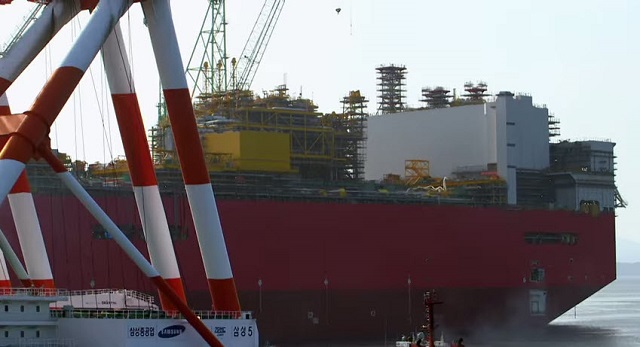