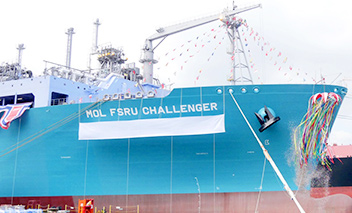 The FSRU has an LNG storage capacity of 263,000 cubic meters and is the first one that MOL will independently build, own and operate. It will provide storage and regasification services to a project in Turkey after delivery in October. Operation is slated to commence within 2017.

MOL says it is also moving into the LNG secondary transport and LNG fuel supply business in Asia and Central and South America where it anticipates rising demand for LNG. MOL will promote the FSRU business as one of world's largest LNG carrier operators and the only Japanese FSRU owner and operator.

Earlier this month, MOL announced its decision to participate in an FSRU project in India. The company signed agreements with Swan LNG Private for the long-term operation of an FSRU and an FSRU in Gujarat. MOL will invest in Swan LNG and participate in many facets of the project as technical partner. The terminal is slated to start operation in early 2020.

This will be India's first newbuilding FSRU project and will have a capacity of 180,000 cubic meters.