One of only a few large, fast passenger ferries fueled by natural gas is due to enter service tomorrow sailing between Spain and the Balearic Islands. In addition to being an LNG-fueled vessel, Balearia’s new vessel, the Eleanor Roosevelt, expands the company’s capacity and becomes the longest fast ferry. It is also the first LNG-fueled fast ferry with reciprocating engines.

Construction of the Eleanor Roosevelt began at the end of 2018 at Spain’s Astilleros Armon Gijon shipyard. The vessel, which has a length of just over 400 feet, is an Incat Crowther designed RoPax catamaran fitted with Wartsila dual-fuel main engines. The vessel will have a service speed of 35 knots and a maximum speed of over 40 knots.

The vessel incorporates several technological advancements as well as increased comforts for its passengers. By fitting the vessel with two LNG tanks, it has a range of up to 400 nautical miles without refueling. The range is further extended to 1,900 nautical miles in dual-fuel (LNG/diesel) mode. The route between Denia, Spain and Ibiza is approximately 125 miles with an average crossing time of three hours. 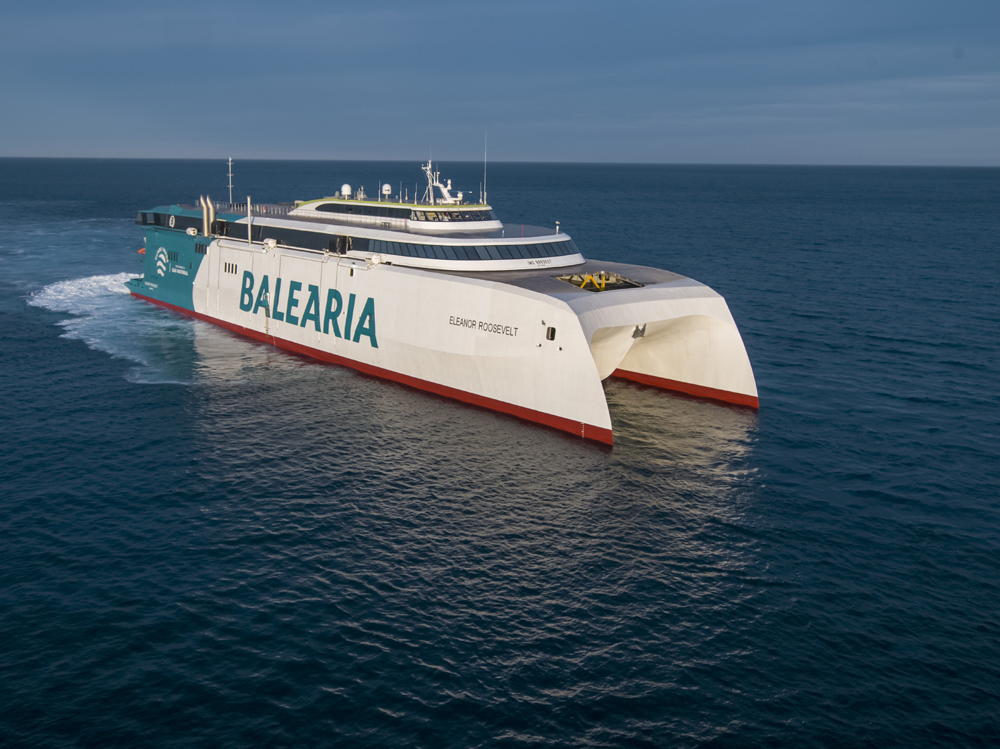 Balearia has been growing its fleet of LNG-fueled vessels as part of its commitment to the environment. The Eleanor Roosevelt becomes the line’s seventh vessel running on natural gas. The company is also converting an existing vessel to use dual-fuel and plans to build an additional LNG-fueled vessel as part of an overall investment of over $450 million to incorporate LNG into its operations.

Balearia reports that in 2020 the LNG vessels helped it to reduce emissions by 37,000 tons of CO2. They estimated that annually the reduced carbon dioxide emissions from the Eleanor Roosevelt will be equivalent to removing more than 8,900 conventional passenger cars from the roads. The actual fuel consumption and engine efficiency will be monitored by onboard measuring equipment and sensors as part of a project co-financed by the European Commission's CEF.

"We want to promote the Balearic Islands, a destination we have always been involved with and to whose citizens we are firmly committed, by bringing our most revolutionary, green, and smart ship", said Adolfo Utor, president of Balearia. He also pointed out that the larger size of the vessel will permit the company to increase by 60 percent capacity on the route and double the number of reserved seats available for passengers.

Passengers will enjoy enhanced amenities including several cafeterias, as well as a food truck on deck and a children's area. Digital access and entertainment are also provided during the voyage.

Costing more than $100 million to build, the new catamaran features high-tech innovations that considerably reduce movement, vibrations, and noise, and the interior spaces are spacious and bright for a comfortable crossing. It has a total passenger capacity of 1,200. The garage has 500 linear meters for trucks and 250 cars or a maximum capacity of 450 vehicles.