The auction for the leases making up the New York Bight concluded after 64 rounds of bidding becoming the nation’s highest-grossing competitive offshore energy lease sale in history with the winning bids totaling $4.37 billion. The Department of the Interior, highlighting that the bids exceeded even the highest total for offshore oil and gas leases, called the results of the three-day auction a milestone in the development of the offshore wind energy industry and a key step toward achieving the Biden administration’s goal of 30 GW of offshore wind energy by 2030.

The results of the auction have left even the most ardent followers of the industry and analysts stunned. In a statement to Bloomberg shortly after the close of the auction this afternoon, Heather Zichal, who heads the American Clean Power Association said the results “blew expectations out of the water.”

The winning bids were more than eight times the record set per acre in the U.S.’s last auction in December 2018. In that auction, BOEM received $405 million for three tracks off Massachusetts that three years later are well underway toward becoming large offshore wind farms.

Bidding for the six leases in the New York Bight representing over 488,000 acres began Wednesday morning and concluded Friday afternoon just after 2:00 p.m. It was both the largest lease auction to date for the United States and the first conducted by the Biden administration as part of its ambitious plan to accelerate the deployment of offshore wind resources. 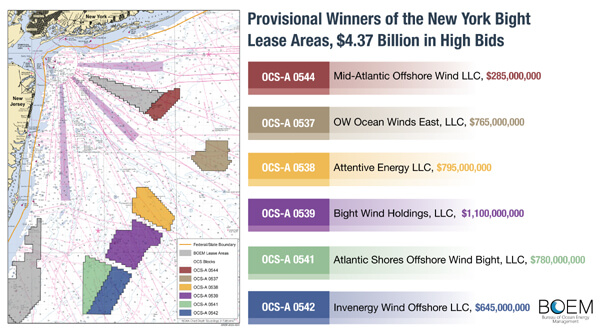 BOEM published the list of provision winners showing bids ranging from $285 million for the smallest parcel at the northern end of the area to an astonishing $1.1 billion for the largest lease area of approximately 125,000 acres located off the New Jersey coast. Other winning bids ranged from $645 million to $765 million, $780 million, and $795 million. The price per acre ranged between $6,619 to $10,696 with an average of $8,951. Experts point to the closeness to major cities as well as New York and New Jersey’s commitment to the wind industry as factors contributing to the record bids.

“The record-shattering interest in the New York Bight lease sale is testament to how bright the American offshore wind outlook is and how confident developers are in the strength of the U.S. offshore wind industry as a whole," said Erik Milito, President of the National Ocean Industries Association. He called the auction results a watershed moment in the development of the industry.

The list of provisional winners identifies the companies by the official bidding entity, which in most cases are partnerships. The $1.1 billion bid came from Bight Wind Holdings, a joint venture between RWE Renewables and National Grid. RWE said in announcing its record setting bid that the lease holds the potential for 3 gigawatts of capacity, enough to power 1.1 million U.S. homes. The project is expected to be in operation by the end of the decade.

Attentive Energy, a joint venture between EBW North America and TotalEnergies, placed the bid for $795 million. The other winning bids included Ocean Winds, a joint venture by EDP Renewables and ENGIE, Mid-Atlantic Offshore Development, a partnership with Copenhagen Infrastructure Partners, and Invenergy Wind Offshore. Atlantic Shores Offshore Wind, a partnership between Shell New Energies US and EDF Renewables North America, which was previously awarded a contract to develop 1,510 MW in offshore wind energy, New Jersey’s largest project, also is listed as a winner for the New York Bight.

“This week’s offshore wind sale makes one thing clear,” said Department of the Interior Secretary Deb Haaland, “the enthusiasm for the clean energy economy is undeniable and it’s here to stay.” The secretary also highlighted the innovative stipulations in the auction designed to promote the development of a robust domestic U.S. supply chain for offshore wind energy and enhance engagement with the commercial fishing industry, other ocean users, and underserved communities. The stipulations are also designed to advance flexibility in transmission planning and provide incentives to source major components such as blades, turbines, and foundations domestically and use union labor.

BOEM highlighted this auction as the next step in the efforts to develop the industry. The bureau noted that it has approved construction of the nation’s first two commercial-scale offshore wind projects in federal waters, Vineyard Wind and South Fork Wind, while it expects to review at least 16 plans to construct and operate commercial offshore wind energy facilities by 2025. Seven potential lease sales are also under development, including the New York Bight and offshore the Carolinas and California later this year, to be followed by lease sales for the Central Atlantic, Gulf of Maine, the Gulf of Mexico, and offshore Oregon all expect to be completed by 2025.