Wakashio Bow Towed Away From Mauritius While Investigation Continues

The situation in Mauritius remains confused as people continue to look for answers and sometimes contradictory or incomplete reports emerge. The oil recovery work continues while the captain of the Wakashio, now under arrest, has been brought before the authorities to offer his explanation to the events leading up to the ground and subsequent oil leak and breakup of the grounded bulker.

A statement from the owner and manager of the Wakashio, Nagashiki Shipping, confirmed the arrest of the captain and the ship’s chief officer provisionally charged with jeopardizing the safe navigation of the ship. “We will continue to support the crew and their families while awaiting future judicial decisions. We sincerely apologize for causing a great deal of inconvenience to everyone in Mauritius and all other parties involved, due to the grounding and resulting oil spill,” said Nagashiki.

According to the local media in Mauritius, the ship’s captain began the first of at least two days of testimony today by detailing his experience and credentials. Tomorrow, he is expected to go on the record with his version of events leading up to the grounding on July 25.

At the same time, Nagashiki confirmed that the bow section of the wrecked ship has now been towed eight miles offshore. According to the shipping company, the salvage tugs have “been instructed by the authorities to await further instruction to determine the best course of action.” This comes after reports surfaced that the French minister was concerned over the plan to sink the bow section in approximately 2000 feet of water and environmentalists complained that the area was a critical to whales. 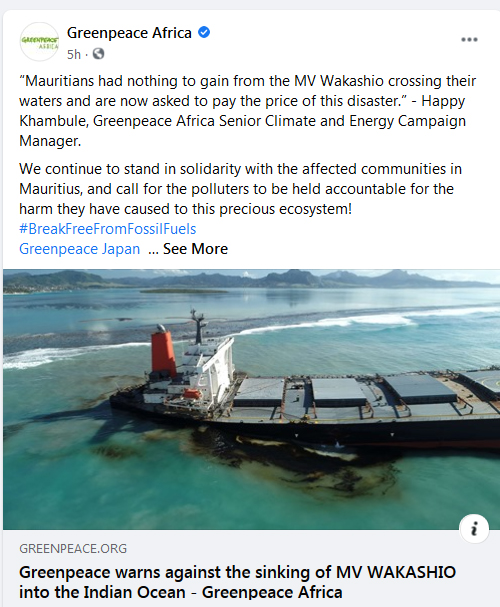 Representing the environmental community Greenpeace issued a statement criticizing the scuttling plan as well as the cleanup efforts. The statement quoted Happy Khambule, Greenpeace Africa Senior Climate and Energy Campaign Manager as saying: “Out of all available options, the Mauritian government is choosing the worst one. Sinking this vessel would risk biodiversity and contaminate the ocean with large quantities of heavy metal toxins, threatening other areas as well, notably the French island of La Réunion.”

It is also unclear what will happen with the stern section of the Wakashio which remains stuck on the island’s reef. According to Nagashiki, it is estimated that around 30 metric tons of lubricating oil and residues remain onboard as of August 17. Some reports have suggested that the stern will be scrapped where it sits, but the shipping company in its statement said, “The team of salvage experts are in close liaison with the relevant authorities and continue to work on a plan for the safe removal of the stern section of the vessel. The stern section is connected to two tugs and re-floating work is underway.” 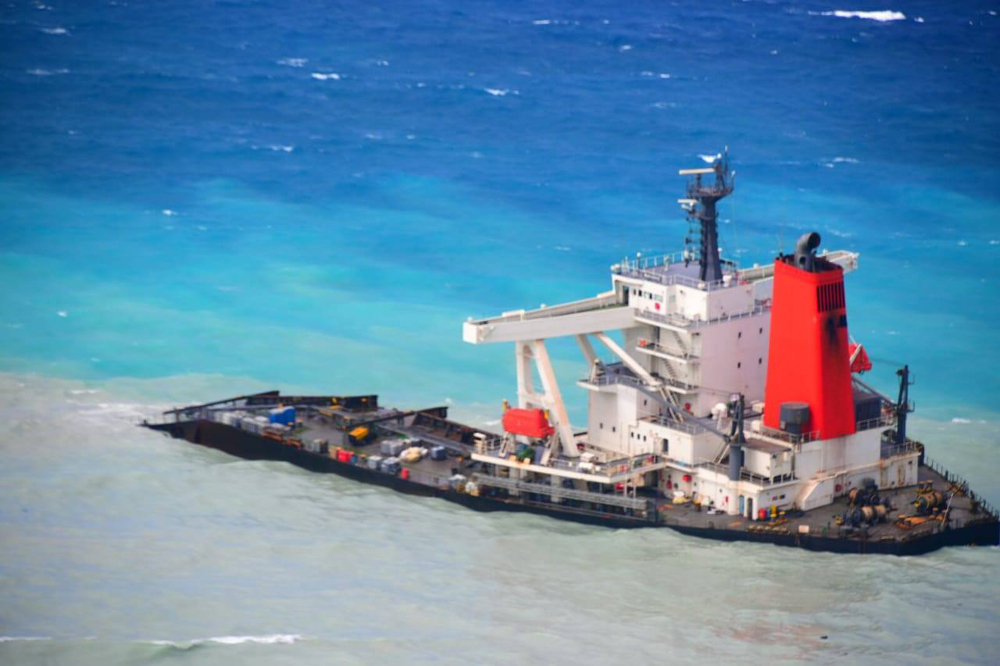 The local media continues to cast doubt on many of the explanations that have been offered for the circumstances leading up to the grounding. The newspaper L’Express now is also reported that one of the shore radar stations has been out of service for months. They have also repeated the reports that the Coast Guard tried in vain to contact the ship possibly for days before the grounding.

Mobilisation Nationale Wakashio, a public interest group seeking to inform and organize the recovery is reporting that as of August 18, 968 metric tons of oil liquid waste, 568 metric tons of solid waste sludge and 582 meters of saturated boom has been removed. The government however reported unacceptable levels of contamination showing up in local fishing areas expanding the exclusion zones for fishing around Mauritius.

Finally, the association for dry cargo shipowners INTERCARGO also issued a statement expressing its sympathy to the people of Mauritius “as they face the state of environmental emergency declared as a result of the grounding of the M/V Wakashio. No doubt once the facts are known, there will be valuable lessons to be learned from the grounding of the 203,000-dwt bulker off the coast of Mauritius, with the resulting damage to the marine environment and the livelihoods that depend on it.”

The association called for additional support for Mauritius and expressed its concerns “that such an incident can still occur today, despite the advanced navigational equipment, modern training methods, and up-to-date weather routing services currently available to the shipping industry.”