Despite the downturn in many segments that have led to increases in the numbers of ships sold for demolition, BIMCO reports, the VLCC crude oil tanker segment is in the midst of its second-longest streak without the sale of a single vessel for scrap.

November 2 will mark 500 days since the last VLCC was removed from service, according to Peter Sand Chief Shipping Analyst at BIMCO.  It was the end of June 2019 when a VLCC departed Jeddah, Saudi Arabia to Bangladesh for dismantling.

BIMCO attributes the lack of scrapings in the VLCC sector to strong crude oil tanker market earnings from August 2019 through July 2020. Sand notes in his analysis that this is even though by the end of October 2020, spot freight rates for all oil tankers sit at a loss-making level for owners and operators. 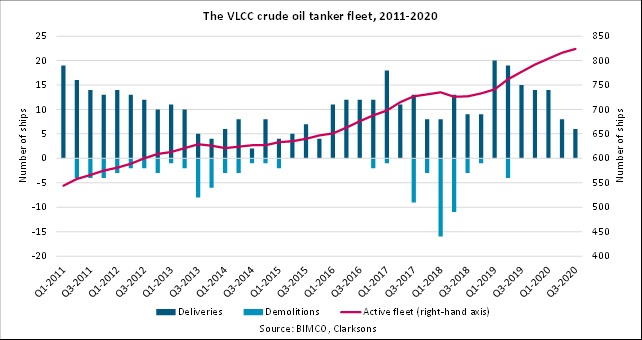 “Shipowners are die-hard optimistic people,” notes Sand. “This explains why the tanker market can stay low for a long time before anyone decides to call it a day and sell their ship for scrapping.”

Another issue that might be contributing to the reluctance to sell VLCCs for scrap is the lower values owners will realize in the demolition market. BIMCO notes that when the Japanese-built VLCC Watban was sold for scrap the market was at US$440 per ldt. That vessel contained a lot of steel and brought US$20.8 million to its owners when it was sold for scrap in June 2019 BIMCO reports. Built in 1996, Bahri sold the VLCC as part of its program to rid its fleet of older tonnage.

Shortly after that sale, scrapping prices dropped by 15 percent in the following months. Today, BIMCO says the steel price in Bangladesh is US$360 per ltd., and they note that candidates for demolition sale contain less steel than the Watban. The forecast the average VLCC would bring in around US$15 million if sold for demolition now.

“Any dead cat bounce during the coming winter season is likely to postpone a large scale cut in the active fleet. Since the last demolition sale, 57 newbuilds have been delivered, contributing to a fleet growth of 52% since the start of 2011,” Sand says.

BIMCO says it took an oil price nosedive in the second half of 2014 to fuel solid oil tanker market earnings. In 2019 and 2020, geopolitics and the COVID-19 pandemic have driven earnings higher. In both cases, higher earnings capped the incentive to demolish.