Virgin Voyages also plans to launch the “Scarlet Squad” program aimed at recruiting, supporting and mentoring female shipboard talent and growing opportunities to access leadership roles in onboard areas such as marine, technical and hotel management, which statistically show low numbers of female leadership. The company will release more details on the program in the company’s sustainability and social impact report later this year.

With operations in the U.S., U.K. and Europe, Virgin Voyages currently has three ships on order with Fincantieri. Scarlet Lady is scheduled to arrive at PortMiami in 2020 for her inaugural sailing season, where she will sail to the Caribbean hosting more than 2,700 passengers and 1,150 crew.

Each of the ships will be 278 meters (912 feet) long and 38 meters (125 feet) wide and will be built at the Fincantieri shipyard in Genoa, Italy. The 110,000 gross ton vessels will feature ABB’s Azipod propulsion, a gearless steerable propulsion system where the electric drive motor is in a submerged pod outside the ship hull. The ships will also be equipped with an energy production system of approximately 1MW which uses the diesel engine’s waste heat.

While at the shipyard to announce the name, Branson celebrated the float out of the vessel and also attended a steel-cutting ceremony for the line's second ship, which is due for delivery in 2021.

CEO Tom McAlpin has announced that the company will eliminate the use of single-use plastics. The initiative includes banning plastic items on board including straws, bottled water, other beverage bottles, condiment packets, shopping bags, food packaging, stirrers and take-away coffee and tea cups. Instead, the company will emphasize the use of recyclable and reusable materials across the ship.

Passengers will have access to complimentary filtered still and sparkling water at all bars and restaurants as well as specially designed Natura filtered water stations throughout the ship.

“Nothing makes me prouder than seeing companies like Virgin Voyages striving to make a positive impact on the world we live in,” said Branson. “Business is a force for good and can and must be the catalyst for global change.”

In May, Virgin Voyages revealed some of the interior design of the new ship. 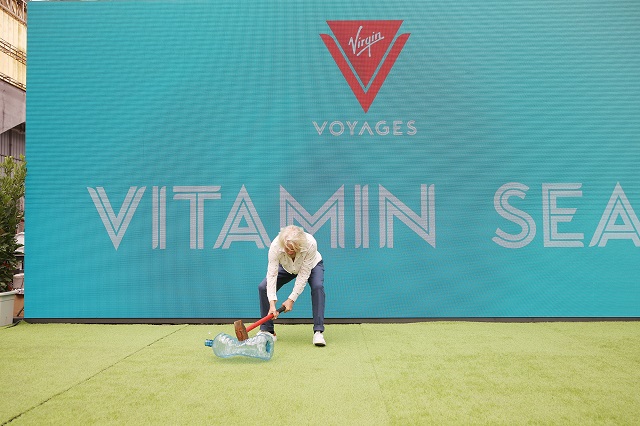