In a sign of optimism for the future of cruising, a new company recently announced plans to start operations in May 2021 sailing the world’s largest square-rigged passenger sailing ship. Named Tradewind Voyages the company is also coming to the rescue of one of the most unique cruise ships which after a dispute with her builders had faced an uncertain fate.

Tradewind will be operating the sailing ship, which was originally announced in 2015, under charter from the Brodosplit shipyard that built the vessel. Currently known simply as Brodosplit 483, the vessel will be rechristened the Golden Horizon. The first voyages are scheduled to depart from England and Scotland before the ship sails to Asia in the fall of 2021. The company plans to operate her in Australia, the Indian Ocean, and Japan before sailing for the Pacific Islands, Alaska, and the Americas. Initially, they plan to market in the UK and Ireland, but the unique nature of the ship should attract worldwide attention. 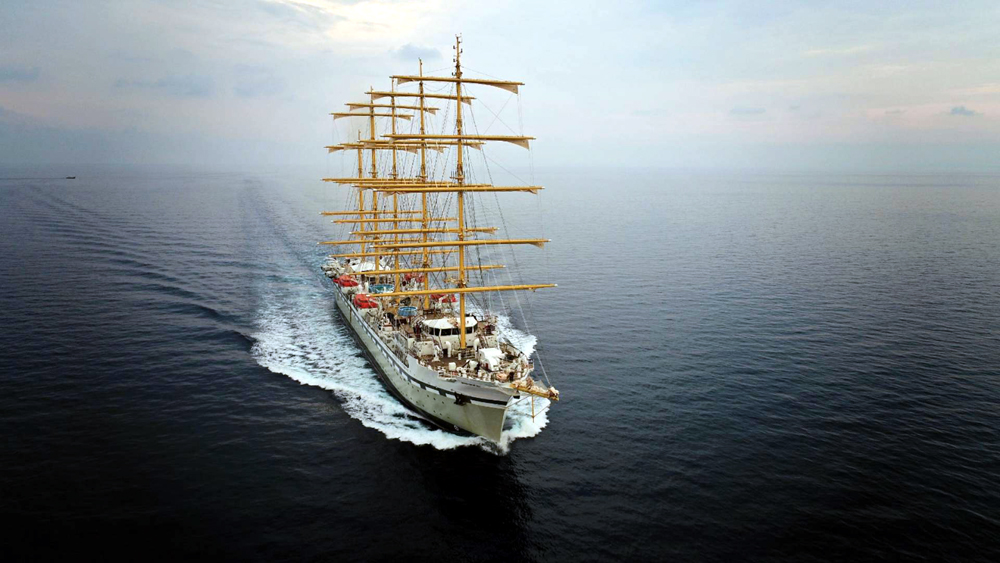 For a time it appeared as if the five-masted sailing ship was doomed to become a modern-day Flying Dutchman. She was announced with great fanfare in 2015 as Star Clippers revealed plans to build a replica of the 1911 sailing ship the  France II. The design featured over 6,000 square meters of sail area more than twice that of the famous Cutty Sark sailing ship. The ship would spend 80 percent of her time under sail with a speed of up to 16 knots.

At 8,770 gross tons and a length of 162 meters, the new ship would feature accommodations for 300 passengers and 140 in crew. She was to be built by Brodosplit in Croatia. As a modern-day passenger ship, she had to meet new safety requirements including safe return to port and she was to be given an ice-class hull.

Due for delivery in 2017, the new sailing ship was to have far more amenities than her inspiration. Passengers could enjoy 34 suites with balconies, four owner’s cabins, three pools, massage and beauty treatments, and even a fully equipped watersports platform.

The keel for the vessel was laid in December 2015, but difficulties delayed her launch until June 2017. Star Clippers said she would enter service in 2018, but as difficulties continued between the line and the yard, construction continued to fall behind the revised schedule. By the summer of 2019, each side was blaming the other. The order was canceled and legal actions began.

Ready for delivery, Brodosplit 483 as she was known started trials creating the unique images of a modern-day 5-masted bark at sea. The shipyard and its parent company DIV Group had been seeking a buyer or operator for the ship for nearly a year.