Nearly three weeks after the cutting began on the wreck of the Golden Ray, the St. Simons Incident Response team reports that they are making progress although it has taken far longer than anticipated.

The cutting operation began mid-day on November 6 after the VB-10000 heavy lift vessel had been positioned over the bow section of the capsized ro-ro in St. Simons Sound. While it is a very complex salvage operation, the cutting process was selected as it was believed it would be the fastest and most efficient of the options available to complete the salvage.

“The cutting process was carefully engineered and modeled, but it remains a highly complex operation. This is the first of seven cuts. During each cut we will continue fine-tuning our cutting parameters, including speed and tension of the chain, to improve its efficiency,” said Deputy Incident Commander Tom Wiker of Gallagher Marine Systems in a statement earlier in the cutting process. “Though the cut is taking longer than expected, we’re gaining valuable knowledge that will guide the rest of this operation.”

Since the cutting began, the engineers have also encountered several unforeseen issues. This included approximately 25 hours into the cut, the cutting chain broke. There were no injuries or damage to the VB-10000. Responders retrieved the chain and repaired the broken link while also inspecting the chain for any additional fatigue. 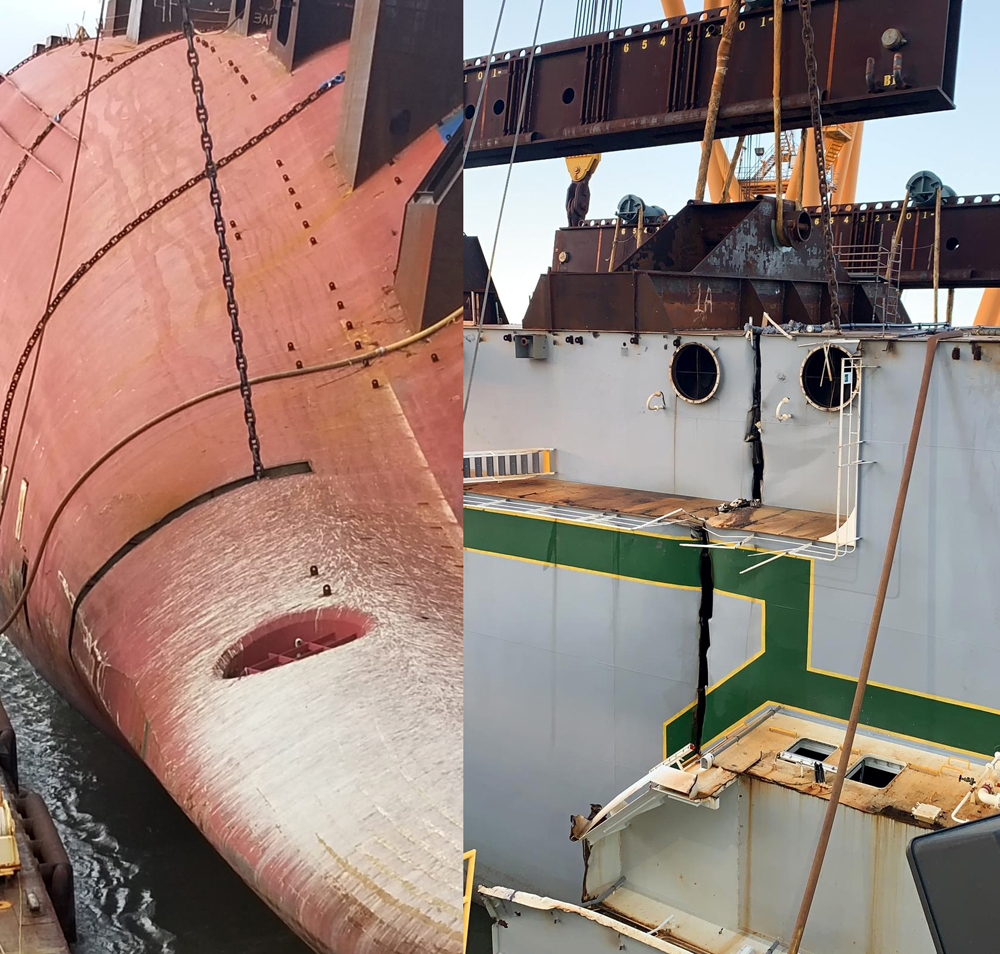 The cutting was also forced to briefly suspend operations and implement their heavy weather plan due to the expected impact of Tropical Storm Eta. The team used that pause to refine cutting equipment and methods to increase their efficiency. They made a number of modifications to the cutting apparatus which they reported would improve its performance.

At this point, the cutting has progressed through the keel, where they encountered as expected thick, dense structural steel. After gathering data and modifying operations, the engineers expect cutting to progress more quickly through the remainder of the section.

The lift equipment remains on-site prepared to undertake the next step in the operation once the cut is completed. In the meantime, the team has also been responding to small environmental issues during the cutting process. A light oil sheening was observed on the water and a small amount of oil was recovered. Also, responders continue to recover small pieces of debris, some oiled, within the proximity of the wreck and at the shoreline.

The team has not provided an updated timeline or a target for when they expect the first cut might be completed.