Spanish authorities announced the seizure of 20 tons of hashish valued at $470 million and the detention of eleven crew from a dilapidated old cargo ship that they believed to be part of a large, international drug smuggling operation. The National Police released dramatic video of the interception of the vessel approximately 40 miles southeast of the Canary Islands.

In a joint operation between the National Police and the Tax Agency, in collaboration with French and Irish authorities, the vessel had come under suspicion months ago. The authorities had linked the vessel to a company in Lebanon, which provides various logistics services related to maritime transportation. According to the authorities they identified the company in January 2021 and suspected that elements of the company were linked to a seizure of 13.6 tons of drugs in Libya in 2016.

Investigators working on the case supported by the CITCO (Intelligence Center Against Terrorism and Organized Crime) and the Maritime Coordination Center, observed how in July 2021, one of the ships owned by the Lebanese company departed Turkey and later made a series of significant changes to the vessel's registry, which raised their suspicions. They observed alterations in the name of the vessel and also a change of registry from Togo to Palau.

The 38-year old general cargo vessel, 4,800 dwt, was operating under the name Natalia. The vessel was being tracked as it crossed the Mediterranean. Investigators suspected it was heading to Morocco.

When the vessel reached the area near the Canary Islands, Spanish authorities decided to intercept the ship. Two patrol boats of the Customs Surveillance Service were dispatched on August 7 and located the Natalia the following day. The pursuit and interception were captured in the video released by the authorities.

The National Police reported that when their teams boarded the vessel it was found to be in poor condition with problems with its engine and leaking, creating a danger of sinking. The authorities said this was typical of the vessels used by smugglers which are often abandoned or sold for scrap upon completing the smuggling operation.

The Natalia was taken to the port of Las Palmas. An extensive search of the vessel on August 9 revealed the hashish in 638 bales hidden in a cargo of plaster in the ship’s cargo holds. Separately, in the crew accommodation areas, they also found 26 kilos of marijuana, which the authorities believe crew members were smuggling separately to sell for their own financial gains. The 11 crew members, all believed to be Syrians, were arrested and will be brought before the National High Court.

This is the second major seizure of narcotics the Spanish authorities recently completed off the Canary Islands. In May, they seized a tugboat carrying seven tons of hashish. There was no indication if the two cases were related. 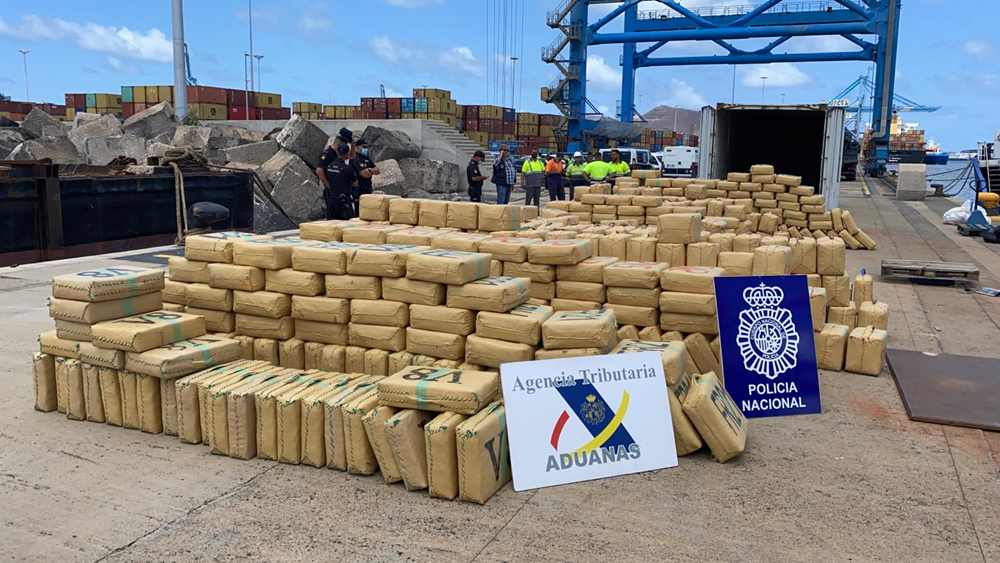