The Italian Coast Guard along with a Romanian vessel responded to a distress call in the Mediterranean on August 20. When they located the 131-foot super yacht Saga the vessel was reported to be in severe danger with worsening weather conditions that would ultimately claim the vessel.

The Romanian vessel working with Frontex in the Mediterranean was initially able to rescue the four passengers from the multi-million dollar vessel which had departed Gallipoli and was headed for Milazzo. When they located the vessel, it was approximately nine miles south of the famed tourist destination of Catanzaro. Located near the southern tip of Italy, the port has a world-famous marina catering to the super-rich and their yachts.

The Italian Coast Guard transferred the four passengers and one crew member that were aboard the Romanian patrol boat to their vessel and completed the rescue of four crew members that were still aboard the superyacht. They transferred all of them to shore where the crew quickly made arrangements for a tug to proceed to the site for a salvage attempt. 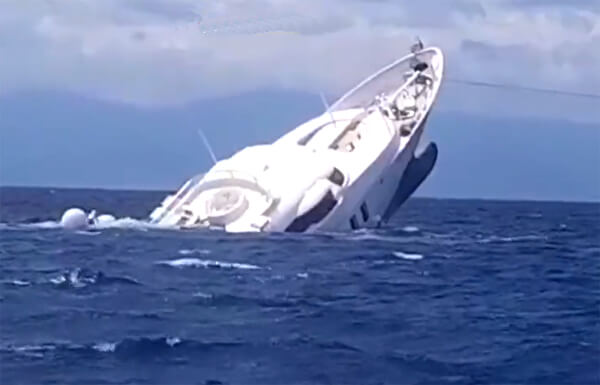 According to the Italian Coast Guard, they were successful in attaching a towline to the Saga and were attempting to maneuver her into port or possibly beach her for further salvage.

“The worsening of the weather and sea conditions,” the Italian Coast Guard reports, resulted in an “increasing inclination of the vessel on its starboard side. It made any attempt to strand the yacht, which sank in a short time, impractical.” The crew which was witnessing the salvage attempt from the tug reported that the winds had increased causing the vessel to roll and ultimately the water reached the flying bridge.

The Saga sank stern first. The Italian Coast Guard reports that prevailing conditions in the area make salvage impractical. They returned the crew to the port after the vessel was lost.