Video: Dozens of Warships Sail in Formation at RIMPAC 2018

Last week, naval vessels from over two dozen nations participated in a close-formation sailing exercise as part of the 2018 Rim of the Pacific (RIMPAC) maneuvers, the world's largest international naval exercise.

This year, China was not among the participants: it was disinvited over its military activities in the Spratly Islands. However, a Chinese Type 815 surveillance ship was observed near the exercises off Hawaii, monitoring the event from afar.

RIMPAC is also an opportunity for the partner nations to conduct joint amphibious assault trials. On Sunday, U.S. Marine Corps amphibious vehicles of the 3rd Marine Regiment unloaded U.S. and international forces for an amphibious landing demonstration at Pyramid Rock Beach, Hawaii (below), one of several amphib exercises in RIMPAC 2018.

For the first time ever, merchant marine experts contributed to maritime domain awareness aspects of the RIMPAC exercise, working together with their naval counterparts. During the exercise, the U.S. Naval Cooperation and Guidance for Shipping (NCAGS) partnered with the Oil Companies International Marine Forum (OCIMF) to inform decisionmaking in the Southern California area of this year's maneuvers. Capt. Elliott Donald (USN), training officer for Naval Surface and Mine Warfighting Development Center’s Mine Warfare Division, complimented the results of the partnership. “The capability and expertise they bring isn’t an intuitive skill, and their continued participation in RIMPAC and other exercises is valuable training for all participants," Capt. Donald said in a statement.

“This was a great opportunity for us to work on building our mutually beneficial relationships,” said Russell Pegg, maritime security adviser for the Oil Companies International Marine Forum. “The capability we build through training together will help support our mission to keep sea lanes open and assist in ensuring the safety of all mariners – naval and merchant.”

As in years past, the civilian merchant mariners of U.S. Military Sealift Command also provided extensive support for the exercise. Since June 26, USNS Henry J. Kaiser, USNS Rappahannock, USNS Carl Brashear and USNS Charles Drew have been delivering the fuel to power the participating vessels, as well as the dry goods that sustained the ships’ crews during the exercise’s underway periods. Over the monthlong exercise, MSC delivered over eight million gallons of diesel ship fuel, four million gallons of JP5 aviation fuel and 1,130 pallets of food and supplies during 101 resupply evolutions at sea. 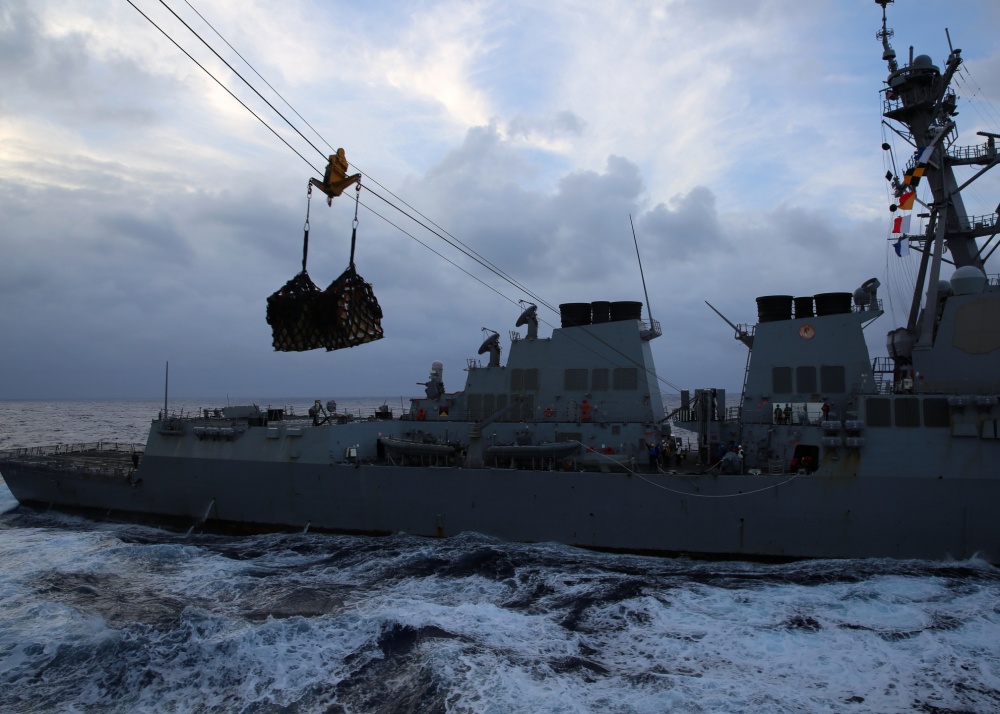 UNREPS between the USNS Carl Brashear and the destroyer USS Preble, July 17