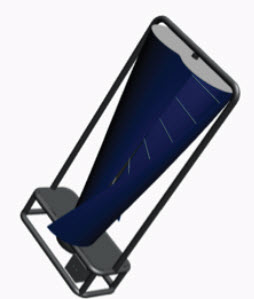 After initially testing a two square meter turbine with a nominal electrical production of about 2,380 kWh a year (nominal output 340W @ 10 m/s), the companies will test a system with 10 times the output.

Mikael Troberg, CEO of Bonum Engineering and Consultancy, says the benefits of the vertical wind turbines include that they generate electricity at low wind speeds, 24/7 and that they operate safely in all wind speeds as a result of a low turbine tip speed due to optimized geometry. He says they are also low noise, safe for birds and basically maintenance free. They are quick and easy to retrofit due to an innovative frame design. The technology is available for land and sea applications, with the model developed for ships having a frame for easy integration of turbine, generator and inverters.

The project comes as the IMO moves to promote energy efficiency to reduce shipping GHG emissions and a range of wind-powered options are being developed. In March, Norsepower's Rotor Sail solution received the first-ever type approval design certificate granted to an auxiliary wind propulsion system on board a commercial ship.

The E.U. forecasts that there could be up to 10,700 wind propulsion installations on bulkers and tankers by 2030. The International Windship Association notes that wind propulsion technologies are available in seven main categories:

• Soft Sail – both traditional sail and new designs of dynarig etc.
• Hard Sail – wingsails, foils etc. Some rigs have solar panels for added ancillary power generation.
• Flettner Rotor (Rotor Sail) – rotating cylinders operated by low power motors using the Magnus effect (difference in air pressure on different sides of a spinning object) to generate thrust
• Suction Wings (Ventifoil, Turbosail) – non-rotating wing with vents and internal fan (or other device) that use boundary layer suction for maximum effect.
• Kites – dynamic or passive kites off the bow of the vessel to assist propulsion or to generate a mixture of thrust and electrical energy.
• Turbines – using marine adapted wind turbines to either generate electrical energy or a combination of electrical energy and thrust.
• Hull Form – the redesign of ship’s hulls to capture the power of the wind to generate thrust.