In the United States, where the vaccines have reached wide availability, an increasing number of health organizations and port authorities are working with maritime organizations including the International Transport Workers’ Federation to inoculate crews while their ships are in ports. Major shipping companies are participating in these efforts, including Shipping Watch reports that crew from Maersk vessels have been inoculated in the United States. The cruise industry, which plans to require universal inoculations or its crew, has also been part of the U.S. program.  Port Canaveral, PortMiami, and the Port of Galveston were among the first to participate in vaccination programs for the cruise ship crews. Yesterday, May 20, the crew of Holland America Line’s Koningsdam began to receive vaccinations at the Port of San Diego in California. 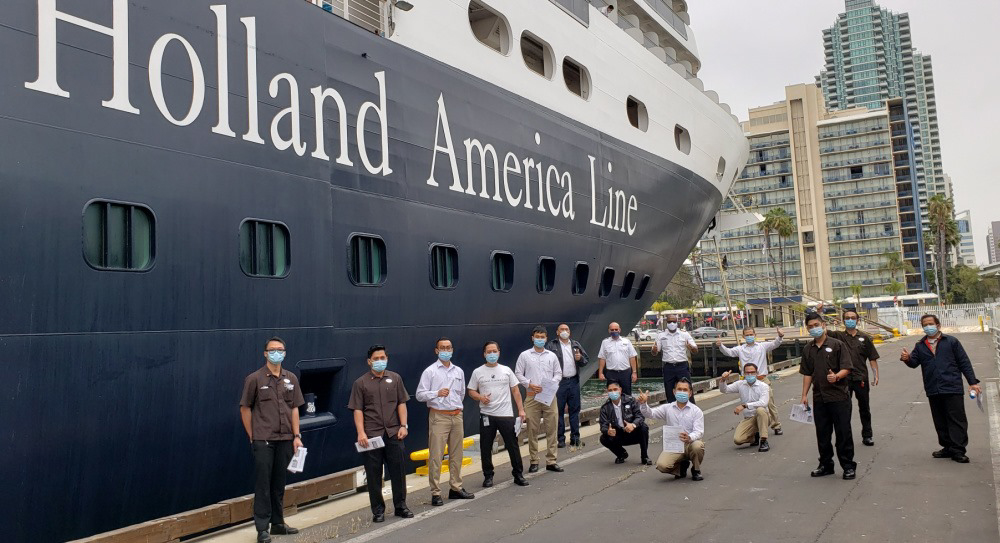 V.Group which providing manning for a broad range of ships also announced that it was rolling out a global vaccination program. Recently, 13 Indian seafarers working aboard a Falcon Maritime vessel, the Cabrera, were able to receive vaccinations at Port Everglades, Florida as part of the company’s program. Hey were also the first crew from V.Ships to receive their vaccine onboard their ship.

‘’We are grateful to the USA and in particular to the Port Everglades Authorities, for identifying the necessity for seafarers to be vaccinated,’’ said Franck Kayser, Dania Ship Management Managing Director.  V.Group has not made vaccinations mandatory for its crews but is recommending that all personnel onboard or onshore follow the guidance of their respective governments and get vaccinated against COVID-19 as soon as the vaccine is available.

The ITF is also reporting that it has been able to arrange for crews to receive vaccinations. Among the ports where this has been happening are Newport News, Virginia, Savannah and Brunswick, Georgia, Oakland and Long Beach, California, and Houston, Texas. Vaccinations are being offered to seafarers at the Port of Oakland weekly while the Medical University of South Carolina has donated 500 Johnson & Johnson’s Jansen vaccines for the program beginning May 24 in Charleston.

Australia has also begun a limited program to vaccinate crews on vessels operating from its Port Botany seafarers in New South Wales. Starting in June, the Netherlands also plans to begin a program to vaccinate all the seafarers working on Dutch-owned or managed ships. The labor group Nautilus also recently called for the United Kingdom to become an international seafarer vaccination hub. 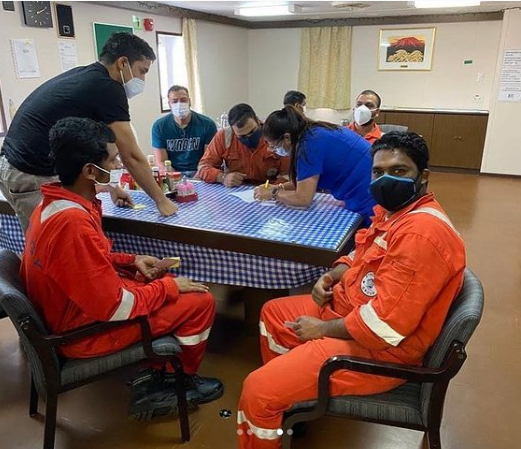 Crew at the terminal in Houston for vaccinations (ITF photo)

Despite the initial successes, the ITF is saying that the shipping industry remains in danger because of the lack of availability of the vaccine in many parts of the world and limitations requiring seafarers to get the vaccine only when they reach their home countries. The union is calling on world leaders to endorse universal access to Covid-19 vaccines.

“If the wealthy countries do not support patent waivers at the 8 June TRIPS Council meeting, then not only will more seafarers’ lives be lost – we will also miss our opportunity to be rid of the crew change crisis and the daily risk it places on essential supply chains,” said International Transport Workers’ Federation (ITF) Seafarers’ Section chair David Heindel.

They point to the COVID crisis sweeping India and the resulting travel restrictions that many countries placed on seafarers from India or who had been in the Indian region. “We are on the precipice of a third wave of the crew change crisis,” warned Heindel. “Now is the time for generosity and action from every kind of government.” The ITF believes that the crew change crisis can be brought to a close by the leading nations ensuring universal access to COVID-19 vaccines for seafarers.