The U.S. Navy has ordered the carrier USS Abraham Lincoln to return to Norfolk, Virginia after a one-week mission to provide aid to the Florida Keys.

The Keys were hit hard by Hurricane Irma, and the work is far from complete; USS Iwo Jima, USS New York and USS Farragut will remain on station to support the recovery effort. The three vessels have 2,400 sailors and marines between them, along with medium and heavy-lift helicopters to support logistics needs.

John Cornelio, spokesman for the Defense Department's Northern Command, told the Miami Herald that most of the military response effort in Florida is borne by 10,000 National Guard troops, most of whom are from in-state. The Guard has been manning shelters, clearing roads and distributing supplies across Florida, and will continue to support the state’s recovery.

During their six days on scene, Lincoln's crew contributed by supplying clean water to areas that lost access during the storm. The carrier’s helicopters flew water and supplies to NAS Key West, Homestead AFB, Port Everglades, Marathon and the USS Iwo Jima for distribution to survivors on shore. Lincoln aircrews also provided SAR services and medical evacuations for storm victims.

While the Lincoln's emergency response role is over, the recovery is far from complete. Cruise line Royal Caribbean has canceled all calls at Key West until the end of the month, citing the severe impact of the storm. Carnival Cruise Line has also rerouted three vessels that were due to call at Key West next week: the Carnival Breeze and Victory will stay one extra day at sea, and the Paradise will add one day at Grand Cayman.

At St. Thomas in the U.S. Virgin Islands, the major lines have canceled future calls for months to come (or longer), and they have not given firm guidance on when cruise tourism will return. Some analysts warn that the hard-hit island may not recover enough to welcome visitors until next year. 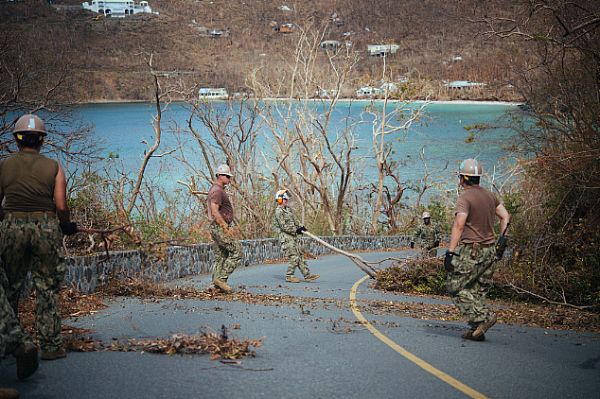