The U.S. Navy's newest and most advanced aircraft carrier, the USS Gerald R. Ford, is set to embark on her first official deployment departing on Monday, October 3. After years of a problematic testing and commissioning process, the Navy recently declared the carrier fully operational and now she is set to embark on a short cruise into the Atlantic as part of a multi-national NATO training exercise. Her first full deployment is now set for sometime in 2023.

"We're not in test mode. We are in operating mode. And all systems are go," Captain Paul Lanzilotta, commanding officer of the USS Gerald R. Ford told reporters during a briefing on the first deployment. "It's a momentous milestone. But, it's just another step along the way to bringing the ship to combat readiness."

The deployment comes 15 years after the Navy first confirmed its plans for the construction of its new class of carriers and nearly 13 years after the ceremonial keel laying. Costing more than $13 billion, the Gerald R. Ford was finally handed over to the Navy in 2017, despite ongoing problems in the commissioning of her new advanced systems.

The Ford has advanced arresting gear and is equipped with an electromagnetic aircraft launch system. The vessel’s weapons elevators proved among the most difficult elements to commission with reports of issues in the software. 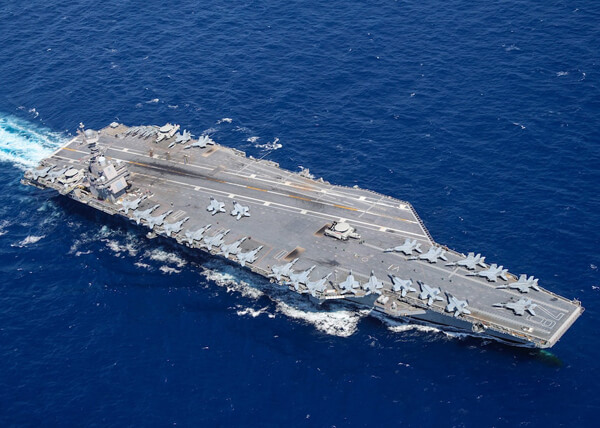 Ford underway in April 2022 with the air wing aboard (USN)

“The USS Gerald R. Ford Carrier Strike Group will deploy, integrating with Allies and partners, to demonstrate its unmatched, multi-domain, full-spectrum lethality in the Atlantic,” said Adm. Daryl Caudle, commander, U.S. Fleet Forces Command. “This trans-Atlantic deployment will strengthen our relationships, capacity, and trust to forge a more peaceful and prosperous world by leveraging the ‘One Atlantic’ Command and Control Concept.”

After departure, the Ford and her escorts which will include Destroyer Squadron 2, USS Normandy, USS Ramage, USS McFaul, USS Thomas Hudner, USNS Joshua Humpreys, USNS Robert E. Peary, and USCGC Hamilton, will coordinate with a nine-nation force from France, Denmark, Finland, Spain, the Netherlands, Sweden, Canada, and Germany. A total of 20 ships and 60 aircraft will be involved in the deployment which will involve approximately 9,000 personnel.

“This deployment is an opportunity to push the ball further down the field and demonstrate the advantage that Ford and Carrier Air Wing 8 bring to the future of naval aviation, to the region and to our Allies and partners,” said Rear Adm. Gregory Huffman, commander, Carrier Strike Group 12.

While the Ford is considered to be fully operational, commanders noted that they would continue to be conducting operational tests during the deployment and called the short cruise a “stepping stone,” toward full operations in 2023. They noted that while there will be a full representation of aircraft during the current cruise, the carrier is not taking the full carrier air wing to sea.

The Navy is hailing the cruise as a key step in the program which will ultimately see four carriers of the class built and deployed.