The first-in-class carrier USS Gerald R. Ford is ramping up towards a series of shock trials designed to test her systems for resilience and survivability in combat. The U.S. Navy carries out the dramatic experiments - typically conducted as a set of three explosive "shots" of increasing intensity and proximity - for each new class of surface combatants.

Ford is among the most complex vessels afloat, and with a construction cost of $13.3 billion, she is easily the most expensive warship ever built. In an attempt to achieve a technological leap forward, the Rumsfeld-era defense planners who designed Ford specified all-electromagnetic systems for her aircraft launch and recovery gear and her weapons elevators. The process of commissioning these systems has been a public source of difficulty for the Navy, and it has contributed to an estimated six-year delay in USS Ford's first deployment.

On May 19, Dr. Raymond O’Toole, Jr., the Pentagon's acting director for operational test and evaluation, conducted a walkthrough with Ford's crew to see whether the vessel is ready to conduct shock trials. Without commenting on the ship's operational readiness, O'Toole commended the crew. "The Ford team obviously takes a lot of pride in the ship’s appearance and upkeep, and I am confident that we are on track to accomplish this historic test event," he said in a statement. 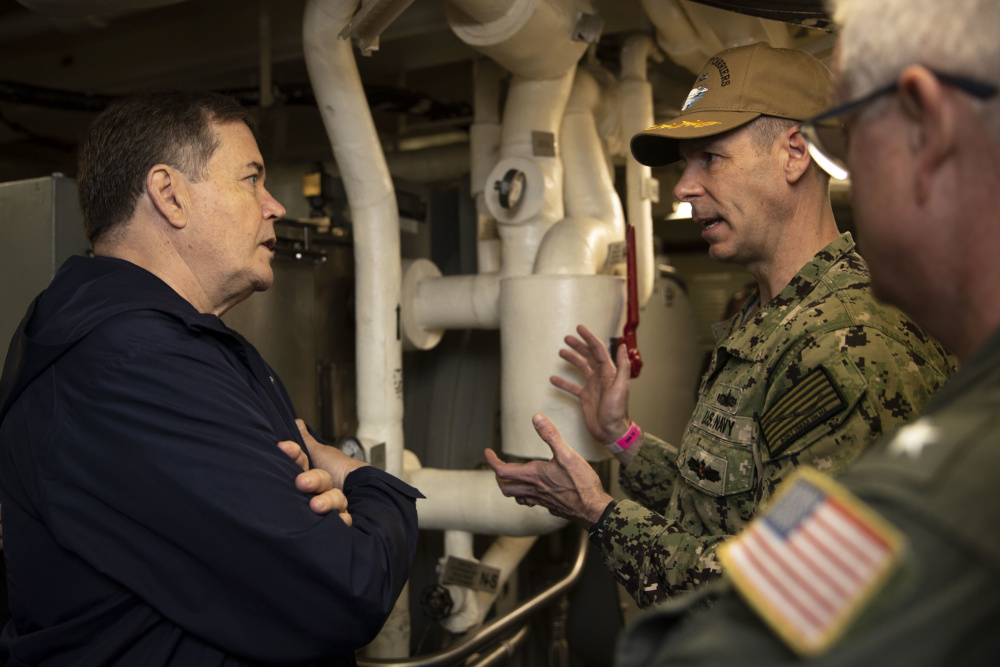 O'Toole, left, converses with Capt. Brian Metcalf, program manager for the Ford class, during an inspection of the vessel's electromagnetic launch system (USN)

“All precautions are being taken to protect the crew’s safety,” said Ford's CO, Capt. Paul Lanzilotta. “We are ready for the shock evolutions, but we have a lot more training to do. We’re going to validate and continue to refine our processes, practice, and prepare.” Lanzilotta's team plans to increase damage control drills and run through the shock trial sequence more than ten times before the first event.

The Navy said that damage to ship's systems and equipment is not unusual during a series of shock trials, but it does not expect any effects that would affect future operations or put the crew at risk.

Over the past 18 months, Ford's crew has made strides in bringing the ship to life. Working with contractors, they have activated and commissioned seven out of the ship's 11 weapons elevators - a significant achievement, as none were working when the Navy signed off on delivery of the vessel in 2017.

In addition, the carrier's troubled electromagnetic aircraft launch system (EMALS) and advanced arresting gear (AAG) have now completed over 8,000 catapult and trap cycles, including about 7,300 during the past 18-month cycle of sailings and pierside repairs. This is approximately equal to the number of launches and recoveries that would be conducted in a typical six-month carrier deployment, according to the Navy.