Concurring with the National Transportation Safety Board, the U.S. Coast Guard has issued a recommendation that all DUKW-type amphibious passenger boats should remove overhead canopies so that occupants can quickly escape in the event of an emergency.

After the sinking of the DUKW Miss Majestic in 1999, the National Transportation Safety Bureau and the Coast Guard found that the vessel lacked enough reserve buoyancy to remain afloat and upright when flooded. Additionally, the canopy and side curtains on the Miss Majestic restricted passengers' ability to escape.

Contrary to NTSB recommendations after the Miss Majestic accident, the Coast Guard did not ban overhead canopies on certain DUKW boats. NTSB advised that for DUKWs that lack enough reserve buoyancy to stay afloat when flooded, canopies should be removed in order to make sure that passengers could get out in the event of a sinking.

Instead, the Coast Guard laid out rules for DUKW boats to achieve a standard of safety equivalent to other Subchapter T vessels (T-boats), including modifications to the side curtains to improve emergency egress. "We believe the guidance [on DUKWs] is sufficient to ensure that adequate means of escape are provided on amphibious passenger vehicles that have canopies installed," the USCG concluded at the time.

NTSB protested the Coast Guard's decision not to ban canopies, and in 2007 it classified the USCG's response to its recommendation as an "unacceptable action."

It would not be the last clash between the agencies on this safety issue. On July 19, 2018, the DUKW Stretch Duck 7 encountered a sudden storm on a brief tour on Table Rock Lake in Branson, Missouri. The boat quickly flooded and went down by the stern at a position about 250 feet from shore. 17 out of 31 people on board the boat died. 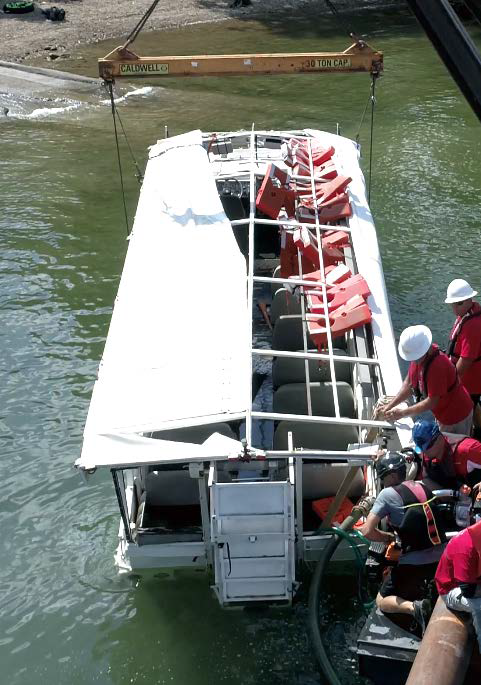 Like the Miss Majestic, Stretch Duck 07 was fitted with a full-length canopy of metal framing and vinyl (left). According to NTSB, the canopy and its frame made it harder to get out of boat after it sank. "Several surviving passengers recalled hitting various impediments and being pinned against the canopy before they could break through it to escape upward from the submerged vessel," NTSB wrote in an intial report on the accident. "Some of the fatalities likely resulted from the presence of the canopy and its associated framing."

In a circular issued Wednesday, the Coast Guard concurred, saying that its preliminary findings align with NTSB's recommendation to remove DUKW canopies. However, the Coast Guard's guidance is still voluntary. "Owners and operators opting to remove canopies shall work with their local Coast Guard Officer in Charge of Marine Inspection (OCMI) and the Marine Safety Center to arrange an inspection and stability review prior to recommencing operations," the Coast Guard Office of Commercial Vessel Compliance wrote.

The circular did not address NTSB's recommendation that increased reserve buoyancy should be required for DUKW passenger boats. The USCG disagreed with this recommendation in 2002, noting that there are no damage stability requirements for passenger vessels of the size and operating profile of DUKWs.