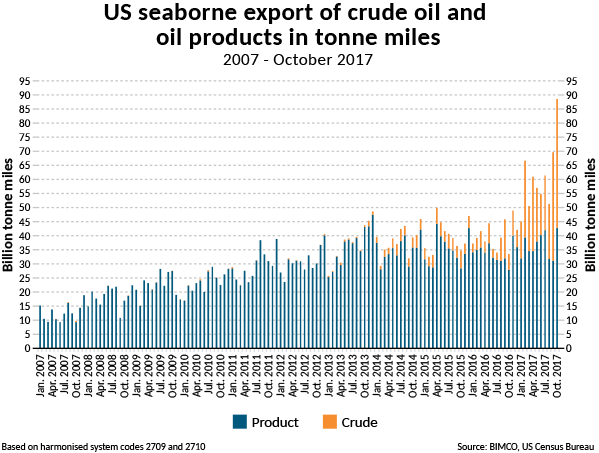 For the first 10 months of 2017, the U.S. seaborne export of crude oil has increased 151 percent compared to same period last year. This amounts to an additional 20 million tons of crude oil being available to the shipping market, equivalent to 7.5 VLCC cargoes being exported more per month compared to last year.

In October alone Europe has already taken an amount of crude oil similar to the amount imported in each of the previous quarters of 2017. Thereby, the average sailing distance has dropped a bit from Q3 2017, but still remained above 7,000 nautical miles. 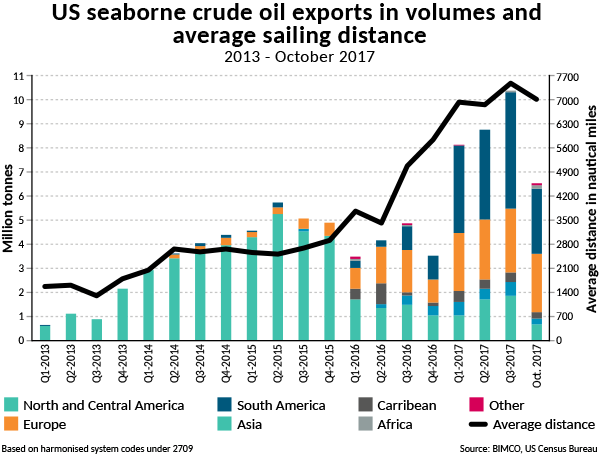 In terms of volume, the three largest importers of U.S. seaborne crude oil in 2017 are China, Canada and the United Kingdom. China is by far the main player, importing 25 percent of total exports, while Canada 15 percent and United Kingdom has imported nine percent.

As 97 percent of all seaborne US crude oil is exported from the US Gulf. The sailing distance to China is double the distance of Middle Eastern export to China and thereby tonnage is tied up for longer periods, benefiting crude oil tanker demand.

Texas based ports’ market share has surged, together with the U.S. seaborne exports of crude oil. The U.S. has exported 79 percent of all crude oil via sea from Texas during the first 10 months of 2017, up from 69 percent for the same period in 2016. In terms of volume, the Texas loading area has ramped up their export of crude oil by 186 percent for the first 10 months of 2017 compared to the same period in 2016. This amounts to an additional export of 17.3 million tonnes, 85 percent of the total increase in U.S. seaborne crude oil exports.

The most influential ports are Corpus Christi, Beaumont, Houston and Gramercy, exporting 33 percent, 21 percent, 15 percent and 14 percent of U.S. seaborne crude oil respectively. Corpus Christi port will have VLCC accommodating terminals by the end of 2018. Thereby crude oil destined for China will travel 15,000 nautical miles instead of 10,000. This will bring considerable extra tonne-miles to the crude oil tanker shipping industry.