The Joint Coordination Center based in Turkey overseeing the export of grains from Ukraine announced a revision to the shipping route for the Black Sea Grain Initiative to further aid the movement of ships. As the first month of the program comes to a close, everyone agrees it has been a success and the latest effort is designed to further facilitate the safe movement of ships from the three Ukrainian ports.

“This route has been adjusted following an initial three weeks of operations. It allows for shorter transit in the maritime humanitarian corridor and easier planning for the shipping industry,” the JCC announced. The changes are effective immediately starting August 26.

The new route is 320 nautical miles long and connects the three Ukrainian ports, Odesa, Chornomorsk, and Yuzhny, with the inspection areas inside Turkish territorial waters. The JCC explains that the maritime humanitarian corridor, which makes part of this route, extends from the boundary of Ukrainian territorial seas to a southern waypoint. The new coordinates have been disseminated through the international navigation system NAVTEX with all vessels advised to alter this planning to follow the new path.

Under the UN-brokered agreement which is being implemented by Turkey, the JCC notes that “no military ship, aircraft, or unmanned aerial vehicle may approach within a radius of 10 nautical miles of any vessel engaged in the Initiative and transiting the corridor. The procedures state that any commercial vessel encountering provocations or threats while transiting the corridor should report immediately to the JCC.”

In the first three weeks of the program, data from the UN’s Black Sea Grain Initiative Joint Coordination Center shows that a total of 87 voyages have been approved by the JCC, with seven currently pending. A total of 39 voyages were approved outbound from the three ports. The majority of the vessels (23) are operating in and out of Chornomorsk with a total of 845,496 metric tons of foodstuffs having been exported from Ukraine. At the current pace of exports, they will approach the 1 million ton mark by the end of August.

UN Secretary-General António Guterres concluded his recent visit to Ukraine with a visit to first-hand see the export operations calling the food leaving Ukraine a vital supply to the world. “A powerful demonstration of what can be achieved, in even the most devastating of contexts, when we put people first,” he wrote in a social media posting.

In the last two and a half weeks, a total of 26 vessels have proceeded inbound to Ukraine with another 22 approved for the voyage and currently 14 have completed or are underway on their round trip after loading. Nearly two-thirds of the exports so far have been corn, but wheat is beginning to depart with already over 100,000 tons having been loaded for export. Other exports include soybeans, sugar beets, and sunflower seeds, oil, and meal.

As another demonstration of the importance of the efforts, the UN highlights that the exports have already gone to a dozen different countries. The list includes China, Djibouti, Egypt, Greece, Iran, Ireland, Italy, Netherlands, Republic of Korea, Romania, and Turkey.

The current pace of the operation shows that six to seven vessels a day are being inspected and cleared by the JCC in Turkey. Guterres call all aspects a success saying he was confident that it would make a critical difference in getting food supplies from Ukraine to impoverished nations. 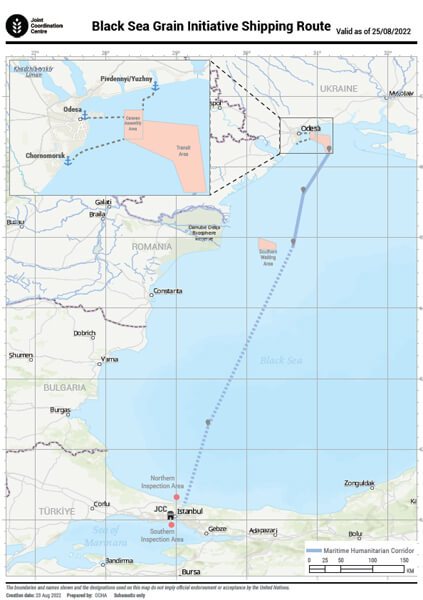