“The future USS Indiana shows the increased capabilities that our industrial partners bring to the fleet as we deliver the Navy the nation needs,” said Secretary of the Navy Richard V. Spencer. “This submarine sends a signal to friend and foe alike that we will maintain supremacy under the waves, and extend our lethality and readiness in every domain.”

Indiana also has special features to support Special Forces, including a reconfigurable torpedo room which can accommodate a large number of personnel and all their equipment for prolonged deployments and future off-board payloads. Also, in Virginia-class SSNs, traditional periscopes have been replaced by two photonics masts that host visible and infrared digital cameras atop telescoping arms, which are maneuvered by a video game controller. Through the extensive use of modular construction, open architecture and commercial off-the-shelf components, the Virginia class is designed to remain at the cutting edge for its entire operational life through the rapid introduction of new systems and payloads.

SSN-789, which was built at Huntington Ingalls Industries-Newport News Shipbuilding in Newport News, Virginia, is 7,800-tons and 377 feet in length, has a beam of 34 feet and operate at more than 25 knots submerged. She is designed with a reactor plant that will not require refueling during her lifetime.

The submarine, which began construction in 2012, will be the third U.S. Navy ship to be christened with the name Indiana. The first Indiana (BB 1), the lead ship of her class of battleship, served in the North Atlantic and later participated in the blockade of Santiago de Cuba during the Spanish-American War.

The second Indiana (BB 58) was a South Dakota-class battleship that earned nine battle stars for her service in the Pacific Theater in World War II. The ship fought in the Battle of the Philippine Sea and participated in the invasions of Tarawa, Kwajalein, and Okinawa, and bombarded Saipan, the Palau Islands, the Philippines, and Iwo Jima. Indiana earned nine battle stars for service in World War II. 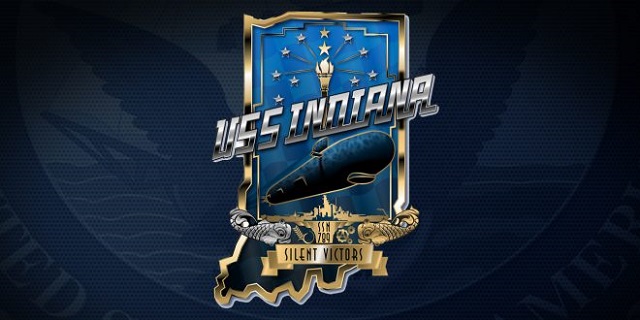