Coast Guard Academy mechanical engineering cadets have been prototyping a new and improved rescue basket, which could revolutionize the way the Coast Guard conducts search-and-rescue missions onboard the MH-60 Jayhawk helicopters.

“In 2009, the Research and Development Center conducted an internal Coast Guard study,” said M.J. Lewandowski, a research project manager for the RDC. “The study noted that the Coast Guard’s ability to respond to mass rescue incidents was, and still is, somewhat limited in the methods available to remove large numbers of people from a hazardous marine situation quickly and safely.”

The RDC and Academy leadership approached Breviario and his capstone group at the beginning of their senior year to see if an improvement could be made to the current design, which would increase the Coast Guard’s effectiveness during mass rescue incidents. 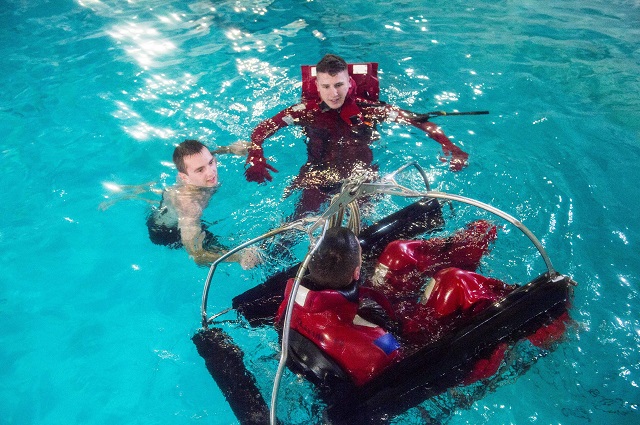 “We have added a means of entry that is easier for people who may be injured or have limited mobility,” said Breviario. “We have also maximized the space dimensions of the basket, given the dimensions of the MH-60 Jayhawk cabin. With these modifications we have made the basket more accessible, decreased the amount of time needed per hoisting evolution, and improved upon the effectiveness of the Coast Guard during mass rescue incidents.”

The new design, which is roomy enough for two individuals to comfortably sit in the basket, allows Coast Guard operators to shave off precious time during mass rescue situations. During mass rescue scenarios where 18 or more victims require helicopter assistance, the cadets have determined that the new basket could cut the time required to get everyone hoisted by half.

“The team was tasked with improving the Coast Guard’s response in a search-and-rescue scenario,” said Dr. Ron Adrezin, a mechanical engineering professor and project advisor. “The RDC needed the project to meet very specific criteria and the cadets were able to produce a well-designed project that met all of these needs.”

Cutting down on the time required for Coast Guard rescue operations by adding a means of entry and increasing the dimensions were not the only alterations the cadets made to the rescue basket. They also reconfigured the flotation system of the basket, which increased the buoyancy of the basket by 79 pounds of force. This upgrade will also allow for increased comfort of victims within the basket, as they will be surrounded by buoyant material on all sides.

Breviario and the rest of his capstone group will graduate this May with degrees in mechanical engineering, and will enter the fleet as Coast Guard ensigns. Their project has garnered interest from the Office of Aeronautical Engineering and the Aviation Logistics Center, who will consider whether to take the project further into a refinement and testing phase.

“Their project absolutely showcases what they’ve learned during their four years as engineering students, as well as pushed them to go beyond what we taught them and learn new topics and techniques on their own,” said Cmdr. Matthew Walker, a Coast Guard Academy mechanical engineering instructor and U.S. Coast Guard pilot. “I am intrigued by the team’s approach to this project and to see where it goes from here.”

Breviario hopes to see the design implemented into the fleet as the new standard rescue basket used in Coast Guard operations. The capstone group is currently pursuing a patent for their design and waiting on the RDC to decide if they are interested in further testing.

“We feel extremely proud of what we have accomplished this semester, and along the way, we have gained a lot of traction from our sponsor and aviation operators in the fleet,” said Breviario. “We would love to see our project make it to the fleet in the future, but even more so we feel that we have taken the next steps in providing a solution to a problem the Coast Guard faces on numerous occasions each year.”