News of the second shipwreck arrived with the rescue of three survivors who were interviewed by the U.N. International Organization for Migration (IOM) staff Saturday on the Italian island of Lampedusa. The survivors said that after about 10 hours at sea the dinghy started to take on water and many of its passengers drowned.

The three men managed to stay afloat for several  hours before being spotted by an Italian Navy patrol plane some 50 miles off the Libyan coast. Subsequently, they were rescued by an Italian Navy helicopter and brought to Lampedusa. The survivors explained that among the people drowned were 10 women, one known to be pregnant, and two children, including a two-month-old toddler.

The information came less than 24 hours after news was confirmed of a shipwreck off the coast of Spain in which 53 African migrants are believed to have drowned. There was one surviving witness of that tragedy, which occurred the night of January 17.

These were not the only rescue operations carried out in these last few days in the Mediterranean Sea. The NGO ship Sea Watch rescued another 47 migrants, and two days ago 68 migrants were rescued by the Italian Coast Guard and brought to Lampedusa. IOM Libya also reported on Saturday that at least two search and rescue missions carried out by Libya returned dozens of men, women and children to shore. 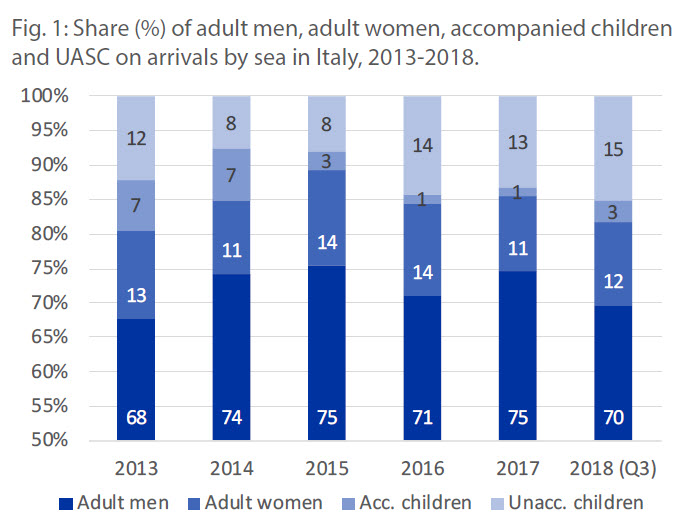 According to the compilation of available data from national authorities and IOM offices, a total of 133,489 migrants and refugees arrived in Europe between January and November 2018. An estimated 81 percent of the overall population crossed the Mediterranean Sea (108,246).

IOM regularly conducts surveys to understand the profiles of unaccompanied children disembarking in Italy. 84 percent of the 754 surveyed in 2017 and 2018 reported to have traveled alone. At the time of their departure, 43 percent intended to reach Italy, 18 percent had Europe as a general destination in mind and 14 percent reported to be aiming to stay in Libya for work. Once in Italy, the majority reported to be willing to stay in the country (79 percent), and a few reported the intention to reach Germany (four percent), France (3.8 percent), the United Kingdom (3.6 percent).

Many children described long and difficult journeys: 32 percent of those interviewed spent more than a year in Libya, while 36 percent transited through four or more countries before arriving in Italy. The reported cost of the journey is high, usually including transportation and living expenses, bribes and ransoms. Most, 80 percent, reported exposure to exploitative practices (unpaid work, forced work, unlawful detention, arranged marriage), experienced physical violence (88 percent) and suffered from threats of sexual violence (30 percent).

Most children interviewed (63 percent of those traveling without their families) claimed to have completed basic (primary or lower-secondary) education, while 33 percent stated they had never attended school.

In line with existing international obligations in relation to the rights of the child, the IOM upholds the principle of the best interest of the child at all times, including the right to family reunification, and it supports relevant authorities to respect this principle by identifying sponsoring relatives through paperwork or DNA testing. The right to family life is a fundamental human right, according to the Universal Declaration of Human Rights.