Two cruise ships have joined in the efforts to aid New Orleans and Louisiana in the recovery from the damage left behind from Hurricane Ida. The cruise industry has a long history of working with both public and private enterprises in these situations and currently two ships have been chartered to act as housing for the relief efforts.

The Federal Emergency Management Agency (FEMA) contracted with Carnival Cruise Line for a short-term charter of the cruise ship Carnival Glory. The 110,000 gross ton cruise ship had recently arrived in the New Orleans area and was due to resume cruises in September, but the commercial trips had been postponed in the wake of the hurricane.  The cruise ship rode out the hurricane by diverting west towards Mexico.

The Carnival Glory arrived at the Port of New Orleans on Friday, September 3, and underwent a required U.S. Coast Guard inspection. According to the cruise line, the ship began provisioning food, water, and materials to prepare to house up to 2,600 hospital workers, first responders, city and utility workers, and other emergency personnel. The ship will stay in port and serve as emergency housing for frontline workers directly involved in the city's infrastructure recovery and healthcare needs.

"While we want to provide the city of New Orleans with an economic boost by restarting guest operations, we want to first provide this critical housing support to address emergency needs and to get power restored to the region," said Christine Duffy, president of Carnival Cruise Line.

Current plans call for the Carnival Glory to provide housing through the end of next week, September 18. Carnival Cruise Line canceled the September 5 and 12 cruises but plans to resume sailing on September 19. 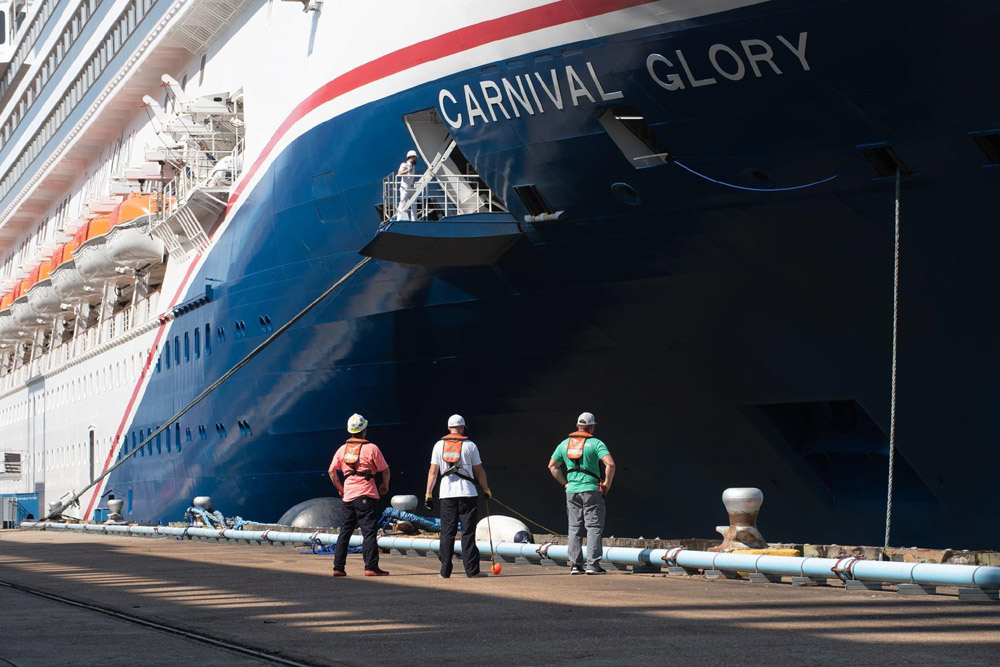 This morning, September 7, a second cruise ship, the Grand Classica operated by Bahamas Paradise Cruise Line from Florida also arrived in New Orleans. The 52,926 gross ton cruise ship has been privately chartered to Entergy, the Louisiana power company. The ship, which had resumed cruising in July, was loaded with bottled water, food, and supplies in its homeport of Palm Beach, Florida before departing for New Orleans on September 4.

According to Entergy and the cruise line, the cruise ship will stay in New Orleans for up to a month. During that time, it will provide housing for up to 1,500 personnel that are working to rebuild the power and communications grid in southern Louisiana.